Skip to content
Godzilla is far happier being driven like a sports car – use it like it’s meant to be and the music sounds solid gold, blogs intrepid tester, Dan Scanlan. 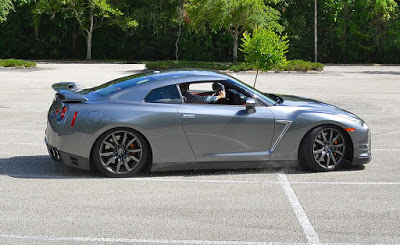 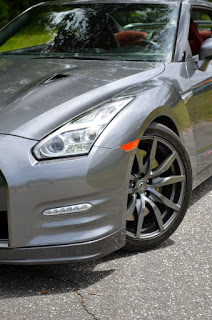 Godzilla is a noisy beast. The run-flat tires rumble, the turbos and wastegates whistle and chirp, and the all-wheel-drive gearing on our 15,000-mile-old test car grumbles as the car rolls off. There’s wind noise. Bose Active Noise Cancelation was added, plus more sound deadening. The result is a car that works OK for daily commuting, still noisy but comfortable for two and excels as a road rocket!

The 3.8-liter, 545-horsepower (up from 480 horsepower in 2009) V-6, below, is torque rated at 463 pound-feet. It has plasma-sprayed bores, a symmetrical independent intake and exhaust manifold system with twin IHI turbochargers, an oil-cooling system and wet and dry sump oiling. It’s got a carbon fiber-reinforced engine bay stiffener, and an alloy plate that says Izumi Shioya built the engine. There’s a paddle-shift sequential six-speed dual-clutch automatic with separate wet clutches for odd (1, 3, 5) and even (2, 4, 6) gears – the next one is always ready to very quickly slot in. A carbon fiber drive shaft takes power to a rear transaxle biased toward rear drive. 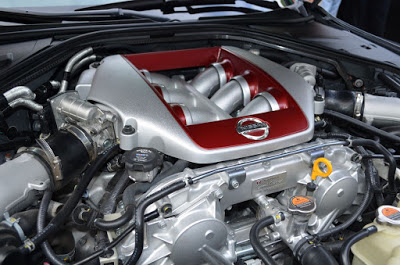 Leave the center dash-mounted driving control switches in “Normal” and there was a brief lag before the turbos spooled up, then we surged ahead to hit 60 mph in 4 seconds with rapid-fire shifts and 100-mph in 9.8! Our 2009 test of the first GT-R saw 60 mph in 4 and 100 mph in 9. Full boost reads about 15 psi, coming in right after launch so the rear tires sideslip a bit before all four grabbed. Then it goes and never seems to run out of steam.

But set the dashboard switch to R and the dual-clutch automatic fires off precise high-speed shifts and gas-blipping downshifts. Hold the middle switch up and the suspension goes really firm. Hold the switch on the right up, and stability and traction control are eased back, stepping in only when needed.  Red lights confirm launch control is set. 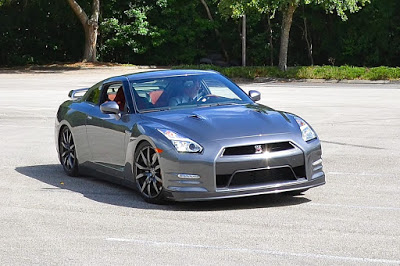 Left foot brake and right-foot throttle to 4,000-rpm, and let that brake go. We were held in our seats by 1 G of force as 60-mph was there in 3.2 seconds, with 100-mph in 8.8. All four tires grabbed. Downshifts were quick and precise, but not abrupt. The paddle shifters are long, with grippy leather backing, and easy to grab. They execute fast shifts, while the exhaust note at full scream was throaty and exotic. We got 16 mpg after a day of fairly quiet highway driving.

The midship platform has independent double-wishbone front, and independent multi-link aluminum rear suspension, both with an integral tube-frame structure. Its all-wheel drive system is rear drive-biased with the ability to vary torque split from 0:100 to 50:50 depending on speed, acceleration, steering, tire slip, road and yaw rate. 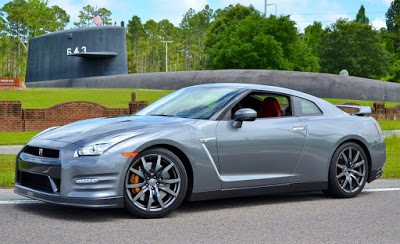 For 2015, the suspension gets modified front stabilizer spring rates and updated bush links to reduce load fluctuation between the four wheels for better road handling and grip. Nissan said this helped offer a more relaxing, comfortable ride and improved straight-line stability due to less small steering corrections. And the Bilstein shock absorber system adds a “Comfort” setting to “Normal” and “R.”

On comfort suspension, the ride was firm but livable, with serious buffering on rebound, yet still showing some jitter on rough roads. You still feel and hear the tires. On “R,” it had a bit of a brittle edge on rougher asphalt and the front tires tram-lined on grooved roads. But the car feels in control when pushed.

Begin to use the GT-R and the car corners on rails, understeer on turn-in if pushed. Power out of a turn and the rear-drive bias shows as the tail peeks out, caught by suspension and rubber with a hint of traction control. The new suspension is more forgiving in a mid-corner bump, never getting unsettled. There’s minimal body roll, the display reading up to 1 G of cornering on our skidpad, understeer chewing at the front tires at a high limit. 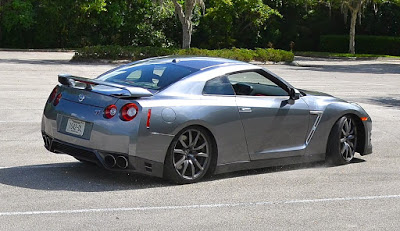 Switch it all to “R,” which allows the stability control to kick in higher, and we had more understeer when pushed on the skidpad, controllable by throttle. The torque split stays mainly with the rear wheels, although a full power launch saw a 50/50 split to the front transaxle under full power. A high-speed run down a curving road let the car hold on and stitch each corner with no drama, glued to the road and not upset by bumps.

The GT-R’s steering is direct with a very precise feel and great feedback. And with Brembo six-piston front/four-piston rear calipers with cross-drilled 15.35-inch front/15-inch rear two-piece rotors, there was minimal pedal travel before the brakes offered superb bite and precision application. There was intense stopping performance –no drama from 100-mph time and time again, and no fade as we pulled a full G. This is a visceral car – you feel every part of it working at low or high speed. 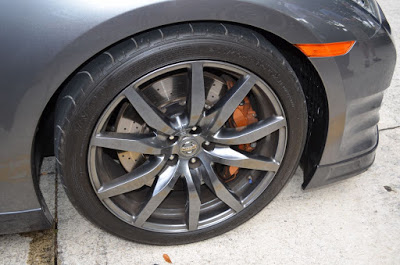 You would think nothing has changed since 2009 at first glance. But like Godzilla of the silver screen, the GT-R has been tweaked. The shape is the same, brutally capable in Gun Metallic paint. Its wide-mouth grille retains its center bumper with upper mesh and wider lower mouth with ducts over a curb-scraping air dam. The slash headlights now carry multi-LED units. The twin flush NACA hood scoops work. The front fenders’ “aero-blades” aid airflow around tires and the body, with an alloy exhaust vent on the chiseled trailing edge. Darker gray lower sill trim accents the pewter metallic 10-spoke alloy wheels with huge cross-drilled vented disc brakes easily visible through them, gold front calipers a dash of color. The P255/40ZRF20 front and 285/35ZRF20 rear Dunlop SP Sport Maxx run-flat nitrogen-filled tires have stiffer sidewalls to reduce deformation under hard cornering. 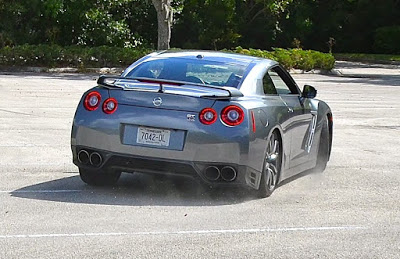 The back looks carved from a titanium ingot with sharp edges and quad taillights that echo the fifth-generation GT-R. There’s a rear carbon fiber underbody diffuser and four huge exhaust tips. Enhanced aerodynamics includes more subtle channels in the front fenders’ lower extremes and vents on the diffuser outboard of the exhaust. The full effect was a car that those in the know noticed – a subtle menacing stance that looks right. 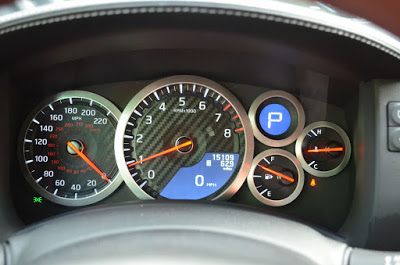 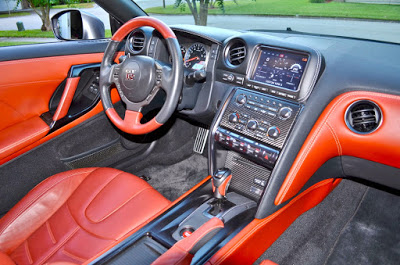 The overall dashboard hasn’t changed from 2009. But 2015 brings us contrasting red leather. The leather bucket seats were very supportive, facing a steering wheel that manually tilts (gauges too) and telescopes with stereo, smartphone and voice command buttons on the left, and cruise control and stopwatch start/stop/mark on the right. The gauge package has a carbon fiber-faced 8,000-rpm central tach dead center with trip computer/odometer/trip meter 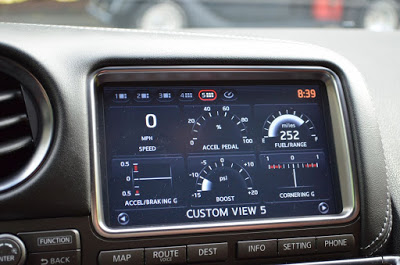 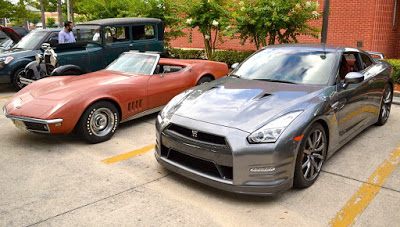 Re-tuned for 2015, the GT-R can be a grumbly pussycat if it’s called on to commute, or a brutal beast that’s always in control when it’s time to play. Godzilla rules, and has a softer side too!

For more information on the GT-R, please visit http://www.nissanusa.com/sportscars/gt-r