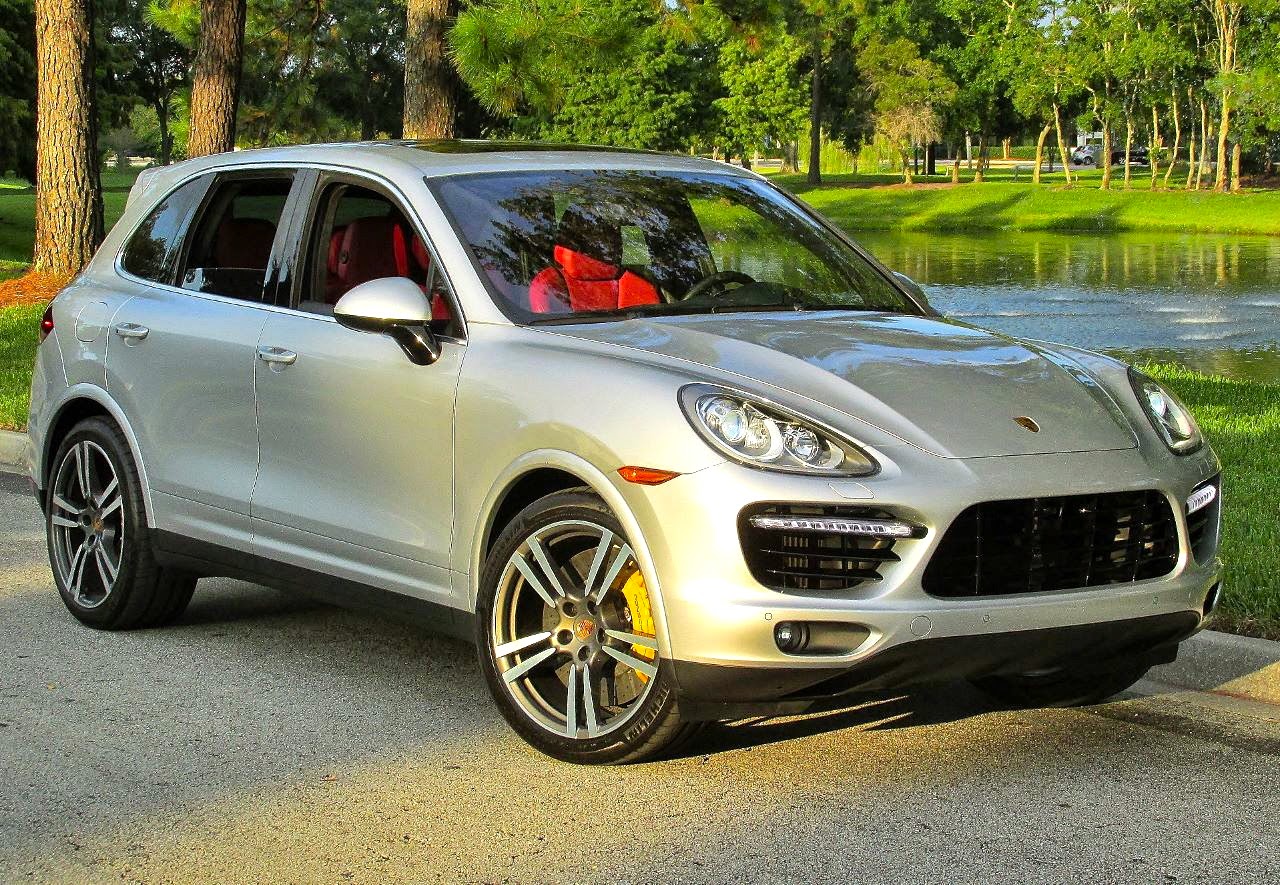 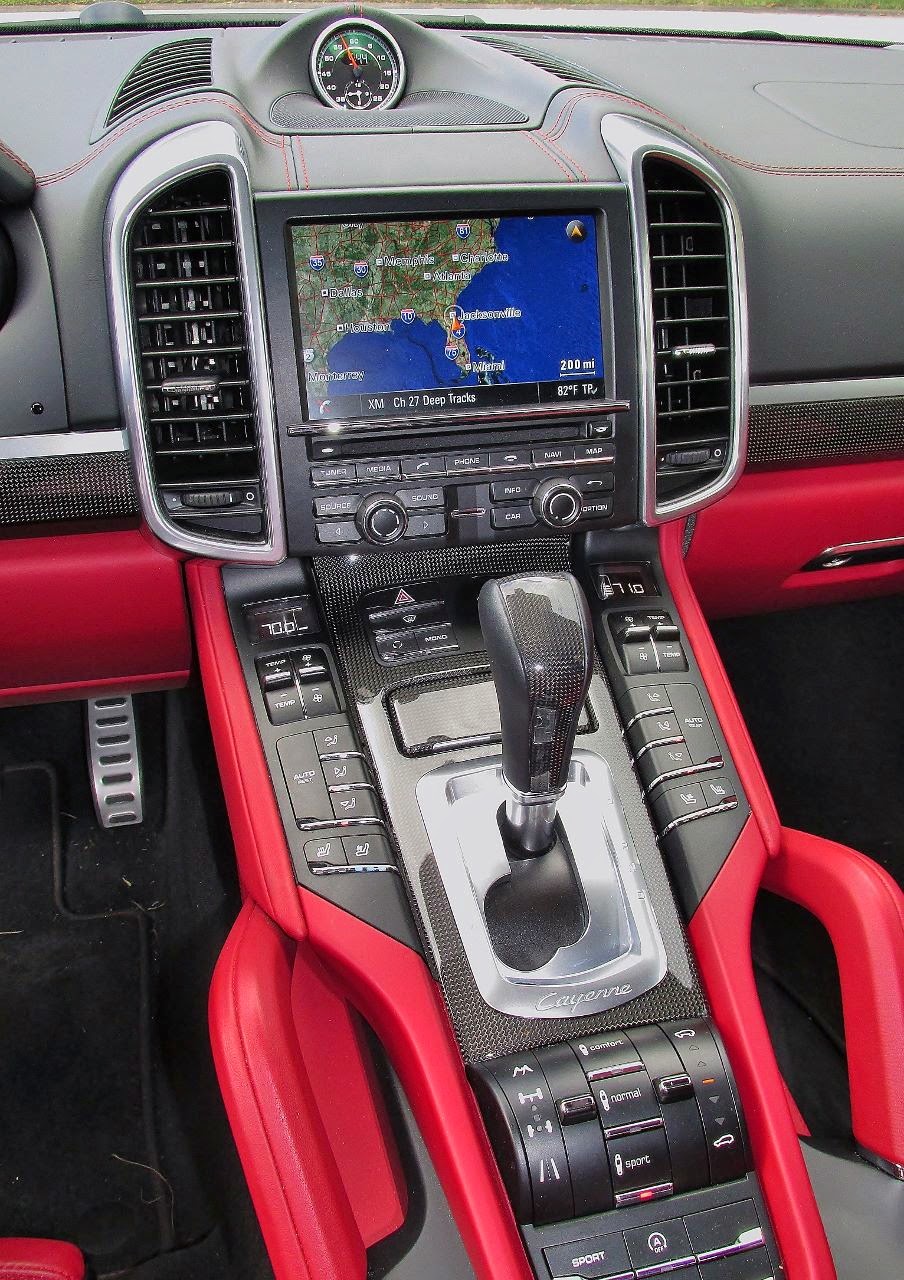 When Porsche entered the luxury sports utility vehicle market in 2002 with the Porsche Cayenne, Porschefiles were horrified that Stuttgart was selling a truck! Well, when a truck has a twin-turbo 550 horsepower V-8 plus sports sedan handling, and 18,507 of the company’s total 42,323 sales in 2013 were Cayennes, the market has spoken. Some say the success of the Cayenne and the four-door Panamera sports sedan (5,421 sold in 2013) translates into profits that can be used to make cars like the 911 Turbo and radical 918 Spyder exotic. Sounds like a good business case to me! 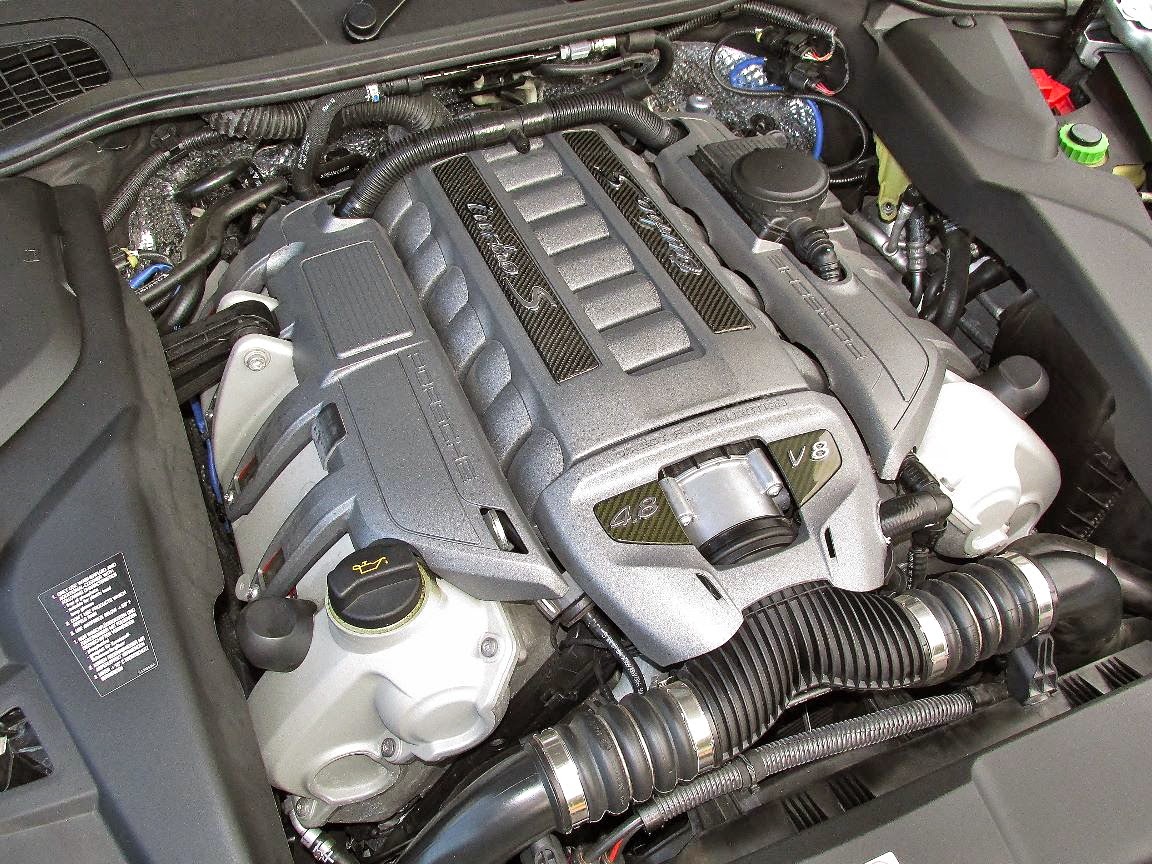 Our 4,784 pound test car roared to 60 mph in 5 seconds and 100-mph in 10.2 seconds – crazy fast for a SUV. Launch was instant, all wheels grabbing, with quad exhaust pipes generating a mellow bellow. Under maximum launch conditions, it’ll sprint to 60-mph in 4.5 seconds, pulling an indicated 1.1 G’s on the g-force meter. That’s faster than a ‘14 Porsche 911 Carrera Cabriolet. The eight-speed Tiptronic S automatic transmission isn’t a dual-clutch PDK like a 911, but shifted cleanly and quickly in “Sport” mode and staying in Fourth we were ready to tap down a gear or two for passing. Used with restraint, our tester average 21 mpg. 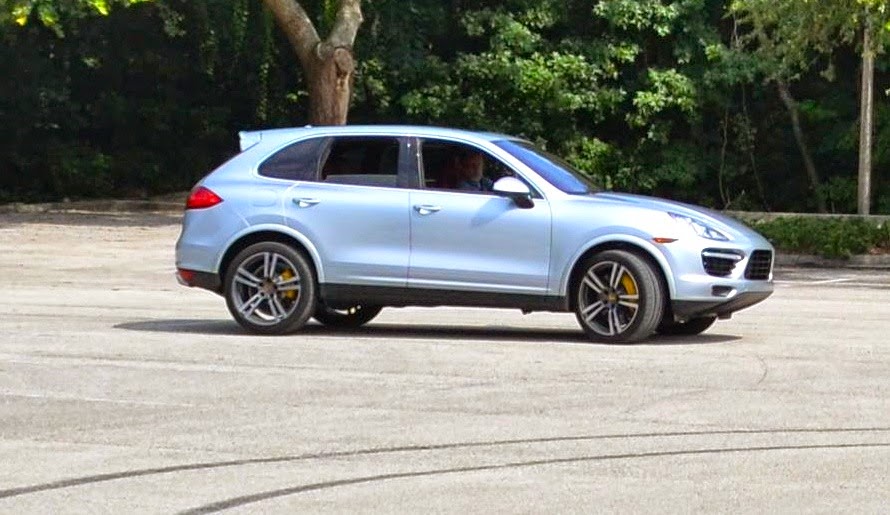 The Turbo S has an active suspension and active all-wheel-drive, plus Dynamic Chassis Control to get rid of body roll in corners. There’s also variable torque distribution to the rear wheels and an electronically controlled rear differential lock. On asphalt, it boasted amazing grip in turns and was really fun to drive. Throw it into a turn and the Cayenne just grabs on and handles the curve with a neutral attitude. Its torque vectoring system brakes the inside rear wheel to also help in a turn.

Its air suspension offers three settings. “Comfort” is perfect for highway touring and off-road. It handled a poorly paved interstate stretch with no harshness. “Normal” is fine around town. “Sport” is what you want when you are hustling two tons of German SUV around – tightly controlled, stiff enough, but it doesn’t beat you up on less-than-perfect roads. The “Sport” suspension setting also hunkers the Cayenne down to 7.2-inches ground clearance. But flip the transmission setting to “Off-Road,” and the Cayenne rises up for 9.5 inches of ground clearance. 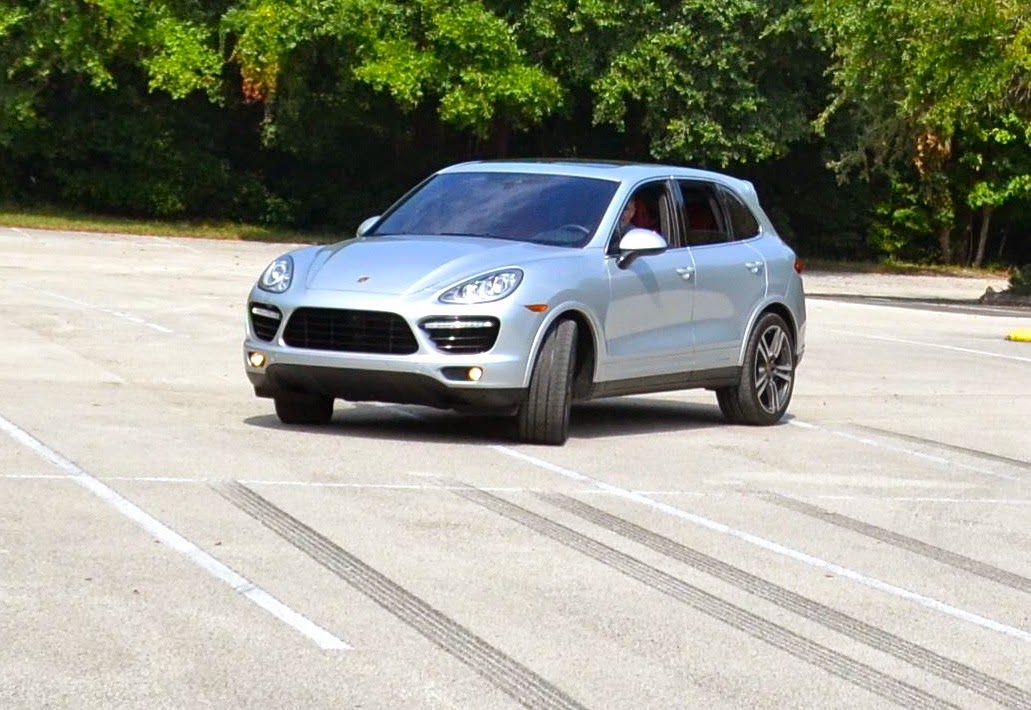 Back on the road, the air-spring suspension’s active anti-roll system means the Cayenne Turbo S doesn’t lean much. It doesn’t look like it’s working hard on the skidpad. It just hung on, a touch of understeer if you really pushed it. In almost any turn at speeds that would make a regular SUV cringe, the two-ton Cayenne tracked like it was glued to the road, hydraulic rotary actuators on the axles counteracting body roll. We stitched turns quickly and smoothly with no drama, the digital g-meter indicating we pulled 1-G on our skid pad. We found the power steering extremely accurate and nicely weighted. The ceramic disc brakes were precise in pedal feel with zero fade even after four hard hits from 60 mph. 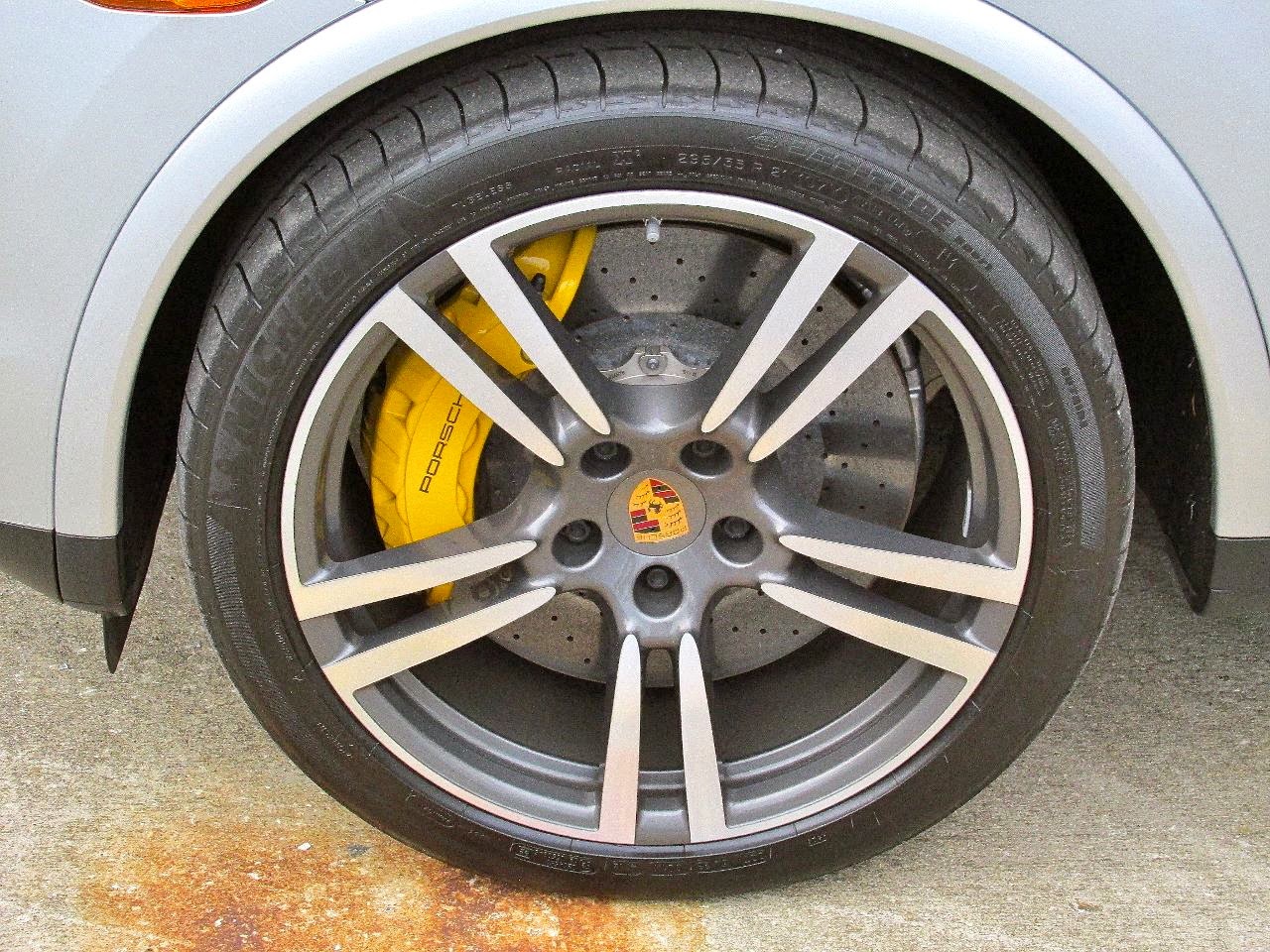 For 2014, Cayenne still lives with a 2011 redesign and wide low crosshatch grille with a long and sharp 911-style nose. Under the grille there’s a black skid plate. Designers have done a decent job of bringing some 911 styling cues into the hood and fender flow. The fenders have gentle flat-edged flares that frame 21-inch 911 Turbo II wheels and wearing fairly low-profile P295/35R21-inch Michelin performance rubber. The roofline is low and ends with a long spoiler over a tinted window, with huge LED taillights and twin dual-outlet exhaust pipes in a black lower fascia with tow hitch. It certainly isn’t as pretty as a 911, but it looks cool when it’s hunkered down in highway suspension mode. It’s too bad the Turbo S ends its run this year. 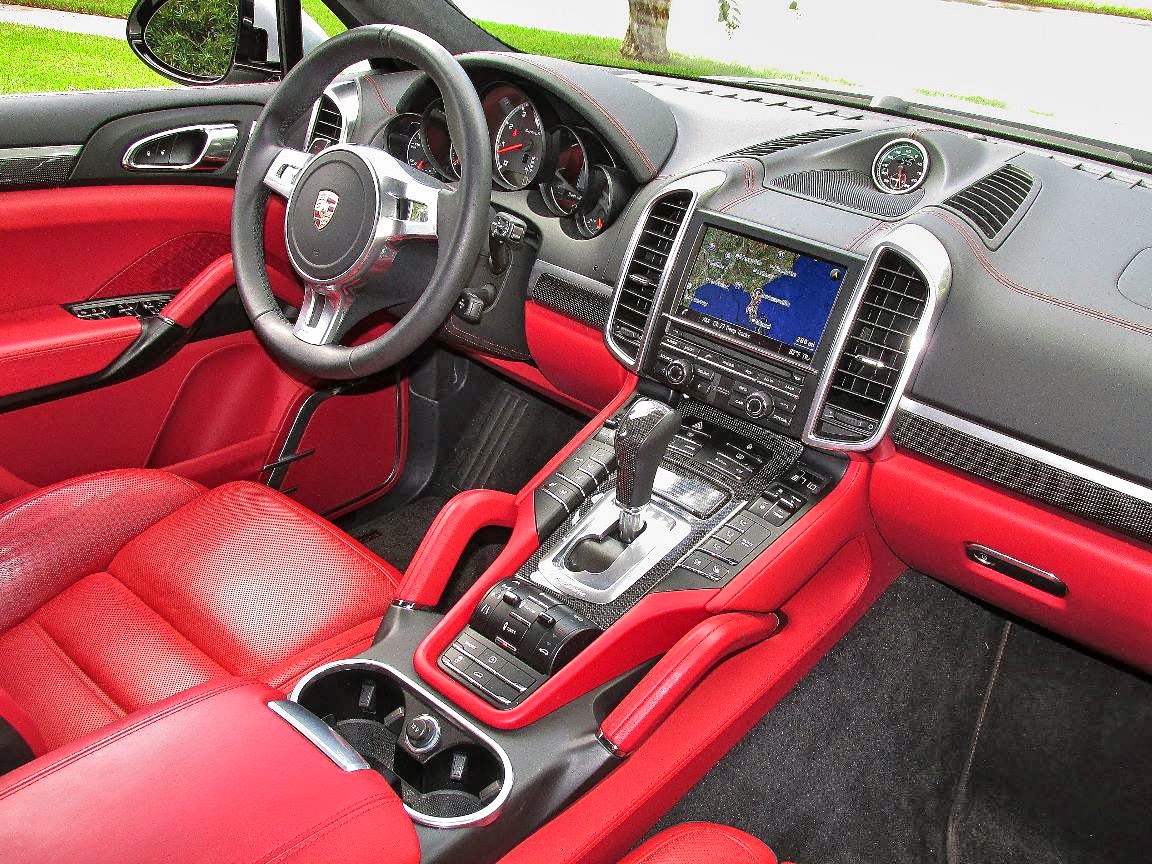 You step over carbon fiber doorsills with illuminated “Cayenne Turbo S” logos, and then slide over the sculpted lower side bolsters and into form-fitting perforated leather bucket seats with 18-way power adjustment plus three memory presets each. They held us in comfortably on the skidpad as well as on a six-hour road trip. We were surrounded by leather with aluminum accents and carbon fiber on the dash, doors and console. 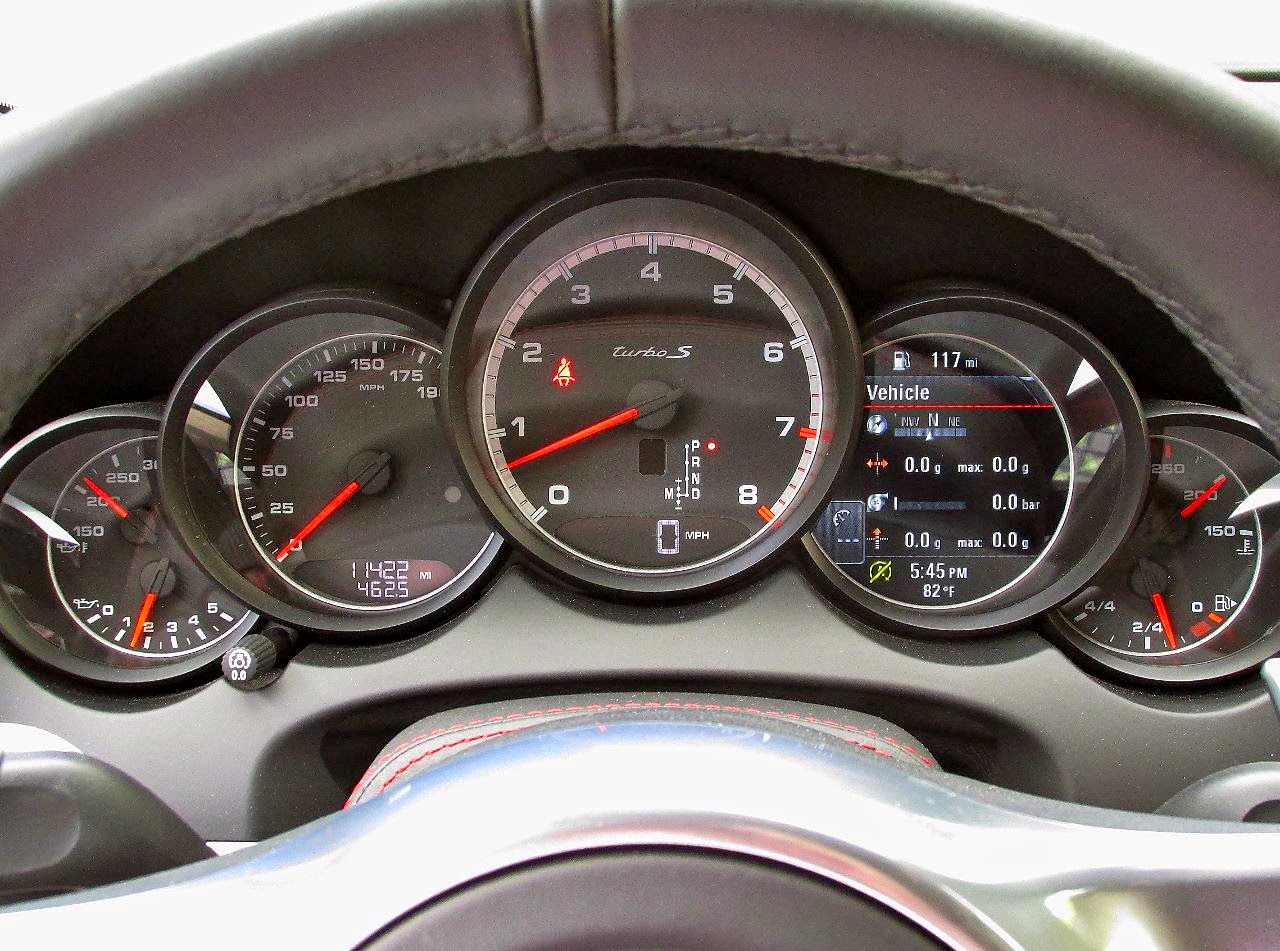 As would be expected, the Cayenne is fitted with a complete gauge package with an 8,000-rpm tach with digital speedometer. An analog 190-mph speedometer is on the left. There’s also a color LCD trip computer screen with navigation, audio, performance info (turbo boost and g-forces), even trip mileage and timing. Framing the gauges is a thick-rimmed black stitched leather steering wheel with big paddle shifters. The dash center hosts a large Porsche Communication Management touchscreen with an AM-FM-CD-SiriusXM Burmester sound system that’s powerful enough to rattle windows.

The main console is packed with 33 buttons to adjust suspension, engine, heated/cooled seats, climate control, four-wheel-drive and height, stability and hill descent control, even a gas-saving engine shut-off at stoplights. It’s slathered in carbon fiber and framed in red leather grab handles. A long moonroof stretches past the rear seat passengers. Underfoot, you’ll find alloy-faced pedals. The Sport Chrono Package includes a stopwatch and stores performance data, including lap times or transverse and longitudinal acceleration values and displays it all on the PCM main screen. 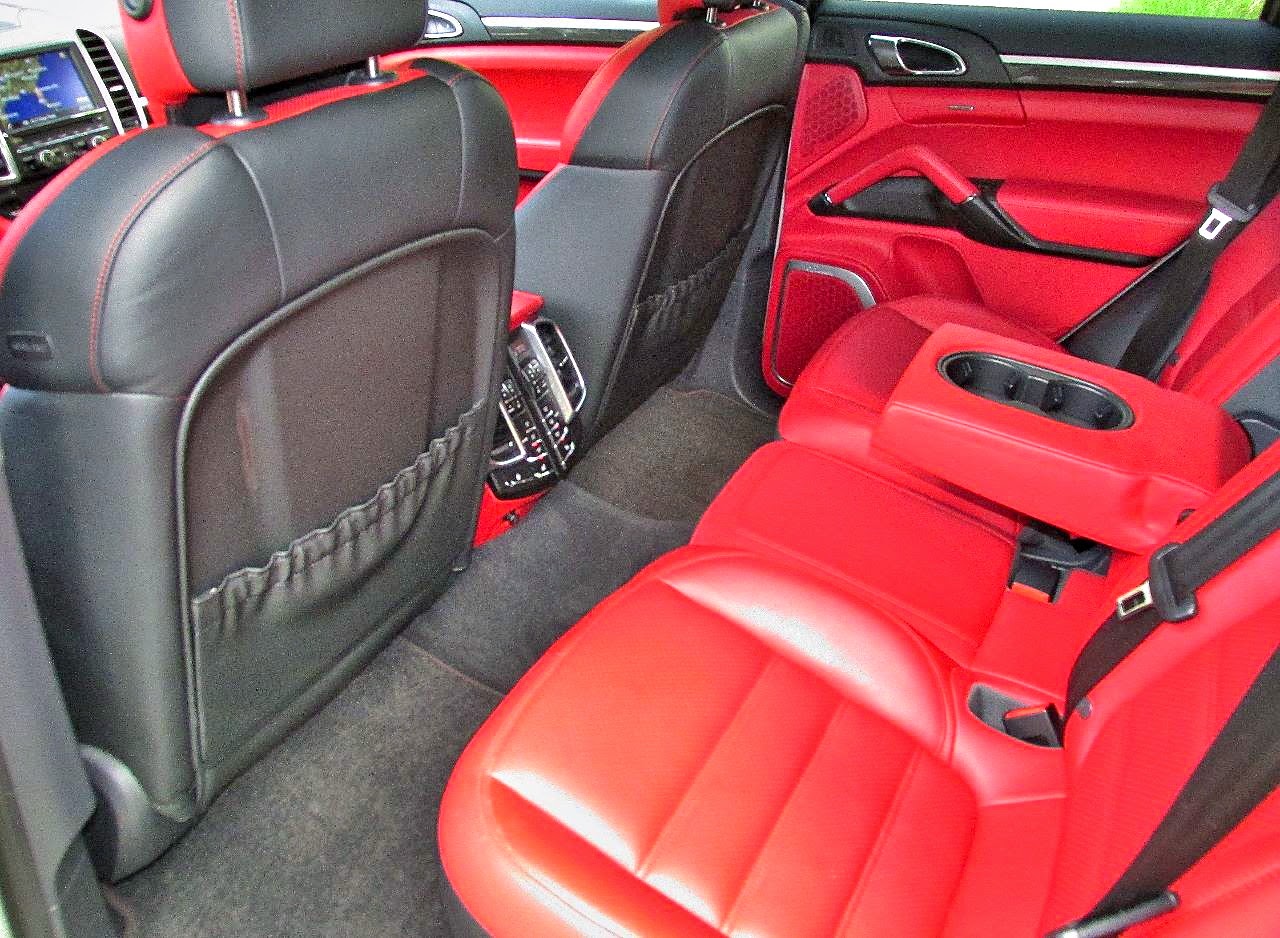 Back seat room is generous, with a rear climate control system and outboard heated seas. Under the power tailgate, which doesn’t open high enough to clear my head, there’s decent storage space with a divider that slides on alloy strips. The rear seats split 40/20/40; the raked rear window intrudes on some box cargo capacity. 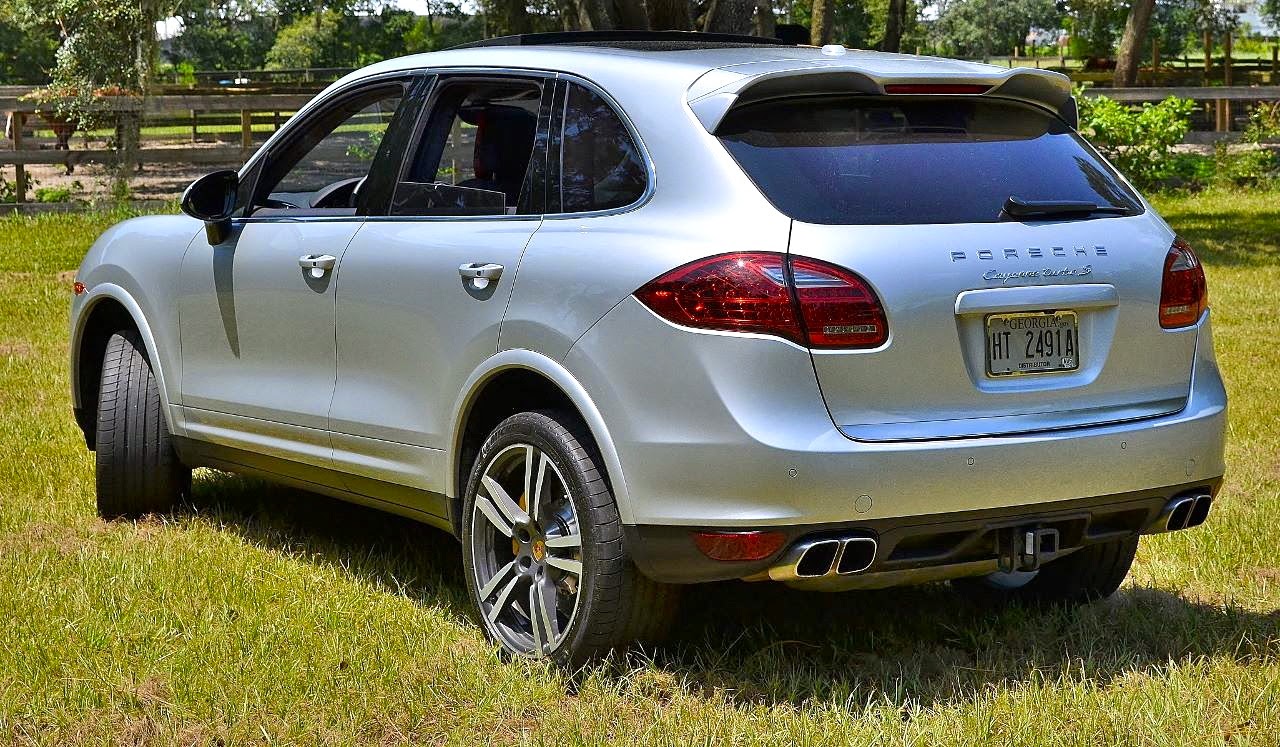 Our test 2014 Turbo S has a base MSRP of $146,000 and with all options tallied up, hit approximately $161,000. It’s the do-everything, go-anywhere Porsche that showcases the best of what Porsche is known for. I want it!