Skip to content
Hollywood Hot Rods turns a Mustang convertible into a drop-top Supercar, with styling to match for the SEMA Show. 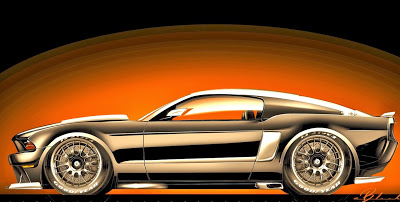 Unlike typical custom Mustang variants, this one showcases hand-formed aluminum bodywork including a lift-off roof. Hollywood Hot Rods is challenging Supercars with its ‘14 Ford Mustang GT convertible. While the classic style and proportions of Mustang say performance even in stock form, the team at Hollywood Hot Rods wanted to create something truly unique with this project car for SEMA Show 2013.

“We really wanted to take the customization of this Mustang to the next level,” said Troy Ladd, owner of Hollywood Hot Rods. “Instead of simply adding accessories and a custom paint job, we wanted to really change the car. So we decided to redesign some key elements of the car, like the roof and rear section, creating a completely new and bold design that propels this Mustang into Supercar status while retaining classic Mustang DNA.”

More than 150 hours went into reshaping the entire rear section of the Mustang in metal. Another 250 hours of hand forming went into crafting the aluminum lift-off roof. All body modifications including the front splitter, side scoops, skirts and diffuser have been
custom fabricated in aluminum.

As far as performance is concerned, this Mustang sports a Ford Racing Whipple supercharger and Banks Power water-methanol injection system, bringing the 5.0-liter V8 to an estimated 750 horsepower. Underneath, a Cortex Racing X-treme grip track suspension system keeps the tires planted so all that power can be put to use. Other goodies include Watts linkage and torque arm mods, JRI coil-over dampers all around and StopTech six-piston disc brakes.