Skip to content
‘Jaguar was once known for brilliant two-seat roadsters like the epic E-Type. They are again thanks to the F-TYPE S, a leaper for all seasons,’ blogs Dan Scanlan. 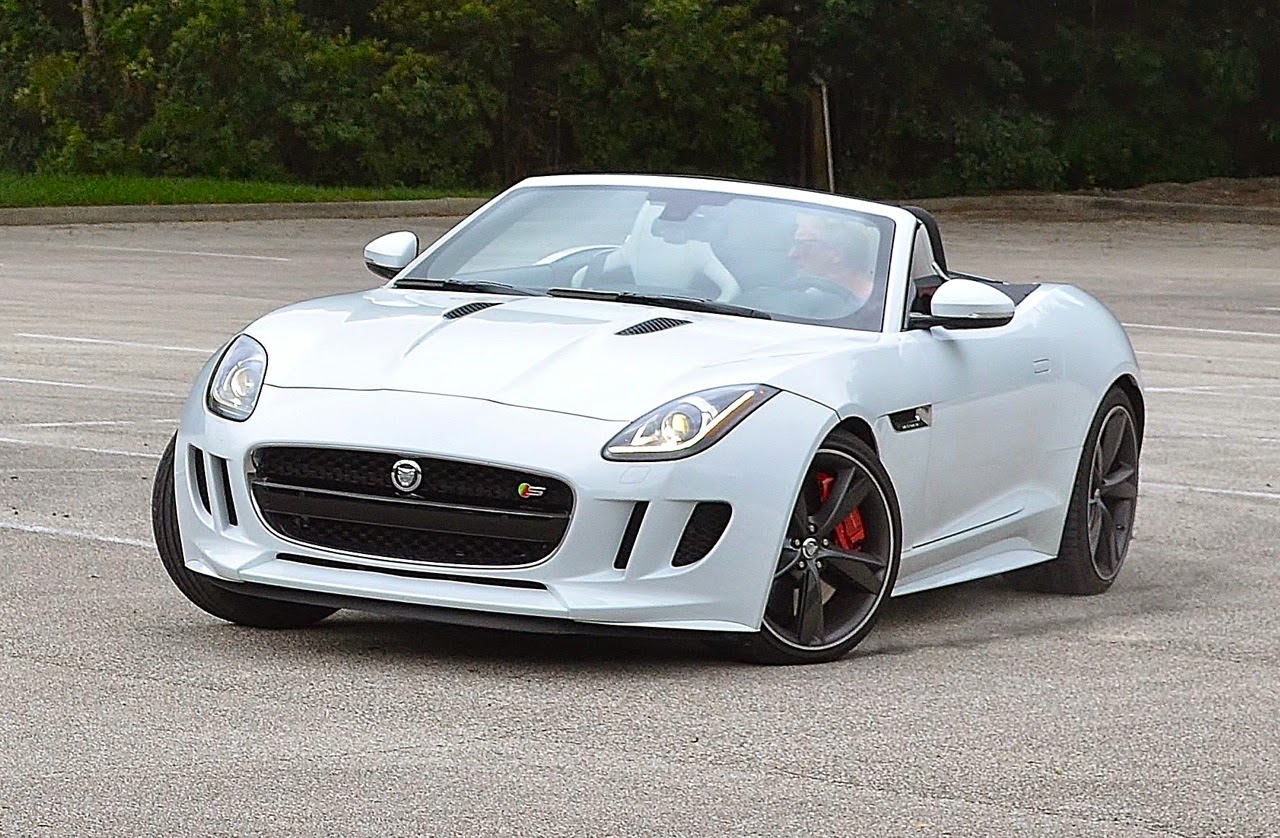 Called one of the 100 most beautiful cars in the world, the E-Type’s grace was matched by the pace of its 3.8-liter inline six with 265 horsepower. Later it received a V-12. But when the last version of the bullet-shaped roadster once called “the greatest crumpet-catcher known to man” was laid to rest in 1975 that was the last great Jaguar sports cars.

The new F-TYPE comes in supercharged 3-liter V-6 versions with 340 or 380 horsepower, and the 495 horsepower 5-liter supercharged V-8. Ours was the middle model, aimed right at the 350-horsepower Porsche 911 Cabriolet.  Our 2,700-mile-old roadster emitted a rising snarl as it accelerated toward 60-mph in 4.3 seconds in full Dynamic transmission setting to make shifts more aggressive with higher shift points. Launch control is simplicity – left-foot brake while nailing the throttle, and when the trip computer screen flashes “Dynamic Launch,” releases brakes and go! That gave us a bit of controlled wheelspin at launch to 60 mph in 4 seconds as we paddle-shifted at 6,000 rpm, and 100-mph in 12 seconds. In “Sport,” the throttle is blipped automatically to match engine revs for very rapid downshifts. In a curve, the transmission holds it so we were in the right gear for the exit. 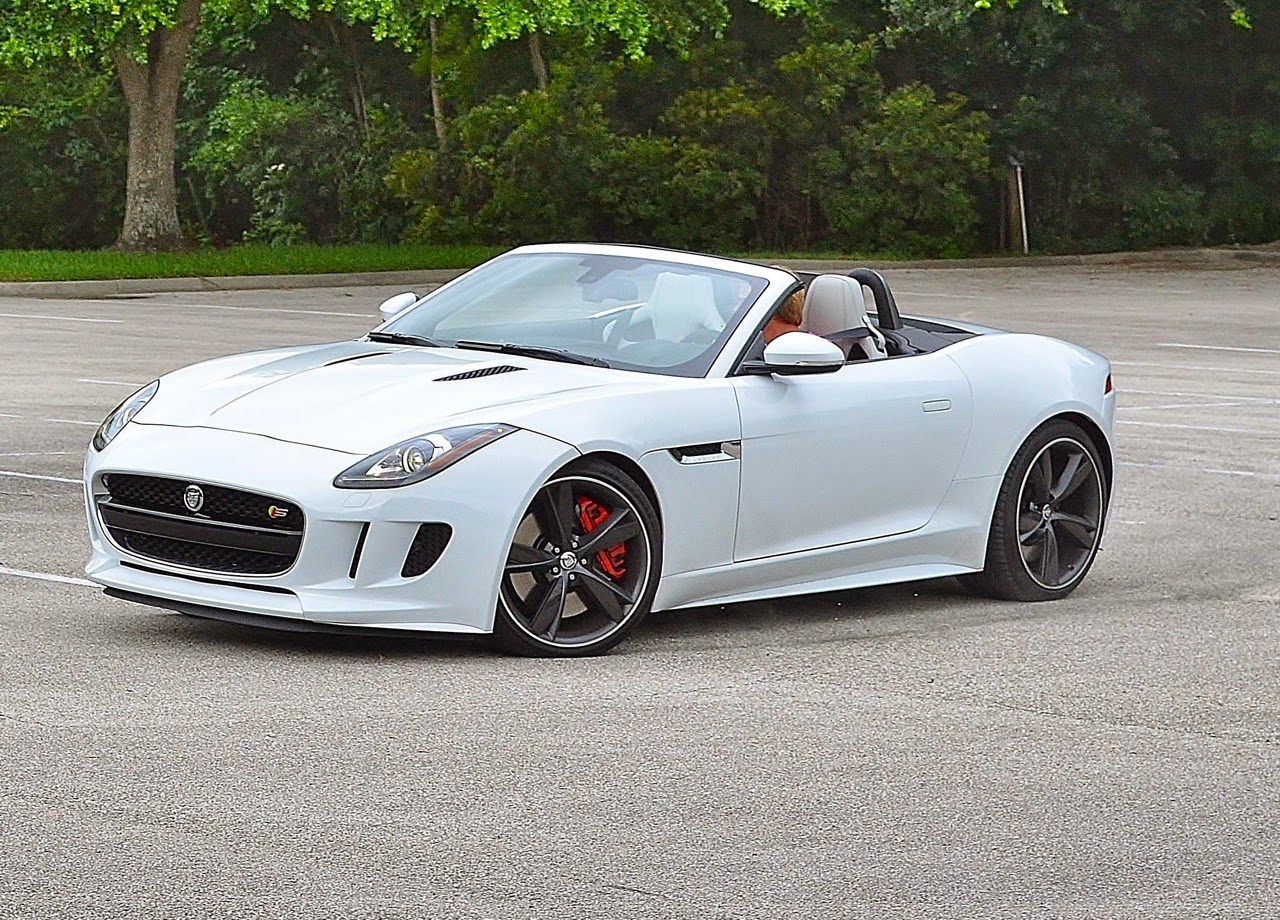 As far as not having a twin-clutch gearbox like the Porsche’s PDK, we didn’t mind. Paddle shift the next gear in “Sport,” and it was clean and quick with an exhaust “whoomp!” as the throttle backed off a bit for the next gear, followed by a pop-pop exhaust overrun. This may be the most addictive and feral exhaust note this side of a Ferrari, aided by Active Exhaust that opens bypass valves in the rear of the exhaust under hard acceleration. 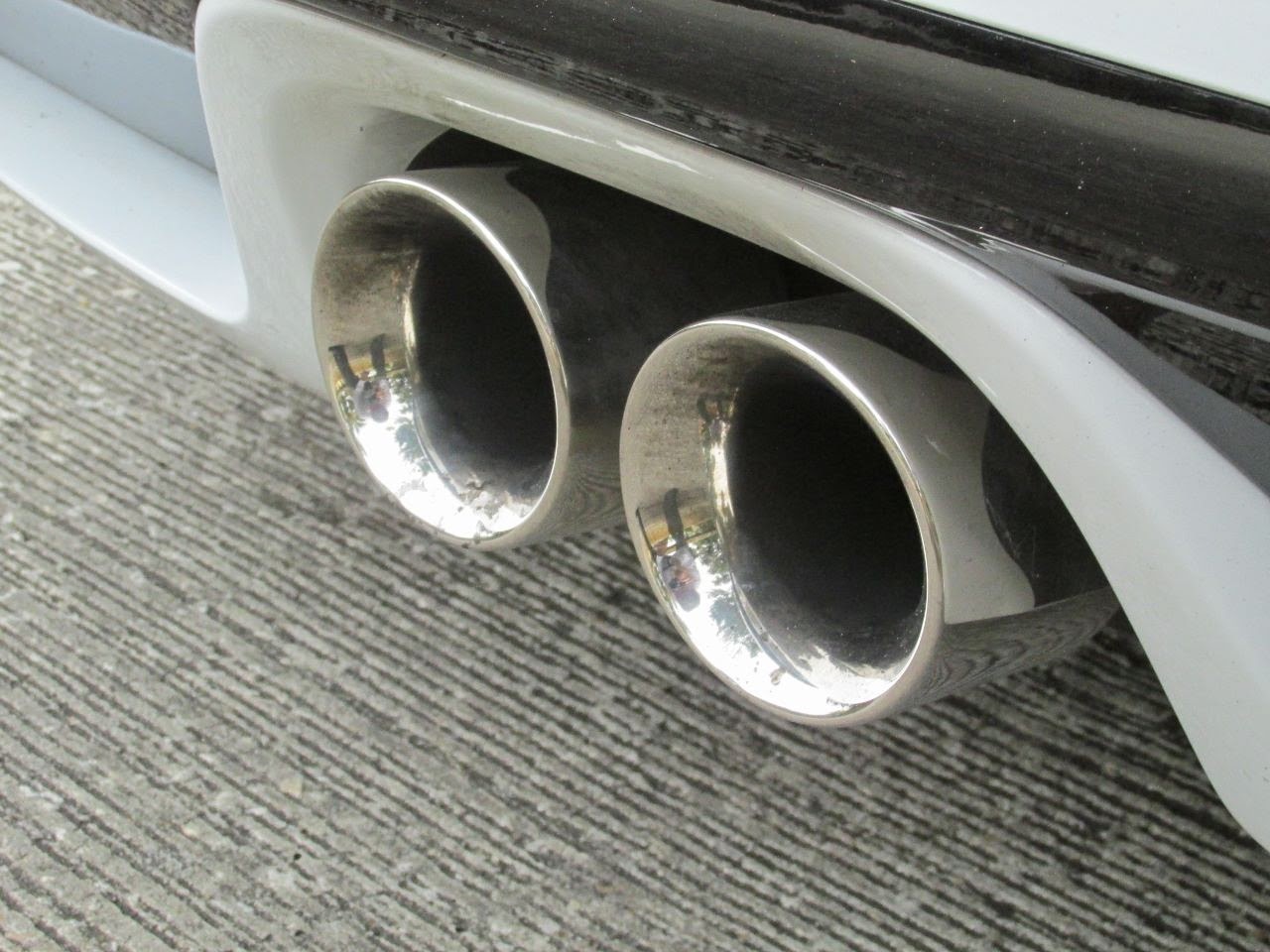 I shut it down in my neighborhood since it was a bit much. Fuel mileage calculated out to 15 mpg after filling up on premium. The engine’s Stop/Start system did turn off the V-6 at stoplights and fire it back up the second I lifted off the brake pedal.

There’s a forged aluminum double wishbone suspension up front and multilink in back with a sports suspension system and adaptive damping that assesses body motion, roll and pitch rates 100 times per second and adjusts accordingly. The Dynamic option, a first for a Jaguar, lets the driver select the firmest steering feel weight and suspension as well as the sharpest throttle response. The result was a firm suspension in normal, and a really firm setup in Dynamic. We felt every pavement break, but it wasn’t brutal, even at full firm. The well-designed convertible body offered no squeaks/flexing other than some driver’s seat leather creaking. 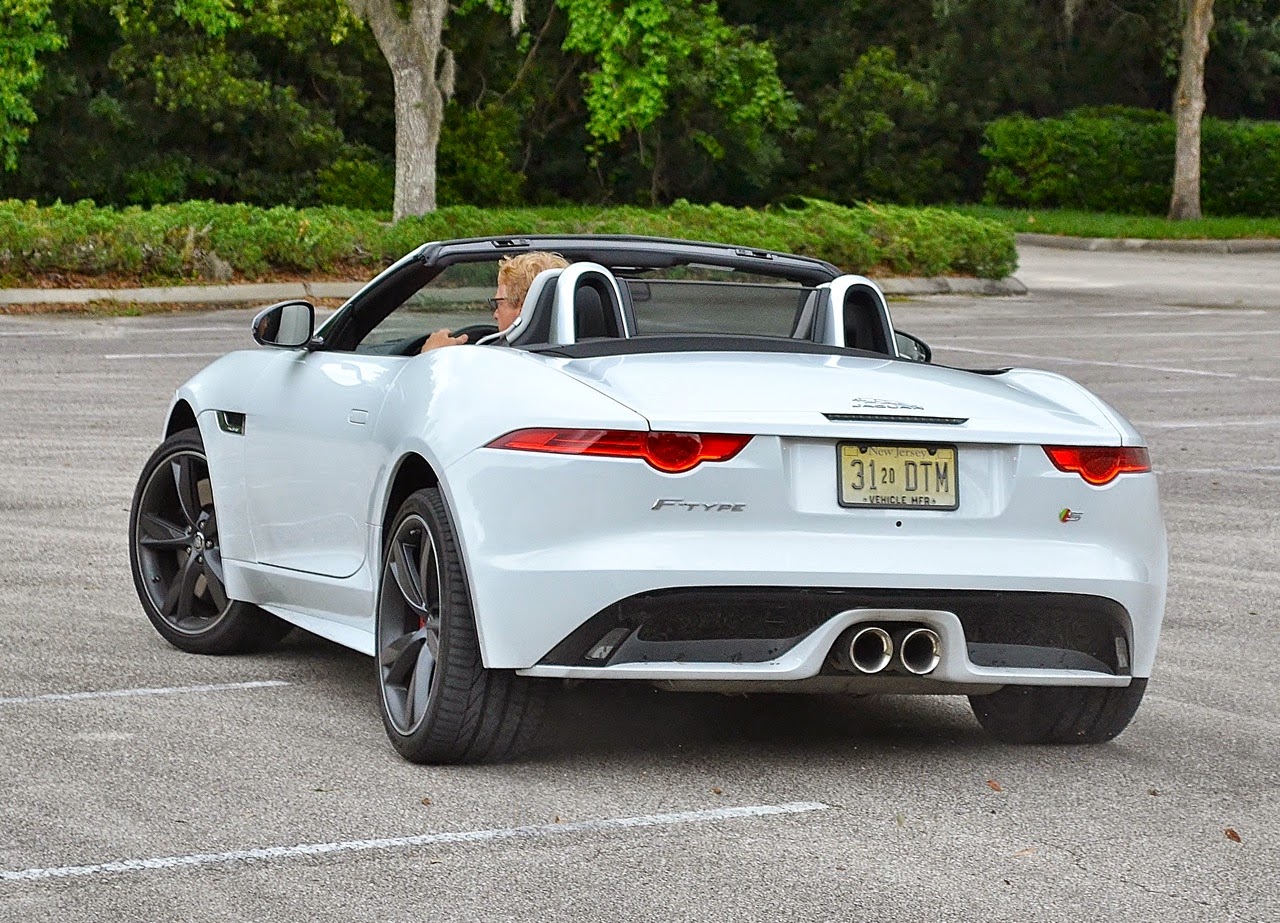 The payoff was in any turn. Coupled with the sticky Pirellis, the F-TYPE just carved its way through with a precise steering feel. Power out of a turn and the rear Pirellis stayed planted with no traction control. Push harder into a turn and there was some understeer, but a bit of precise throttle could even it out. The Jag stayed admirably flat in curves as well, a lot of fun to toss around. Large 15-inch front/12.8-inch rear discs with big red-painted calipers had a great initial bite and precise pedal feel as well as no fade after hard repeated use – great dancing shoes for this baby Jag to step out with. 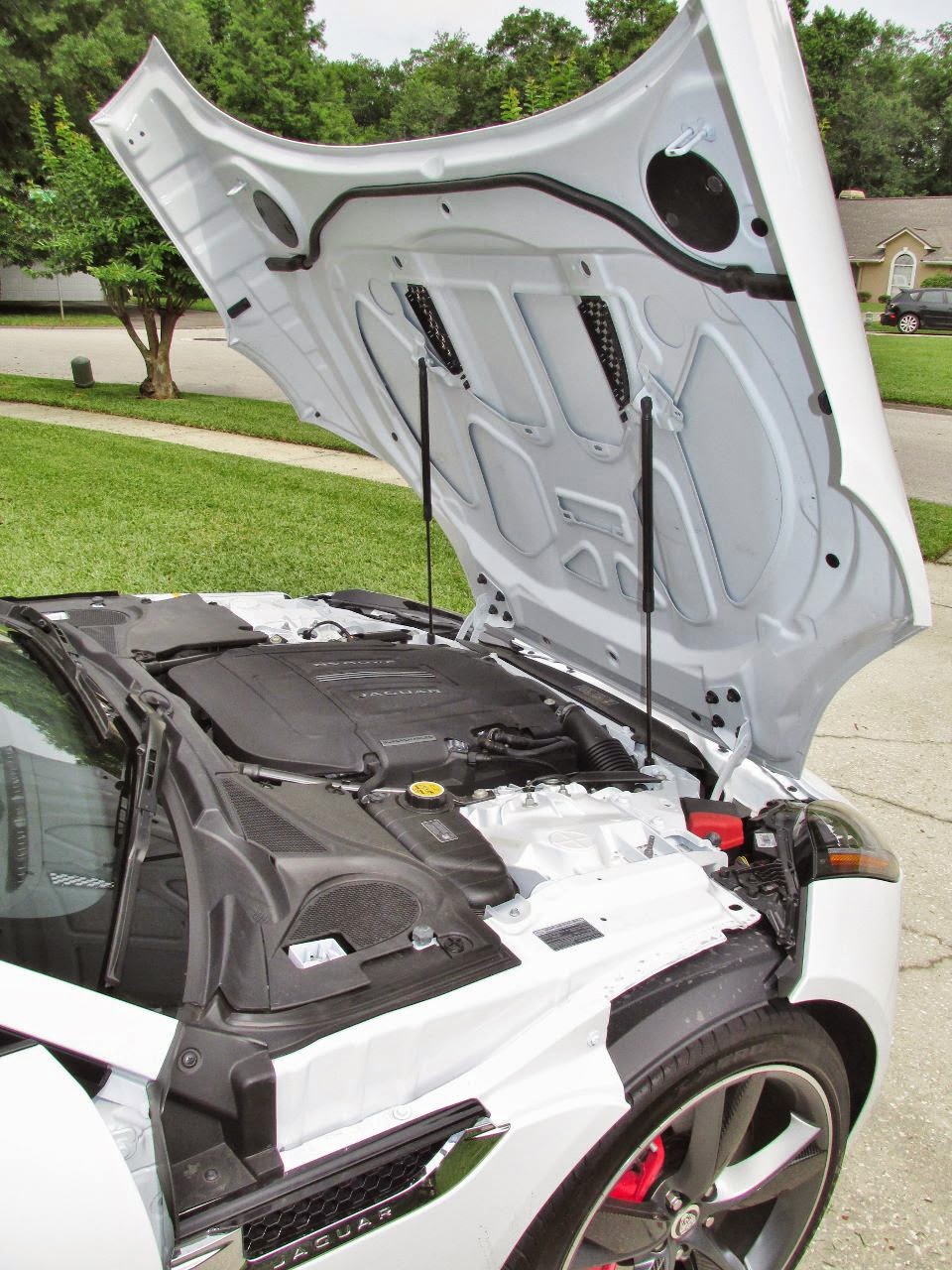 Not just another pretty face! Here is a snarling cat’s face on its grille and a leaping cat on its streamlined tail, with lightweight aluminum body above and architecture underneath. And while the face may have a bit of current XJ sedan, there are some E-Type cues.

The wide mouth grille with gloss black bumper dead center hints at the chrome bar on the E-Type snout. Slim tapered headlights also echo the classic, but with white LED accents down each side. Underneath, twin vertical vents, then a slim lower center air intake over an air dam with small side winglets. A classic slim power dome runs up the bonnet’s centerline, a true clamshell with vents that reveal “SUPERCHARGED” legend on the engine cover. 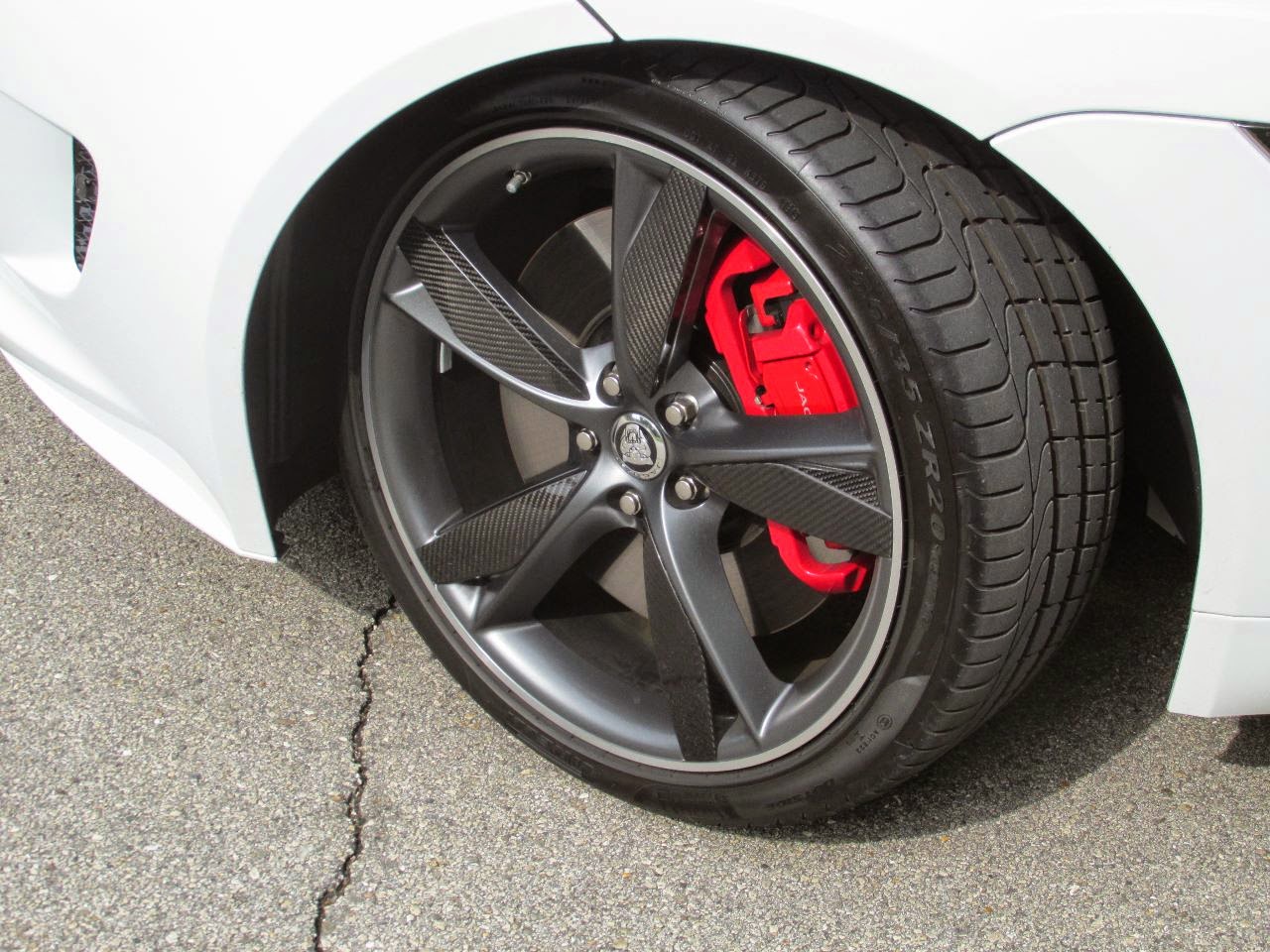 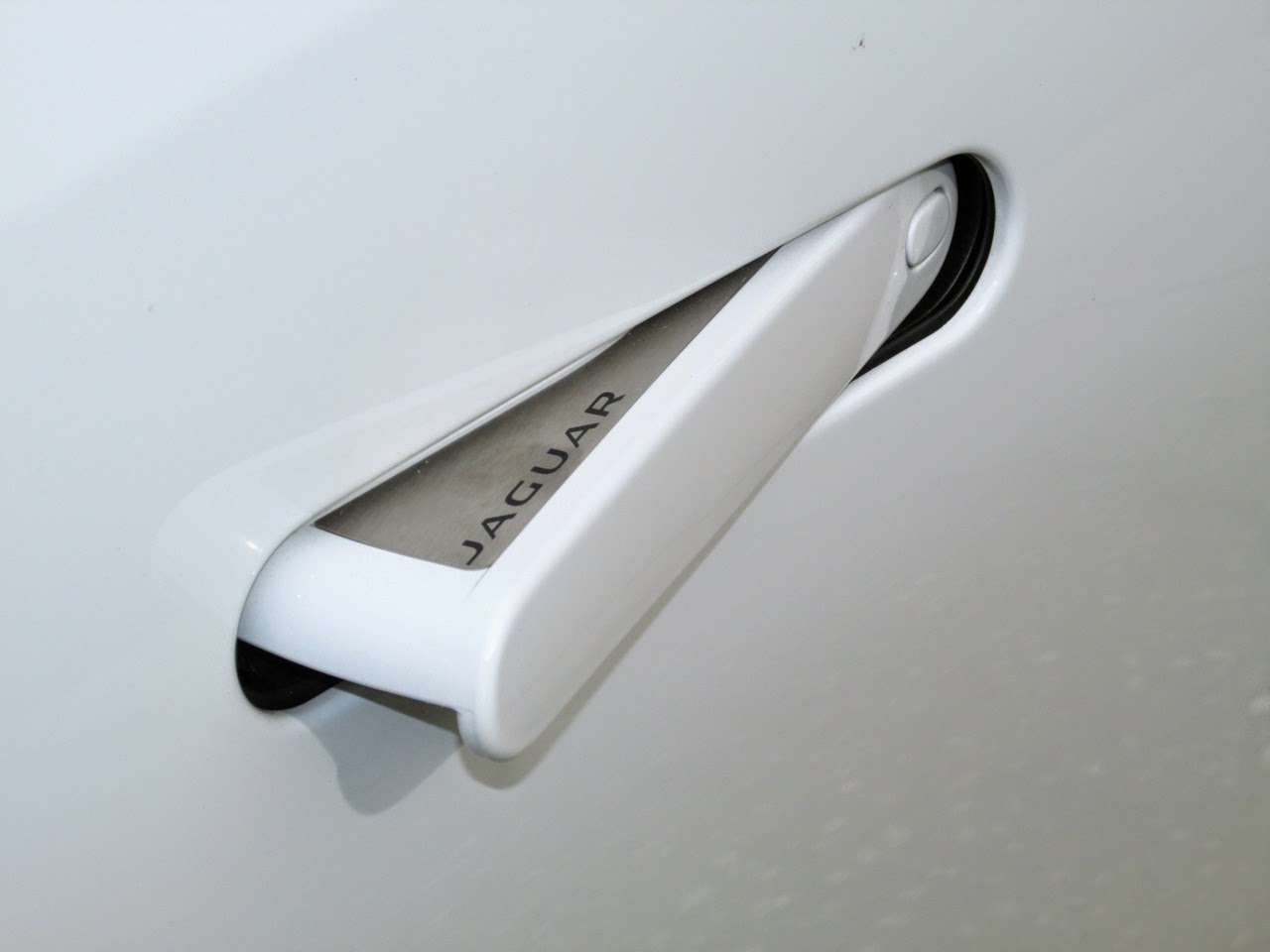 The F-Type’s door handles are flush. But tap the button and they fold out as side mirrors unfurl. Tap the rubberized copper Start/Stop button with a heartbeat pulsing red light inside and the engine barks to life. The heavily bolstered high-back bucket seats done in soft dove gray leather proved to be very comfortable and supportive with lots of door-mounted buttons for the 14-way power adjustments. 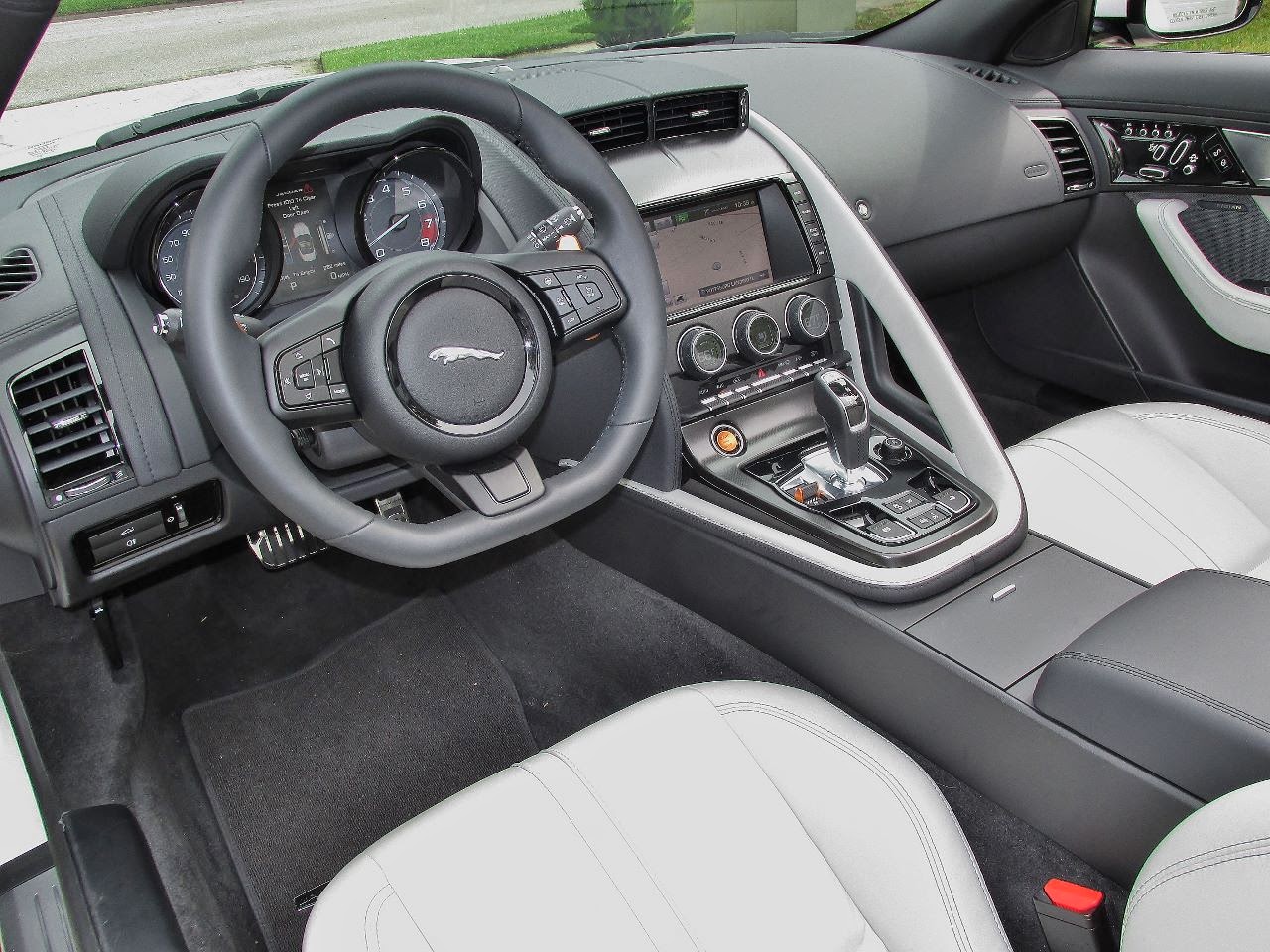 Contrasting stitched gray leather lines a J-shaped accent that runs from top of the dash to console base. A white-on-black 180-mph speedometer and 8,000-rpm tach, the latter with a 6,800-rpm redline, face the driver. In between, a color LCD screen with gas and temperature gauge, trip computer, radio, time, outside temperature and digital speedometer as well as gearshift position. A thick leather-clad flat-bottom steering wheel with power tilt and
telescope had the usual buttons for stereo, telephone, cruise and trip computer – but oddly
no voice command for stereo and navigation. Polished alloy pedals live in the foot well,
where I would have loved another inch of legroom. 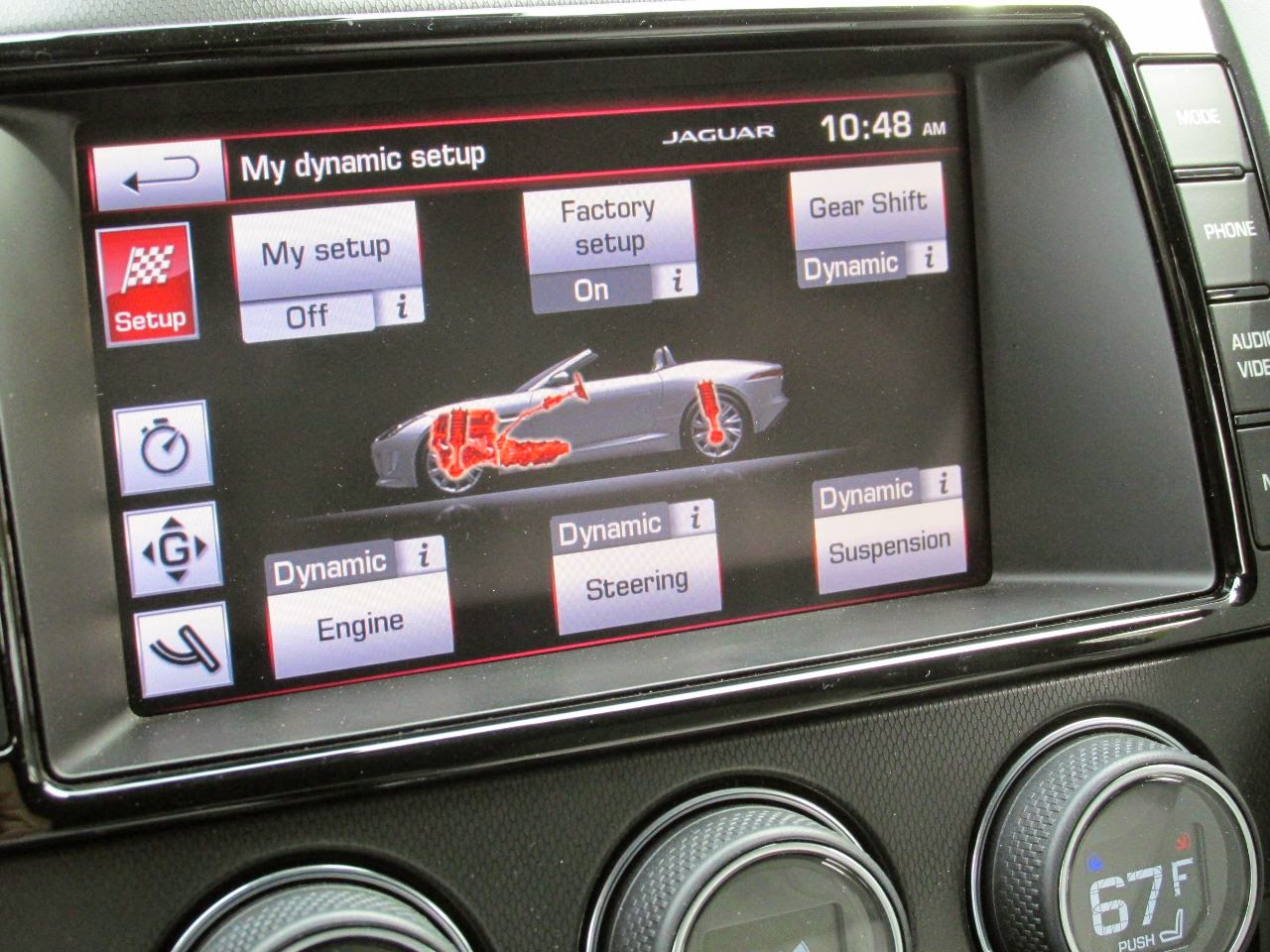 The central LCD touchscreen has navigation, stereo/video player, phone, parking sensors and backup camera with cross-traffic detection, and phone. That screen also hosts the Configurable Dynamics program that allows the driver to set shift mode, engine and throttle response, steering feel and suspension to normal or dynamic. The screen offers a lap timer, throttle/brake performance and a g-force meter.

Don’t look for a manual gearbox – that’s a BMW-style electronic toggle with eight forward speeds, reverse, and sport setting. There’s a button for active exhaust, an “ECO” switch to engage engine start/stop for gas savings, and another to pop up the spoiler. 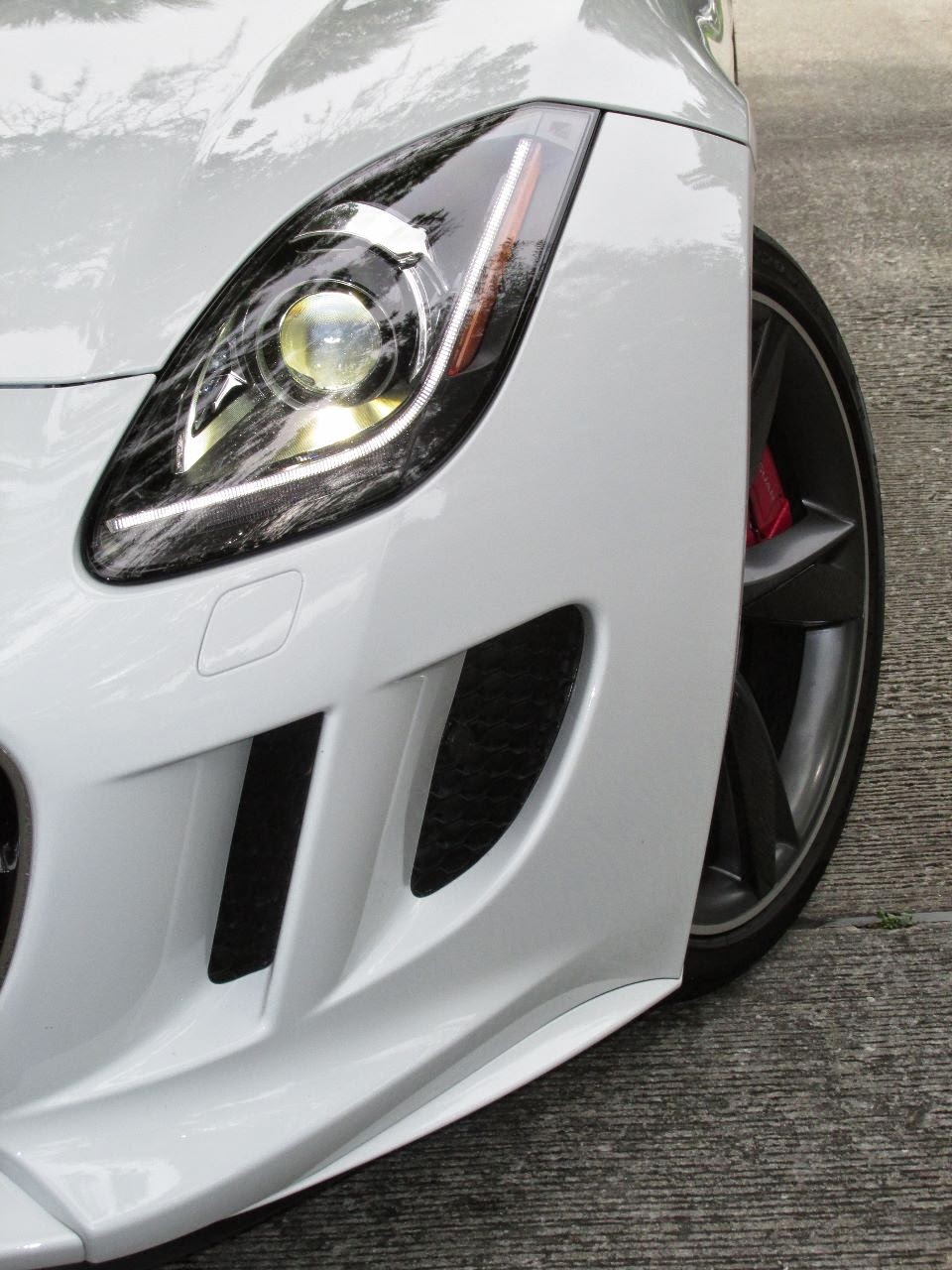 Unfortunately we picked up a couple of electrical gremlins – the navigation screen refused to light up twice and the driver’s window would close, and then open. The power top folds flat in 12 seconds up to 30-mph and is beautifully finished inside. We found the seating position with door tops at shoulder height a bit low. But thanks to the laid-back windshield and mesh wind-blocker clipped between the rear roll bars, lots of typical wind noise at 70-mph was blocked out. 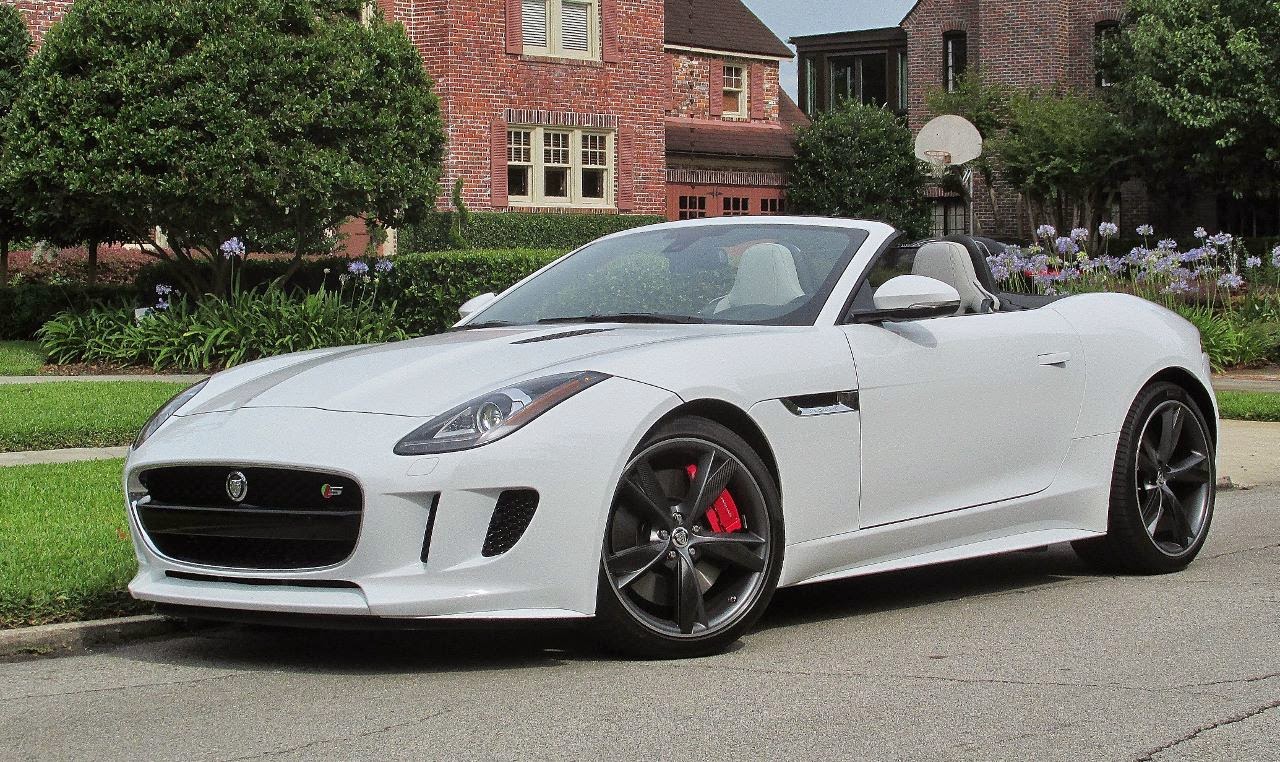 This cat has the looks, sound, power and handling to be a player in its exclusive field. If the Porsche is a better dancer, the Jag is the better-looking partner!

For more information about the latest luxury-performance vehicles from Jaguar, please visit http://www.jaguarusa.com/all-models/all-models/index.html