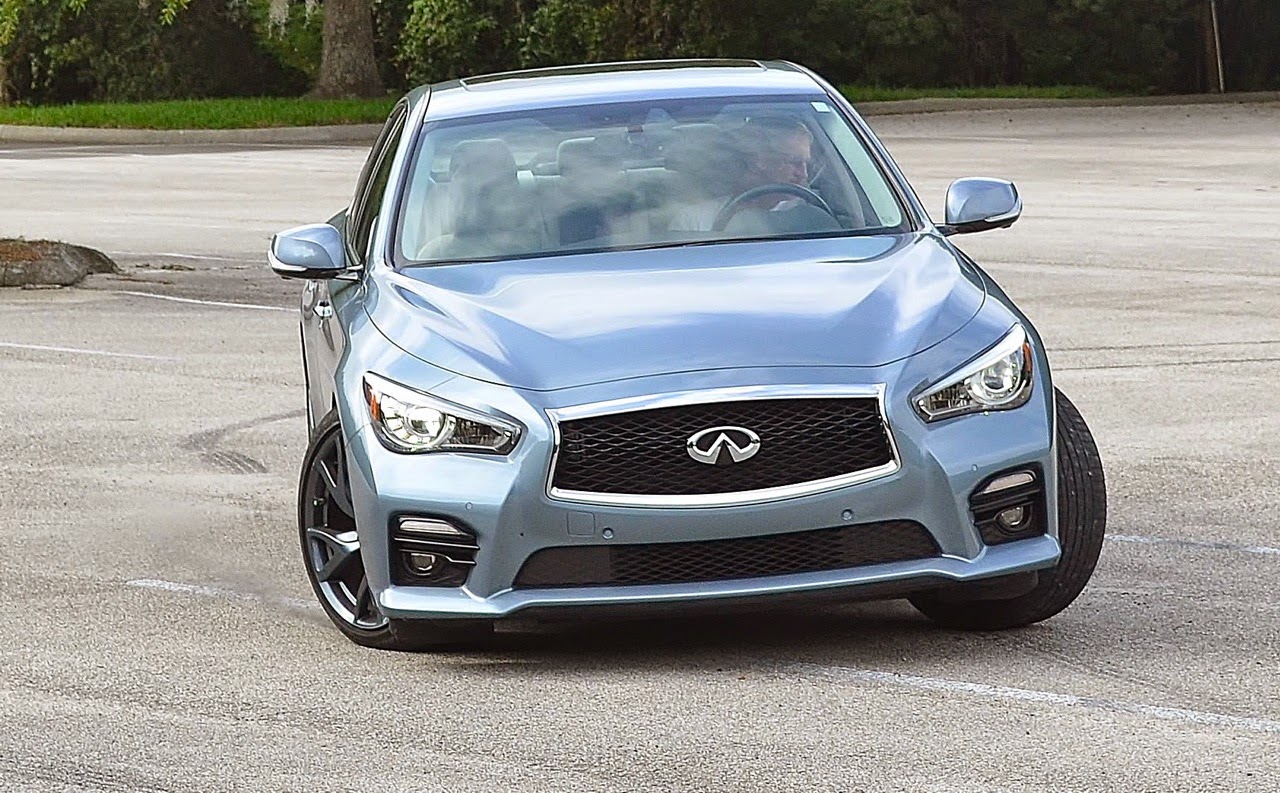 Infiniti, born of Nissan 24 years ago, made a decision in 2014 to change model designations and name Formula One driver Sebastian Vettel the brand’s Director of Performance. Infiniti had always produced performance-oriented luxury cars; now they would get a more dramatic evolution of their designs along with tweaked engines, suspension and body kits. The result was the fifth generation of the compact G sedan, now called the Q50. And for us, it was the Q50S, with body and suspension mods on top of some serious high-tech driving aids. 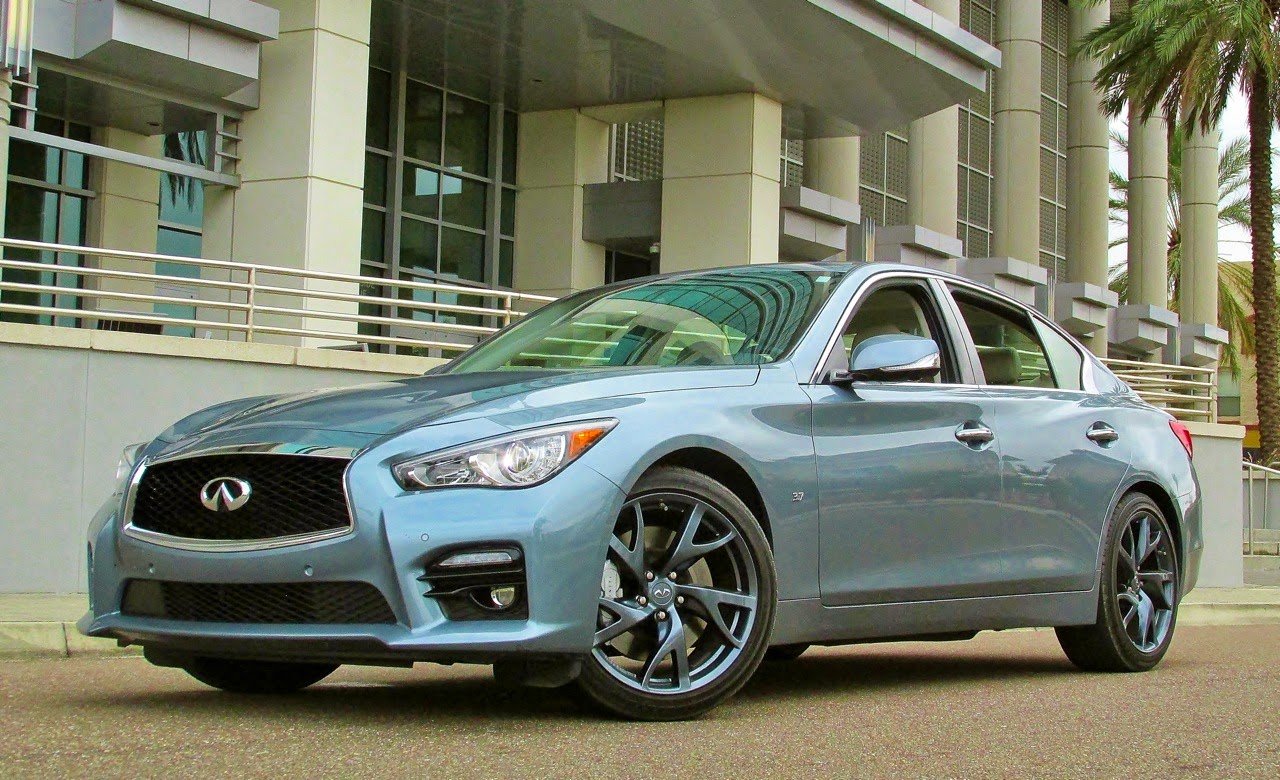 The Q50S is a very quick sedan, launching with just a touch of rear wheelspin to hit 60 mph in 5.4 seconds and 100 mph in 12.8 seconds. Passing power is more than adequate and the engine offers muted snarls, blipped in paddle shift or “Sport” mode downshifts. Fuel mileage on premium was about 23 mpg.

Infiniti’s Q50S lives on the current FM (front mid-engine) platform shared with the 370Z. It starts with a four-wheel independent suspension, a single pivot double-wishbone in front and a multi-link design with coil springs and shock absorbers with increased camber stiffness, stabilizer bars and a bit stiffer feel on the S. The S also ditches the base Q50’s 17-inch wheels for the 19-inchers with the P245/40R19 run-flat summer tires. 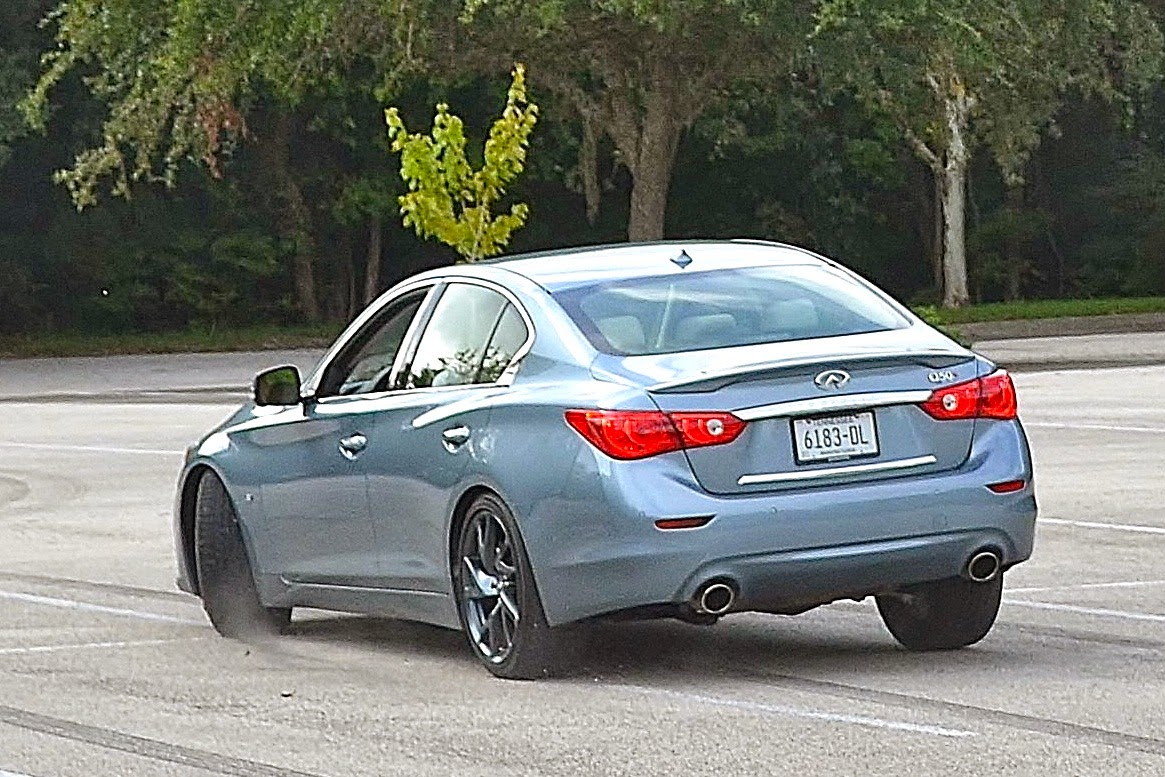 While the Sport settings can be customized to heighten throttle and steering response, they do nothing for the suspension and that’s just fine. The Q50S has a firm but fluid suspension that handles bumps quickly and with buffered rebound. It has a nice balanced feel as it tackles daily driving and flows into turns with confidence. You can control the tail via throttle, the rears caught quickly by traction control. It can be a bit tail-happy if you are too enthusiastic. Yet it feels a bit detached when pushed harder.

One of the like/didn’t likes was Direct Adaptive Steering, which allowed me to tune steering feel from light to standard or heavy, with casual, standard or quick response. Set at heavy/quick, the steering feel was far too firm and artificial, really loading up in turns. Set to light/casual, it was too wimpy. My favorite was standard/quick, which was just fine most times but still loaded up too artificially in turns.

The S did have sport brakes with upgraded rotors, four-piston front calipers and two-piston rear. They stop the car straight and quick with no fade or nosedive and great pedal feel. Don’t get me wrong – the Infiniti had great poise and grip in turns. It just didn’t feel like it was having as much fun as it could be, since the electronics were playing it safe. 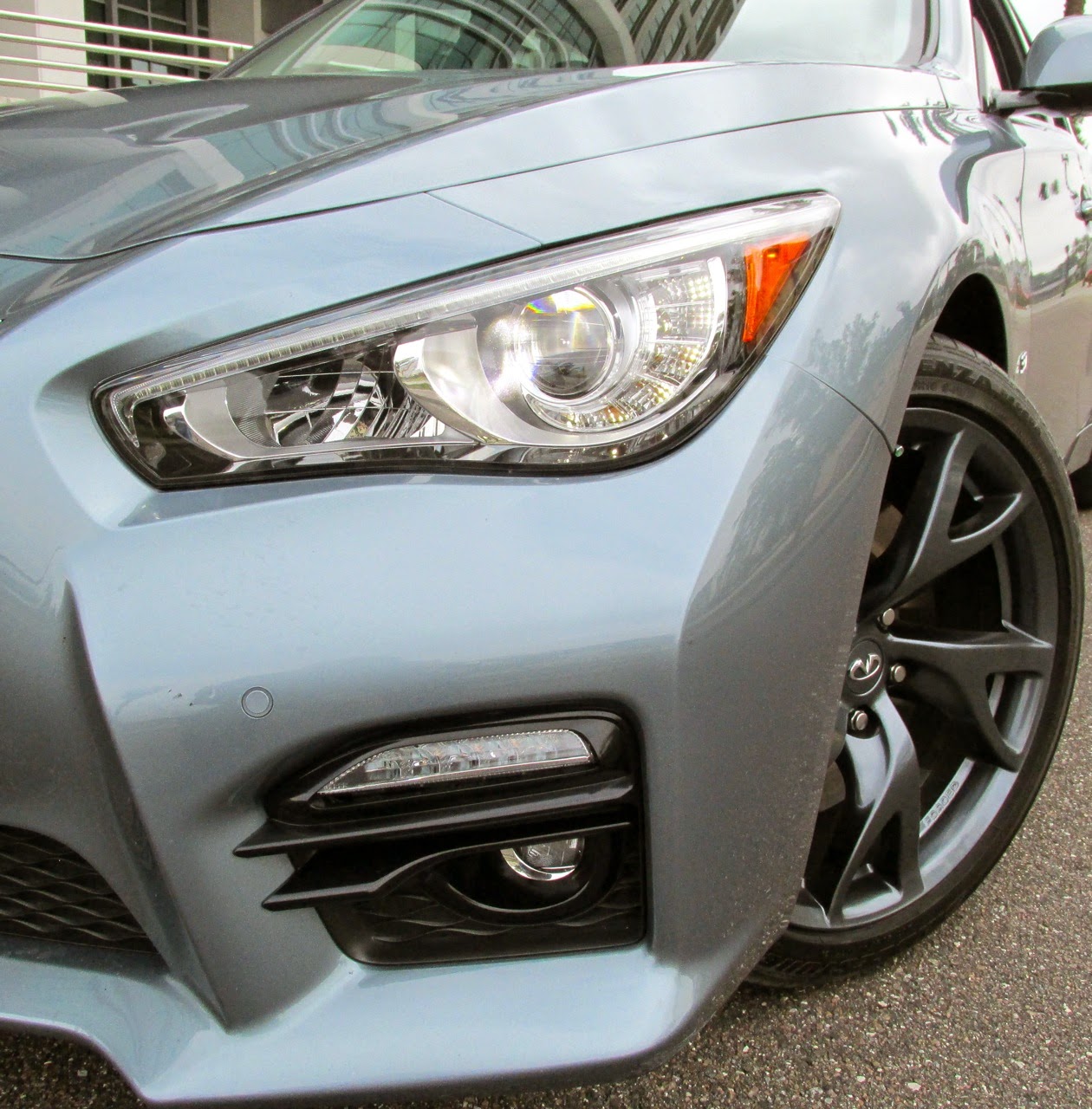 The last G37 was smooth, but lacked aggression. So elements from the very aggressive ‘09 Essence Concept were implanted in the Q DNA. That included the glaring sculpted headlights with C-shaped LED daytime running lights and a white LED eyebrow when on, and flank a waved mesh pattern grill. The lower air intake is wide, with an air dam and gloss black side vents with amber LED turn signal bars and inset fog lights. Our tester had five-spoke Rays Engineering gunmetal gray forged alloy wheels wearing low-profile Bridgestone Potenza P245/40R19-inch summer rubber and with large disc brakes visible.

There’s lots of new tech inside the Q50S. Tap the unlock button on the key fob at night and the headlight LEDs glare as more lights glow in the front door handles and under the sills.  Very sci-fi! You slide into well-bolstered leather buckets seats and settle into a very driver-oriented cockpit with slashes of silver, wood and glossy black. The 180-mph speedometer and 9,000-rpm tach retain the familiar purple Infiniti illumination and frame a color trip computer screen. The eight-inch upper screen handles navigation and displays SiriusXM weather radar, sports, stock, gas station and movies. The lower seven-inch Infiniti screen replaces knobs and switches for a myriad of functions. 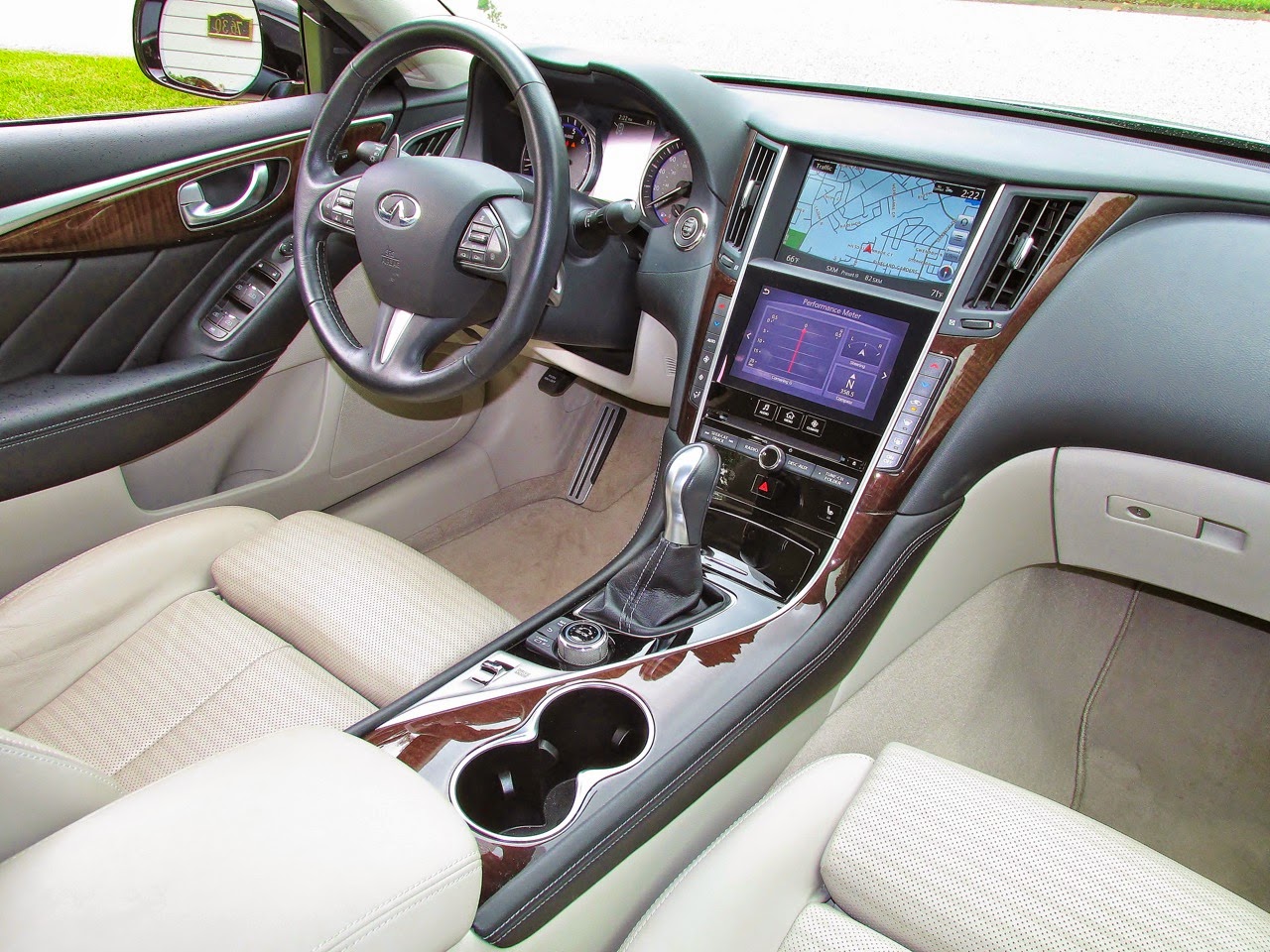 You can display driver performance information like lateral Gs, steering wheel angle, fuel flow and acceleration. It displays lateral acceleration on a sine wave-like display, but only up to a half-g, and that’s practically any turn. There are no gradients on any of the fuel displays, just a moving bar. It looks cool, but doesn’t work as well as other sports car displays. Drive Mode sets throttle and transmission response to sport, economy, standard or snow; steering to light, standard or heavy with quick or casual response; and active trace control that brakes to help cornering. Some of the displays are really overkill.

And there’s more. The Bose audio system with 14 speakers sounded great. There’s a button to activate the surround view – a pseudo birds-eye camera system to show you what’s around the car, and a fisheye front or rear view to see what’s coming from the left or right. 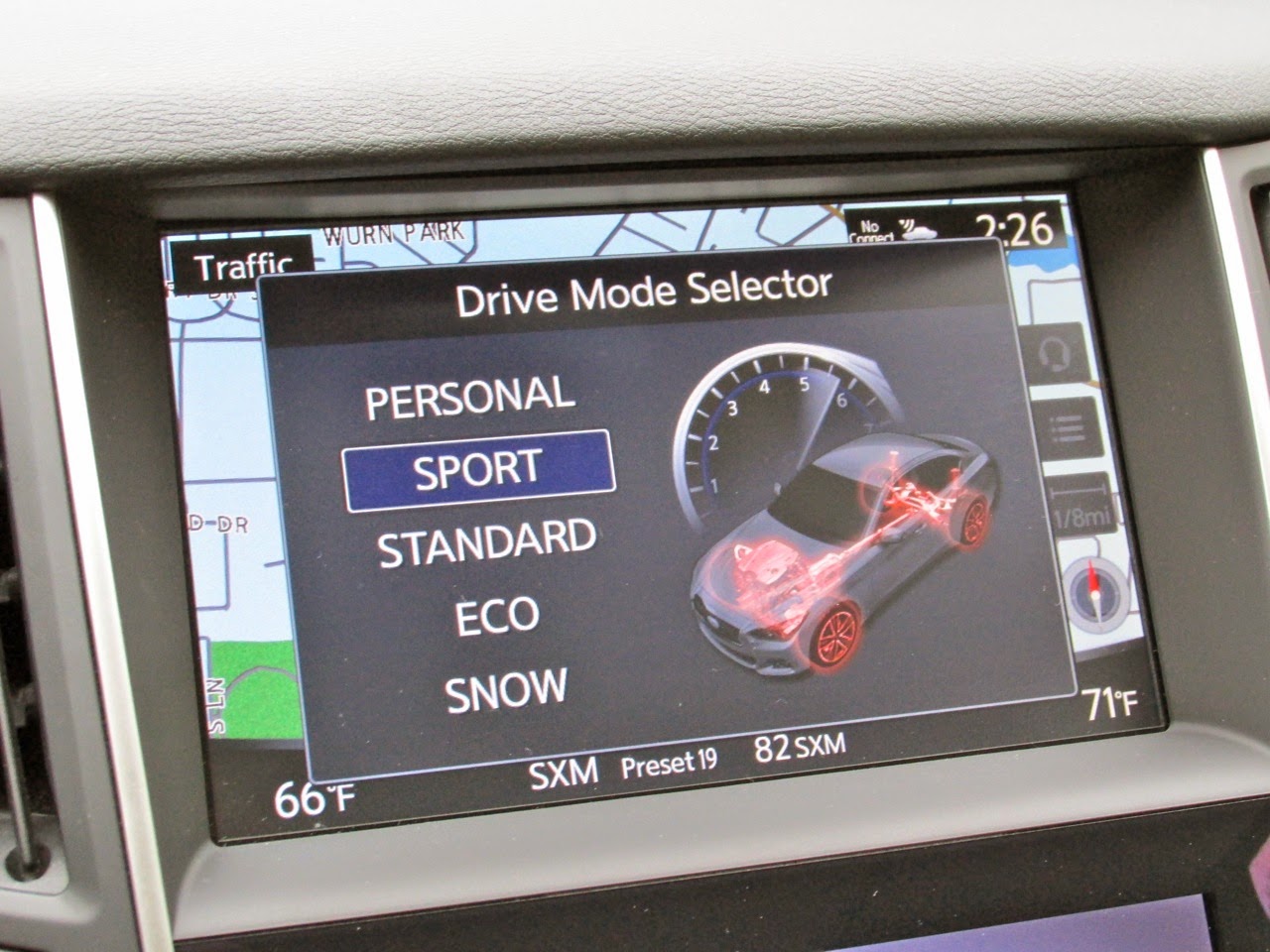 We had Intelligent Cruise that maintains distance and speed with the guy in front, then slows, stops and resumes travel in stop-and-go traffic. Forward Emergency Braking warns the driver of what the car in front is doing but claims to also track the one in front of it and apply brakes if they are all slowing down.

Active Lane Control’s camera-based system beeps when you lane drift, and makes a small steering wheel input to keep you in lane. A Lane Departure Prevention system makes steering corrections when the camera detects road surface changes or crosswinds to get you back in lane if you wander. It constantly nudges the steering and actively fights input if you change lanes without a turn signal. I shut it off – too much of an electronic nanny.
A new thin front seatback design gives more rear foot room, and more head room despite the sloping roofline. The trunk was usable too at 13.5 cubic feet. 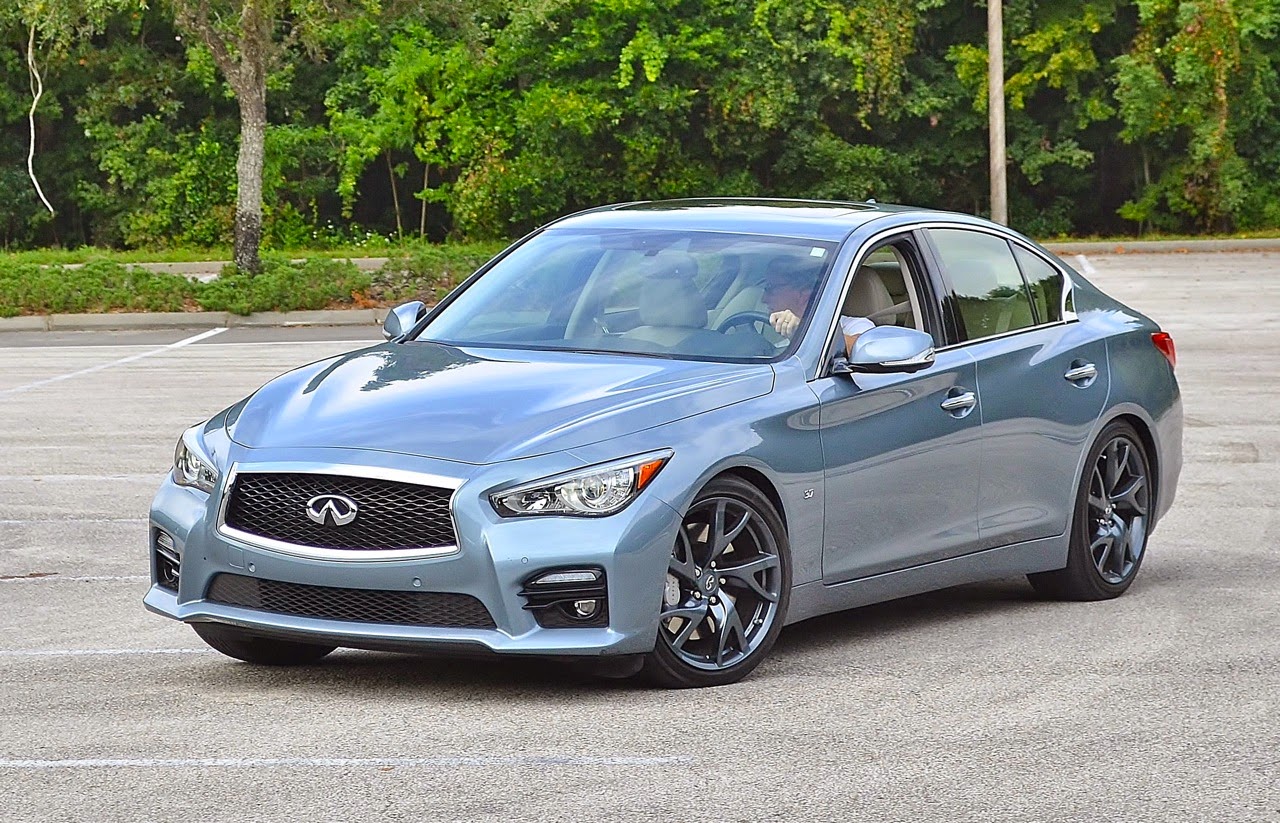 The Infiniti Q50S is drop-dead cool looking, plus roomy, quiet, comfortable and powerful. But for all its good looks, the Q50S seems to have too much tech on its side. Of course, if you really want an Infiniti with some Red Bull in its veins, just wait for the Q50 Eau Rouge with a 560 horsepower Nissan GTR under its even more aggressive body!