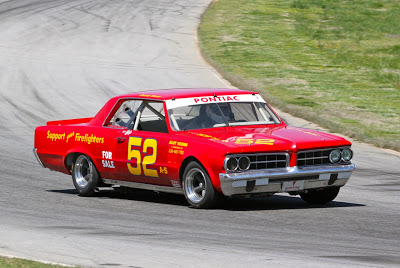 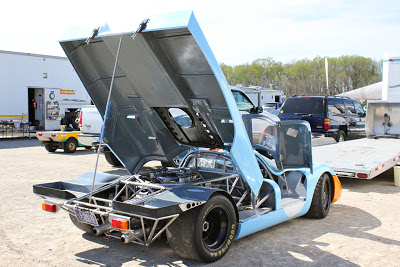 Alfred Tennyson famously and probably rightly said “In the Spring a young man’s fancy lightly turns to thoughts of love.” But sometimes in Spring, carguys’ thoughts often turn from not-so- lightly to loud! So it was at VIR (Virginia International Raceway) this past weekend as Mother Nature delivered warm temperatures and clear skies. 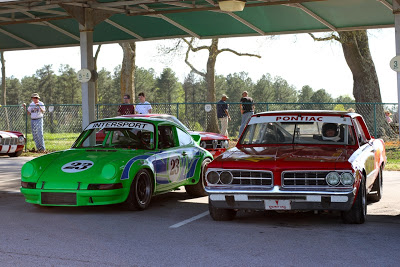 Waiting their session, Alan Friedman in His Porsche 911 RSR waits patiently with Dennis Moser‘s red Pontiac Tempest/GTO. They had a couple good skirmishes over the weekend and added to the diversity of the field in the Large Bore sessions. Moser’s Pontiac features a popular Chevy small-block and this road racer sounds like pure American Muscle.

Moser’s # 52 Pontiac is very highly prepared racecar with a number of NASCAR features like a
cowl induction air cleaner. Note rear spoiler, NACA vents in the plastic rear side windows, reworked trunk lid hinges and the rear window hold-down straps. This car brings back
memories of the Herb Adams/Bob Tullius Silver Bullet/Gray Ghost Pontiac that stole
the show during the 1971 Trans Am season! 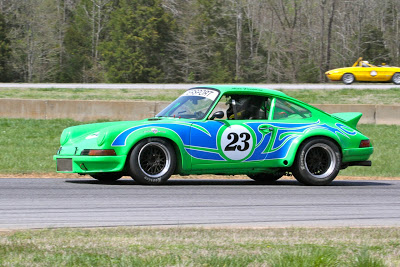 Alan Friedman comes out of Turn 2 in his Porsche 911 RSR. It reminds me a little of the Hippy Porsche, a 917 with a very distinctive paint scheme that raced at Le Mans. In the background is our friend Caesar Cone pushing his Alfa hard down the front straight toward Turn 1. 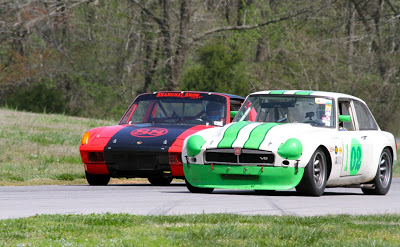 Another car making wonderful V8 sounds was Les Gonda’s MG GT, seen here coming into Turn 2 in lockstep with a Porsche 914-6. MG built about 2,500 of these, none exported to the U.S.  The engine was the former GM BOP 215-inch aluminum V8. 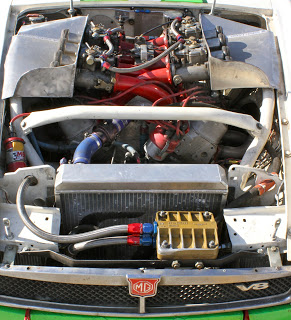 After BMW acquired Land Rover, they inherited this engine and subsequently re-engineered it for added durability. Gonda’s car is equipped with a sleeved Land Rover engine with four sidedraft Webers on a home-brewed cross ram manifold, right, hooked up to a five-speed box and a Ford eight-inch rear. Other goodies include vented, plastic windows, lightweight spring deck latch and fiberglass bodywork with “Sebring Flares,” and roll pans in place of bumpers. The only British part remaining is the roof panel!

Before we leave the V8 scene, check out George Ralph’s Superformance Mk III (Cobra). Here he chases Bill Power’s Datsun 2000, in BRE racing livery. Both are riding the curb in Turn 4. below. 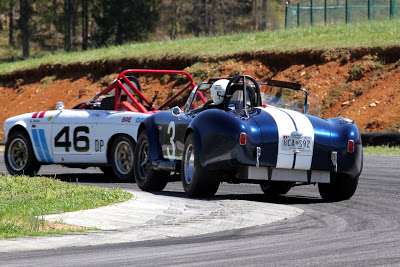 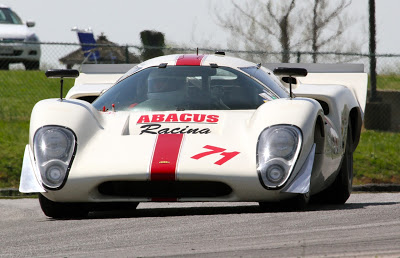 William Thummel’s Lola T70 made great use of its American power plant and English chassis to give him a very quick ride around VIR. Note the heat waves rising from the car. This car is from a time when aerodynamics was beginning to play a really important role in racing. Note the front canards and the rear spoiler with lip. 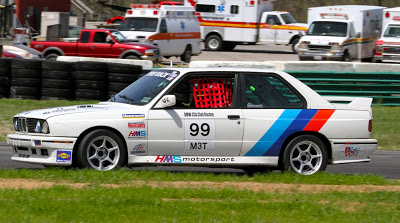 BMWCCA brought their club racing program to the Wild Hare Run. Thirty-two BMWs of every model and color blanketed the 3.27-mile course. Also on the program was the BMW Club of America’s racing series. Over near NASCAR Bend (aka Turn 3), Bill Glavin gets into it in his M3.
There was something for every racing taste at the season opener, hinting that it’s going to be a great year for vintage racing in southern Virginia.