Skip to content
Back in the day, no county fair was complete without some form of racing. 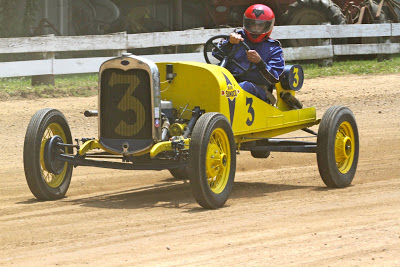 There was a time in America when summer revolved around a County Fair. Entertainment for the entire family could be found there, including death-defying daredevils racing on dirt ovals, often more suited to horse racing. These brave drivers in their earth-bound flying machines lived a nomadic existence traveling from one fair to another.  The Latimore County Fair, York Springs, PA recaptures that feel. Food, music, swap meet, flea market and games mix with laps around the half-mile oval to transport you back to another time.

Bob Frutiger’s yellow #3 roadster, above, based on a Model A, has been “stripped” to the max! Then its engine was given a period-correct hot rod rebuild, featuring pieces from such legendary speed equipment builders as Winfield and Burns. The added power is enough to tax the mechanical brakes and stock, splash lubricated bottom end. Bob is a young 80 years old and speaks with pride about turning laps at nearly 55 mph in a car he built himself! 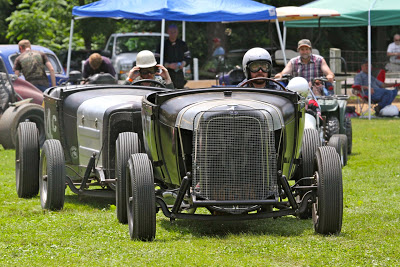 Likely much younger than Bob and certainly younger than the cars they drive, Jeremiah Thomas and Zach Suhr treated us to a reminder of the roaring roadsters once so common in American racing. Looking every bit the part – from their cars to their driving suits and helmets – both drove their Flathead-powered machines, above. Check out Suhr’s shop, http://suhrsc.com/ 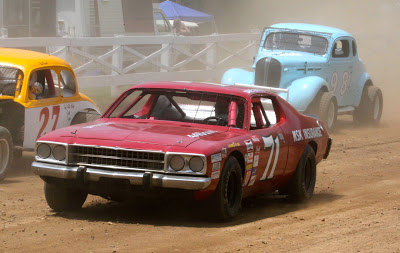 For fans of modern-era NASCAR, it is hard to fathom that at the origins of the sport racers competed almost exclusively on dirt. Racing at dirt ovals would continue until 1970 when Richard Petty’s Plymouth would take the last win for the premier NASCAR division on dirt
at the Raleigh State Fairgrounds. It took more than a little “fortitude” to wheel a
stock car around tight dirt ovals. 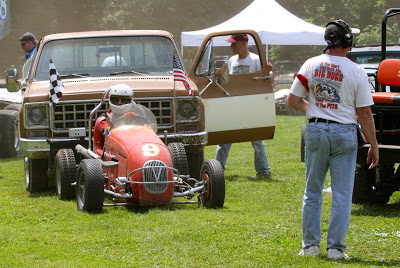 This Kurtis-Offy Midget, above, can trace its racing roots back to AAA days and has run competitively across the country. Less well known is that it is also a record setting Bonneville racer, still holding an international record for under-two-liter naturally aspirated cars. Its present caretaker is the historic racing book author Gordon Elliot White, http://www.amazon.com/Gordon-Eliot-White/e/B001HCXVEW Getting into the truck to push White off is Rick Mandelson, a driver of note in his own right, http://www.rickmandelson.com/ 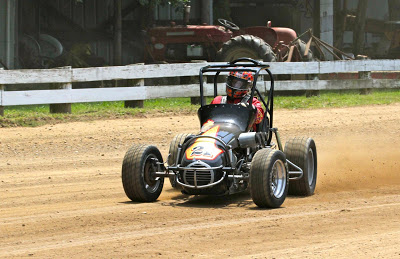 Randy Mausteller told me exactly where to stand to capture this classic tail-out dirt track shot! Mausteller has been racing Midgets since the 1960s, including this car, above, for a good part of that time. His car is SESCO-powered, which is essentially half of a small-block Chevy. 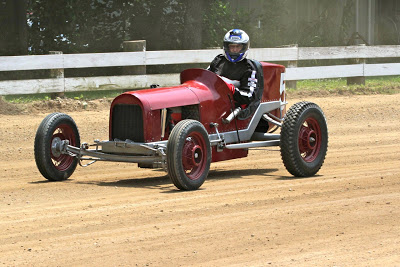 This is what a “Big” car, above, would have looked like in the 1930s, based on stock components one could acquire or build themselves. The age of bespoke racing parts or billet componentry was a way off. The driver sat up high in full view and steered the car with a wheel set at a low angle, elbows pointed out with little protection. Tires were ribbed at the front with “knobbies” in back; brakes usually only fitted at the rear. 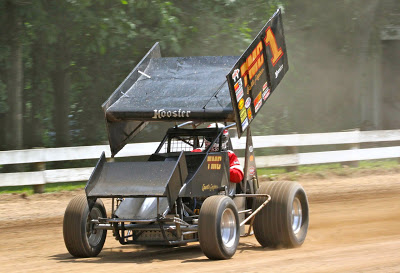 As we move forward along the American dirt racing timeline, we see the same type of evolution as found in other racing genres. The driver is now buried in a car wrapped in a “safety cocoon.” Generating downforce, above, is often more important than streamlining. No longer are
stock parts modified into racing ones, but now they are made from scratch solely for their intended usage.  Tires are wider and last for laps rather than seasons. What hasn’t changed
is that singular purpose; get around a track as fast as you can. 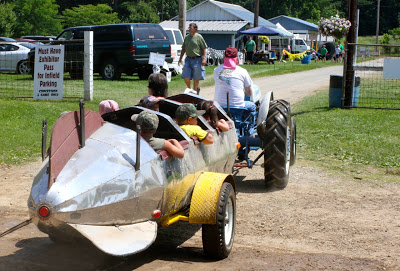 While visiting the Fair we checked out the Eastern Museum of Motor Racing. For additional information and an events schedule, please visit http://www.emmr.org/