Skip to content
In a world full of Mustang stallions, this 1964 1/2 Shorty truly is a Ponycar. 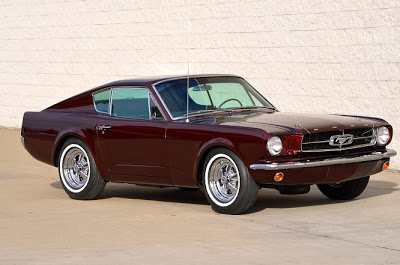 Leave it up to the creative minds that run the Amelia Island Concours to come up with a whole new class for show cars:  WHAT WERE THEY THINKING? This class, with a philosophy unique to “The Amelia,” is a place for significant and interesting cars that fit no class, category or commercial orthodoxy. Nearly half a century later, we still don’t know what Ford was thinking when they commissioned the one-off 1964 ½ Shorty Mustang, owned by Bill and Chris Snyder. We do know that they created one man’s dream car. We just don’t know why!

It’s fiberglass from cowl to tail, and seeing it is like hearing a familiar piece of music, but in a minor key! All the design cues that shout Mustang are there, but they’re wearing someone else’s clothes. In this case, the fastback fiberglass panels created by Andy Hotton’s
legendary Dearborn Steel Tubing and fitted on a pre-production Mustang platform
originally pulled for R&D. 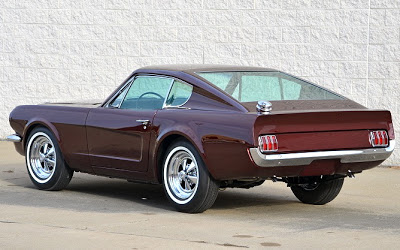 “It was custom built and became part of a Ford traveling show,” said Snyder. That’s where he first encountered the fiberglass Mustang. “I loved it, and I’m gonna buy one.'” The Ford salesman said that there would be no such car for sale and that this fastback Mustang was likely headed for exile or worse.

Stylist Vince Gardner designed the two-place, one-of-a-kind Mustang fastback. Convinced that his creation would end up either cut or crushed, he stole it and hid the fiberglass mystery Mustang in a warehouse in Inkster, MI. Gardner was a brilliant stylist who had worked for a number of carmakers and did Shorty while being employed by Dearborn Steel Tubing. He was also responsible for the shortened (18 inches) two-seat Coyote Falcon used by Ford as a showcar/concept in 1963.

He didn’t try to sell it and he didn’t leave a trail. He also didn’t pay the rent for the warehouse. Within six months it was found behind a wall. By then, the insurance company had paid the claim. Ford didn’t want it and the custom Mustang was taken to the insurance company’s New England headquarters and parked outside. A company executive bought it. Soon an ad in a car collector publication alerted Bill Snyder that his two-seat fantasy Mustang was available. The deal was done long distance and, as one of Snyder’s employees was headed for New England, he simply drove Bill’s dream car back to Ohio.

Snyder’s Mustang two-seater started life as one of ten pre-production platforms. The wheelbase was shortened 16 inches and the standard 260 V-8 was enlarged to 302 cubic inches. It’s a recipe that still appeals to Bill after more than four decades.

Scheduled for March 8-10, 2013, the 18th annual Amelia Concours d’Elegance, showcasing the What Were They Thinking? class, will host eight category-defying cars that would normally not find a home on any other Concours field.