Skip to content
As under-appreciated muscle cars go, the enigmatic Mercury Cyclone is about as obscure as they come. ‘But I still love them,’ blogs Stephen Cox 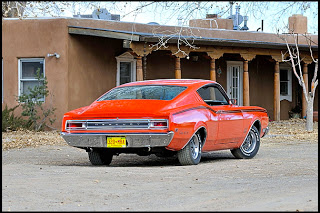 First of all, Cyclone, ’69 CJ, above, was a cool name. Most modern car names are garbage. The Intrigue wasn’t. The Hummer didn’t. The Citation couldn’t go fast enough to earn one. The Probe… well… insert your own joke here. And every Prizm, Tempo and Aztec ever built should be loaded aboard the Enterprise, launched into space and used for photon torpedo practice! Car Guy Chronicles Editor Marty Schorr was Editor of Hi-Performance CARS magazine in 1970 and presented its annual  Top Performance Car of the Year award to Matt McLaughlin, Ford VP and Lincoln-Mercury General Manager, for its Mercury Cyclone, below. 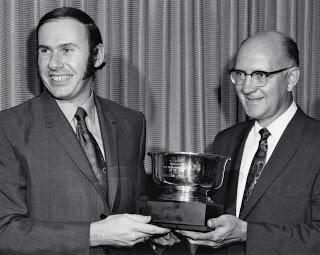 But Cyclone was an awesome name for a car. And today, that car is shockingly affordable and among the best buys on the muscle car market. Let us now delve into the mysteries
of this wonderful machine with a brief, general discourse on chronology and basic ID.

Many listings only mention the Cyclone beginning in 1968, when technically, the Cyclone was introduced as a sub-model under the Mercury Comet (another cool name) in 1964. The Cyclone became a separate nameplate in the Mercury lineup in 1968; hence the confusion. The 390-cubic-inch V8 was standard equipment in the ’68 GT, below. 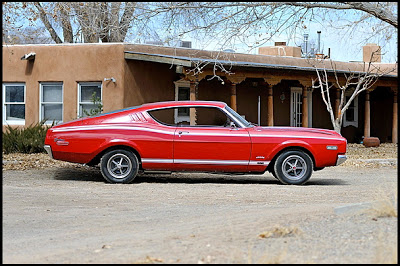 A new CJ model became available the following year. Offered only in 1969, the CJ came with a special handling package, four-speed transmission and a 335-horsepower 428-inch engine that actually produced considerably more. The one-year-only CJ was truly a wicked street machine and remains among the most desirable Cyclones.

The smokin’ hot Cyclone instantly drew the attention of Mercury executives who wanted to cash in on the growing popularity of NASCAR racing. After all, Ford’s high-winding 429-inch big-block was available and the Cyclone was already blessed with the aerodynamically friendly “Sportsroof” (Ford’s commercial name for the fastback configuration). A marriage with the 429 seemed the perfect means for whacking the competition in NASCAR. 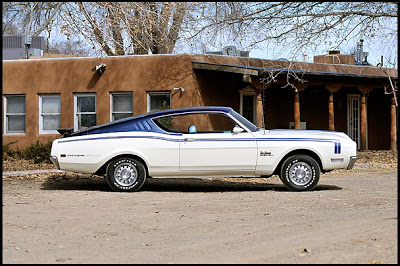 So Mercury hopped up the model’s image with the new Cyclone Spoiler, above, in 1969. Optional engines included the 351, 390, and the stupid-fast 428 with Ram Air package. The car was an amazing street machine with any engine, but the 428 Cobra Jet-equipped Cyclone Spoilers were simply off the chart.

Yet from a competition standpoint, there remained one big problem. The Cyclone (including
the Spoiler version) had an extremely peculiar front grill that featured receding concaves
inside each headlamp. These concaves were a styling hit with the public but an
aerodynamic nightmare on the racetrack. They collected huge amounts of air at high
speeds in parachute-like fashion. 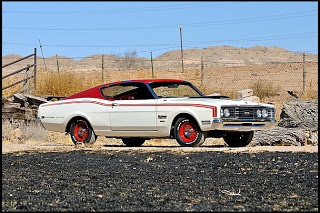 Mercury engineers solved the problem in the most simplistic way. They re-designed the Spoiler’s nose. The new front end was longer and included a new, straight grill that was slightly narrower and eliminated the concaves. The result was dubbed the Cyclone Spoiler II, and it was this body style that would go into action on the NASCAR circuit.

Both the Spoiler and Spoiler II were available in street versions. Surviving cars are easily distinguishable by checking the front end. The concave, “W-grill” cars are Spoilers; those with flat noses are Spoiler IIs.  On the track, the NASCAR version of the Cyclone Spoiler proved itself by scoring eight wins in two seasons despite the dominance of the legendary, super-aero Plymouth Superbirds. 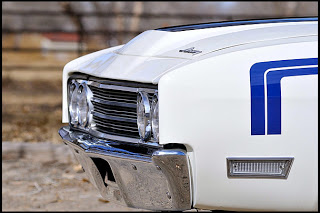 But in 1970, both the Spoiler II and the CJ were dropped from the Cyclone lineup. The Spoiler II fell victim to NASCAR rules that rendered the aero cars obsolete. The CJ was destroyed by unelected government busybodies bent on preventing humanity from having any fun!

Still, the Cyclone didn’t go down without a fight. The Spoiler remained in production and was now available with a stripped down, emissions-approved version of the once-mighty 429. The GT version was also available in 1970, below in blue & orange, with sporty trim packages and an assortment of engine options. 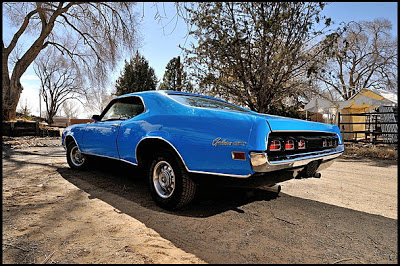 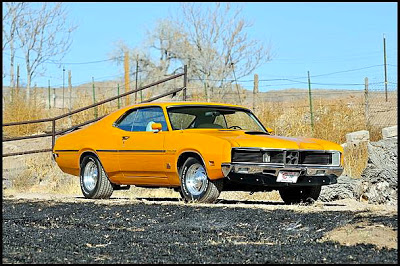 By 1971, sales were waning and the Cyclone, below, was no longer a stand-alone model. The only way to get one was to order a Mercury Montego with the Cyclone option package. And there was no chrome Cyclone badge to be found anywhere on the car. The Cyclone name was recognized only by a small decal just behind the wheel on the front quarter panels. 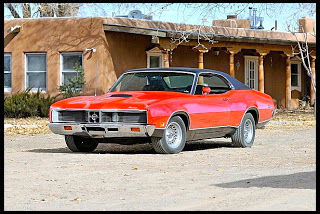 The 351 Cobra Jet was now the top engine option as government regulators slowly strangled the performance market to death. By 1972 the party was over and the Cyclone nameplate disappeared.

The most sought-after models today are the Spoiler and Spoiler II versions. The 1968-’70 GTs are a relative steal, with pristine models available for under $20,000.

If you’re in the market for a unique, authentic muscle car with killer performance at a bargain basement price, the Mercury Cyclone will be hard to beat. Here is a list of Cyclones that sold at the Mecum auction in Houston last weekend: