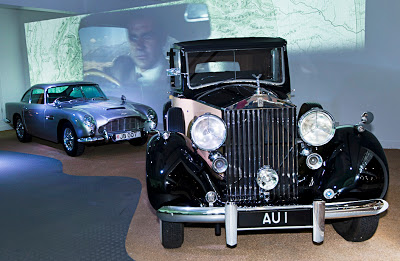 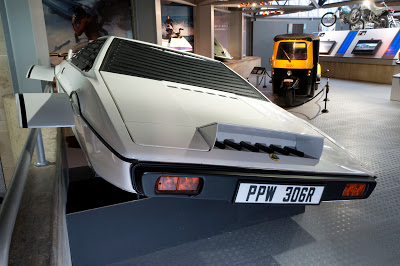 The GOLDFINGER Aston Martin DB5, top, will join 49 other vehicles used in James Bond films in The National Motor Museum at Beaulieu’s BOND IN MOTION exhibition. That brings the count up to 50 to celebrate the 50th! Lotus Esprit, above, is from THE SPY WHO LOVED ME. 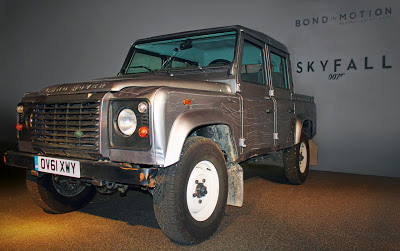 This stunning original film car, a must-see for Bond fans and classic car enthusiasts everywhere, will be on display at Beaulieu for a limited time only. The DB5 has been loaned to the exhibition by the Louwman Museum, Holland. Joining the three SKYFALL vehicles currently on display – two Honda CRF250R motorcycles, below, and the Land Rover Defender 110, above, – is a third scale miniature model of the Aston Martin DB5 which was used in filming SKYFALL.

BOND IN MOTION is the world’s largest exhibition of original James Bond vehicles ever staged, and features a whole range of vehicles from the films, including cars, boats, motorbikes, sleds, jets and many more. Other star exhibits include the gadget-laden Jaguar XKR driven by Bond villain Zao in DIE ANOTHER DAY, the Aston Martin DBS from QUANTUM OF SOLACE, the Bede Acrostar jet famously flown in OCTOPUSSY, and the BMW 750iL from TOMORROW NEVER DIES, plus iconic vehicle action clips from the James Bond films. 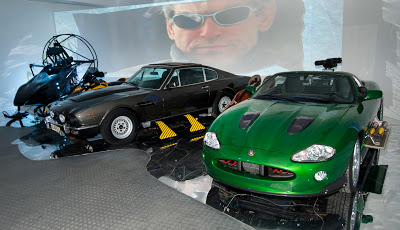 This exclusive, one-off exhibition will remain open to visitors until January 5, 2014. BOND IN MOTION can be seen as part of a visit to Beaulieu, which includes the National Motor Museum, World of Top Gear, Beaulieu Abbey, Palace House and the gardens.