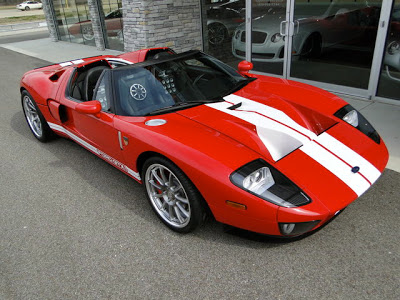 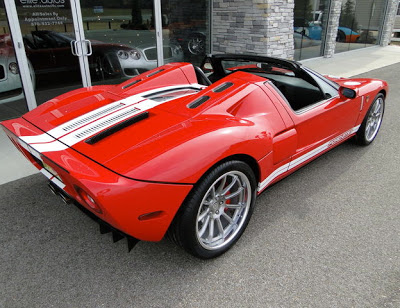 For those who felt the Ford GT was not exclusive enough when introduced, Ford Motor Co. and Genaddi Design Group had an agreement allowing Mark Gerisch to customize new GTs to GTX1 roadsters for customers. They were based on the successful showing of the GTX1 Concept at SEMA. New GTs were shipped to Green Bay, WI for conversions. Original plans called for a limited production of 600 units, but that never happened. Genaddi also offered chassis and interior upgrades, color changes and even butterfly doors to complement fresh air conversions.

It is doubtful that production ever reached triple digits and the red 2005 GTX1, above, is the actual 12th GTX1 built. Production ended in 2008 and more information on GTX conversions can be found on the excellent Ford GT Forum. Used GTX1 roadsters currently command premium prices as compared with stock GTs..

Mike Gulett blogs about the GTX1 at My Car Quest, http://mycarquest.com/2013/03/the-ford-gt-roadster-the-gtx1.html

For more information about the red GTX1, #12, please visit http://eliteautosllc.com/vehicle/ford-gtx1/