CGC’s Jim Palam gets his gypsy on to join the Caravanners in Buellton, California. 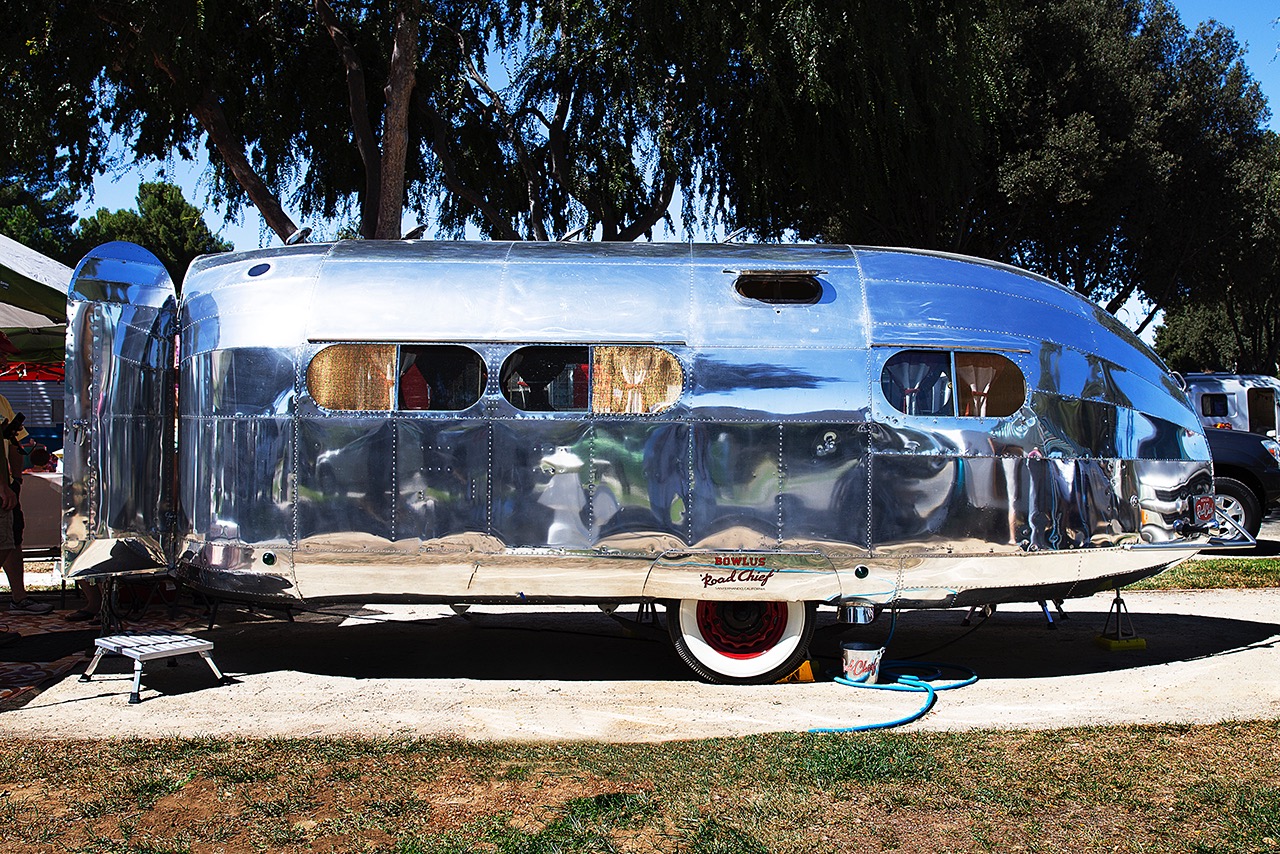 You don’t need to be a nomadic gypsy or itinerant preacher to find yourself footloose on the backroads of America – hitched to a vagabond dream and a vintage travel trailer. No, you just need to put the mail on hold, hook-up your caravan, fill your gas and propane tanks and kiss your 9-to-5 goodbye. 10TH ANNUAL: VINTAGE TRAILER BASH!

Caravanning for leisure finds its roots in Europe and South Asia in the 1800s. It wasn’t until adventure writer Dr. William Gordon Stables purchased his custom caravan from Bristol Wagon and Carriage Works in 1880 that this travel activity became popularized. By the 1920s, Americans and Canadians added their flags to the growing global army of “Tin Can Tourists.” Much of what we see on our roads today are tricked-out RVs, motorhomes, fifth-wheels, pop-ups and toy haulers – but it’s the lovingly cared for, pre-1980 tow-behinds that filled Flying Flags RV Resort and Campground for the 10th Annual Vintage Trailer Bash that we’ll be checking out today at CGC.

Jeff and Pam Gay formed a partnership with Bob and Becky Blair to take on a frame-off restoration and customization of this beautiful ‘36 Bowlus Road Chief trailer, top. Bowlus built 300-plus trailers between 1934 and 1936, applying knowledge and skills from designing and building aircraft. 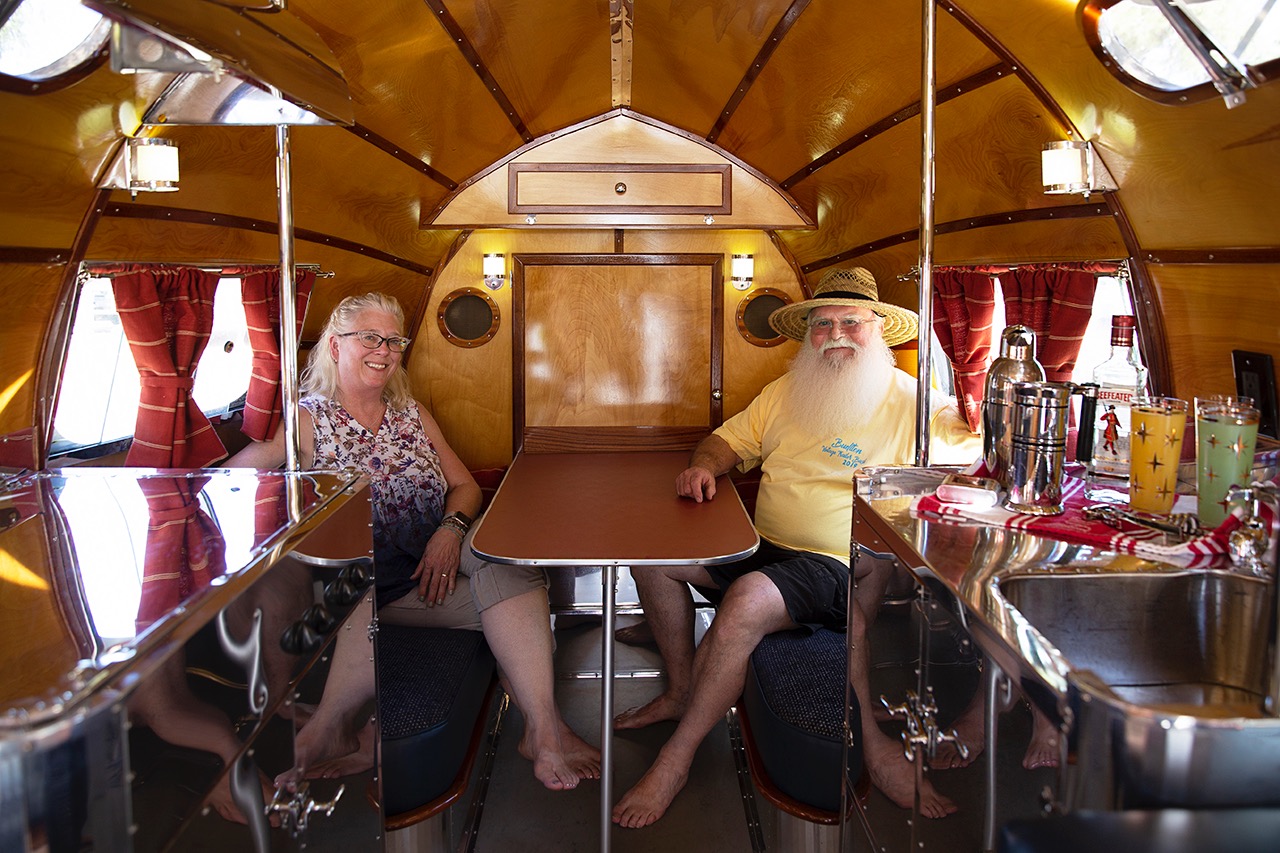 This Bowlus Road Chief features a single, front-entry door for increased rigidity, and master-level wood and metal fabrication throughout the interior. Pam and Jim were kind enough to strike a pose in the tail end – not far from the vintage cocktail shaker and bar glasses. Caravanners know how to live the good life. 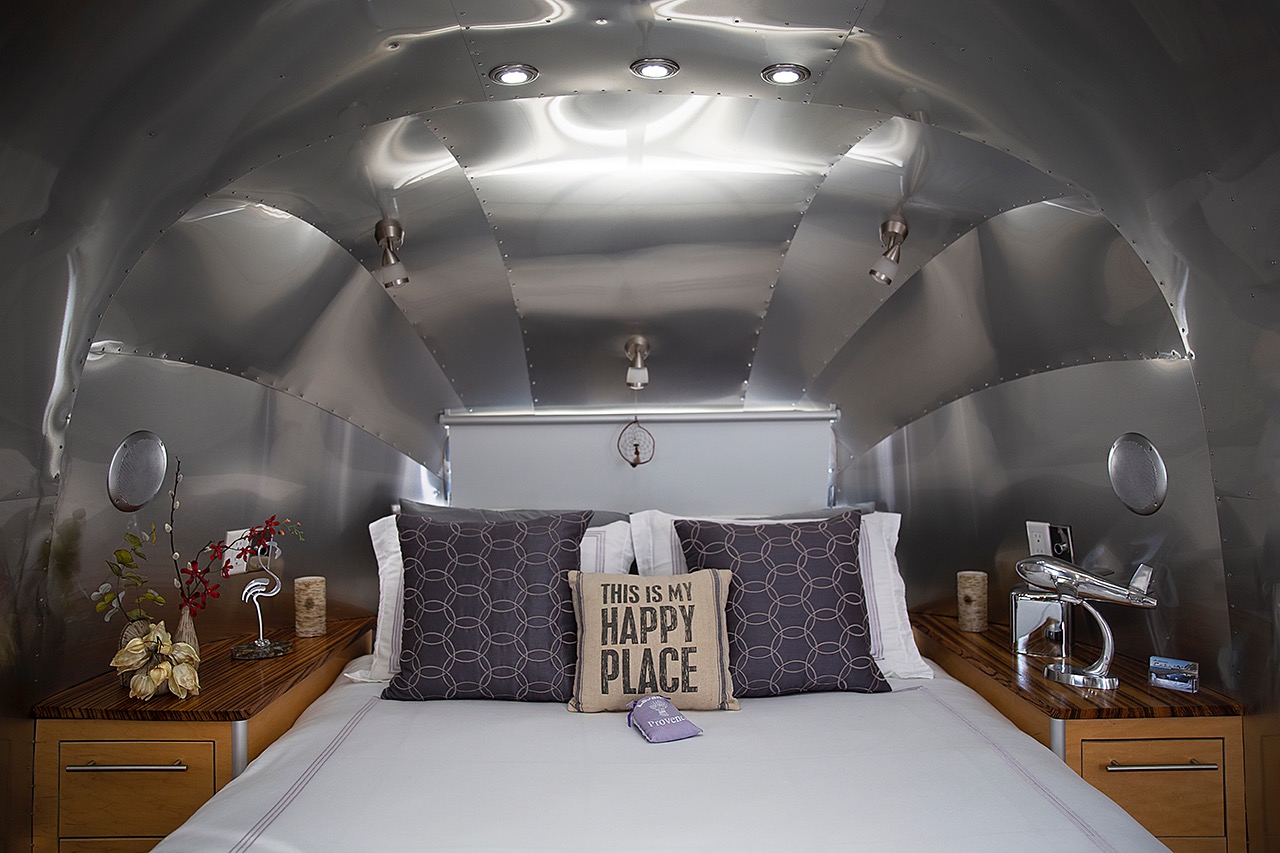 French engineer and entrepreneur Pierre Bogros completely redesigned and rebuilt the interior of his impressive 27-foot. ’71 Airstream Overlander. Its modern amenities are so special that it was even featured on an episode of Jay Leno’s Garage. 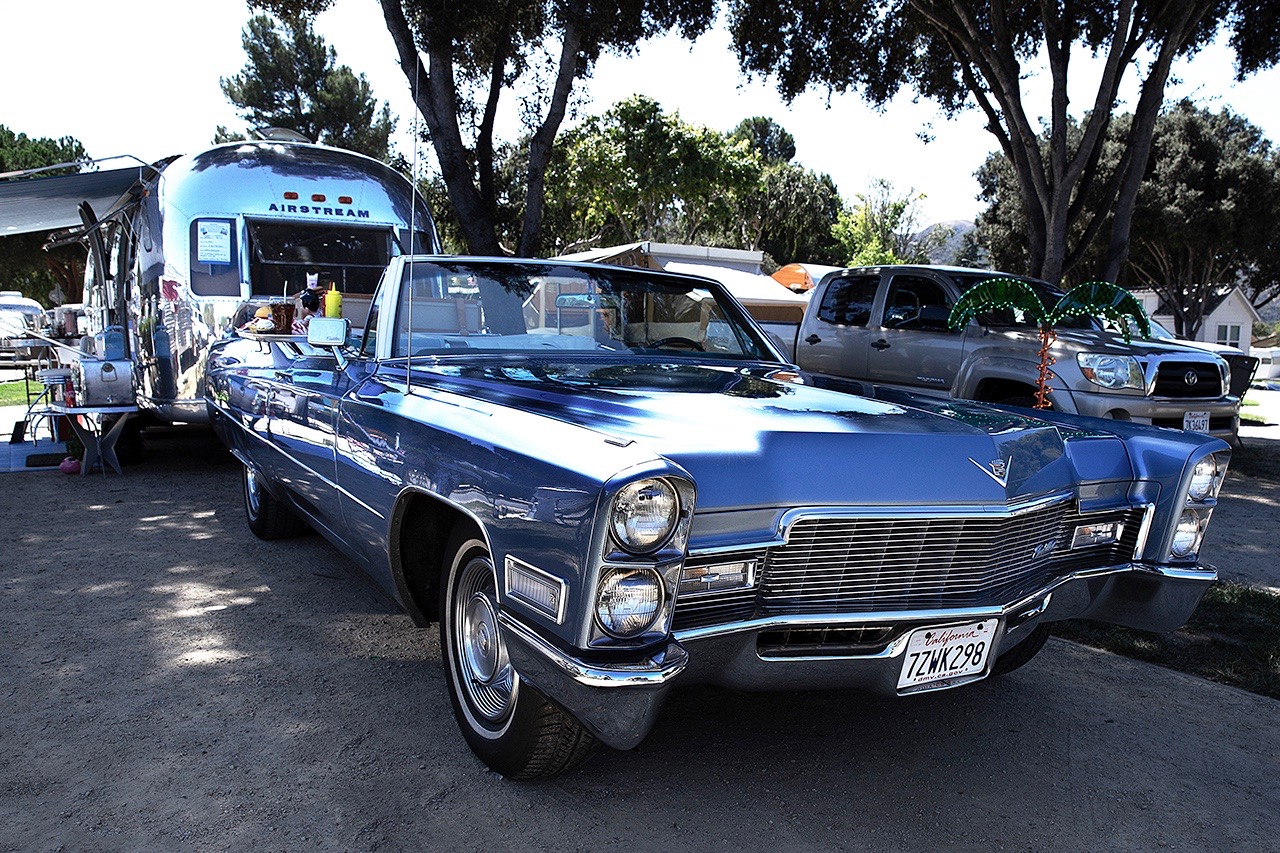 Pierre and his better half Lauretta Smith know how to travel and tow in style. Their ’71 Airstream Overlander gets hooked-up to a classic, metallic blue ’68 Cadillac convertible. By the way, this car and trailer combo is available for photo shoots and films. You can learn more at https://cadiair.com/ 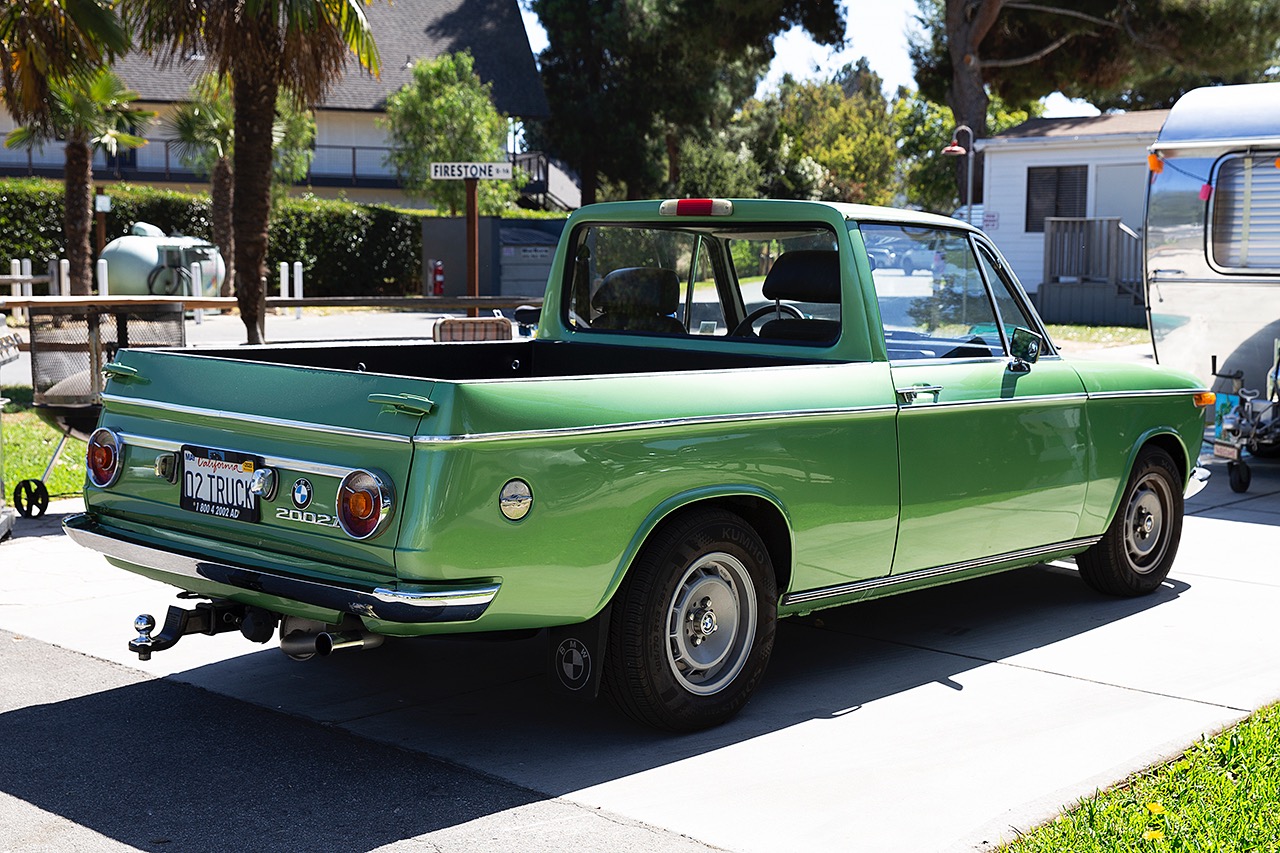 One of the more surprising tow vehicles at the 10TH ANNUAL: VINTAGE TRAILER BASH! was this ’71 BMW 2002tii. I’d be curious to see what you car guys have to say about this conversion of a BMW classic to a pickup configuration. Outside of a few E30 and E92 M3 concept pickups produced for BMW’s 30th Anniversary, I do not believe BMW has a hay hauler slated for production anytime soon. 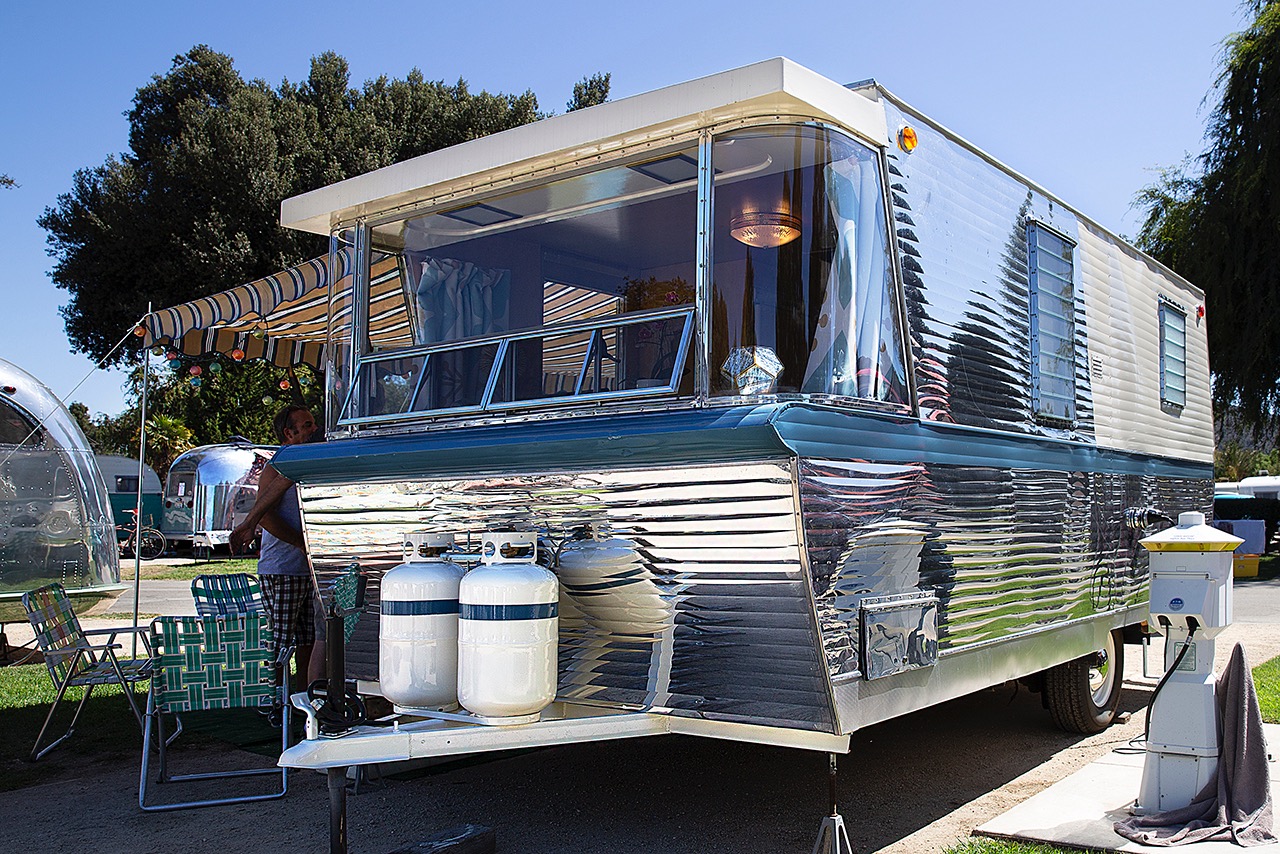 You wouldn’t think that a guy who made his fortunes selling mail-order fruit baskets would be the driving force behind the very desirable Holiday House travel trailers. But it was David Holmes of “Harry and David” fame who produced these big window classics from 1959 to 1962. Not many were produced, so it was a treat to find this chiseled 1960 example at the Bash. 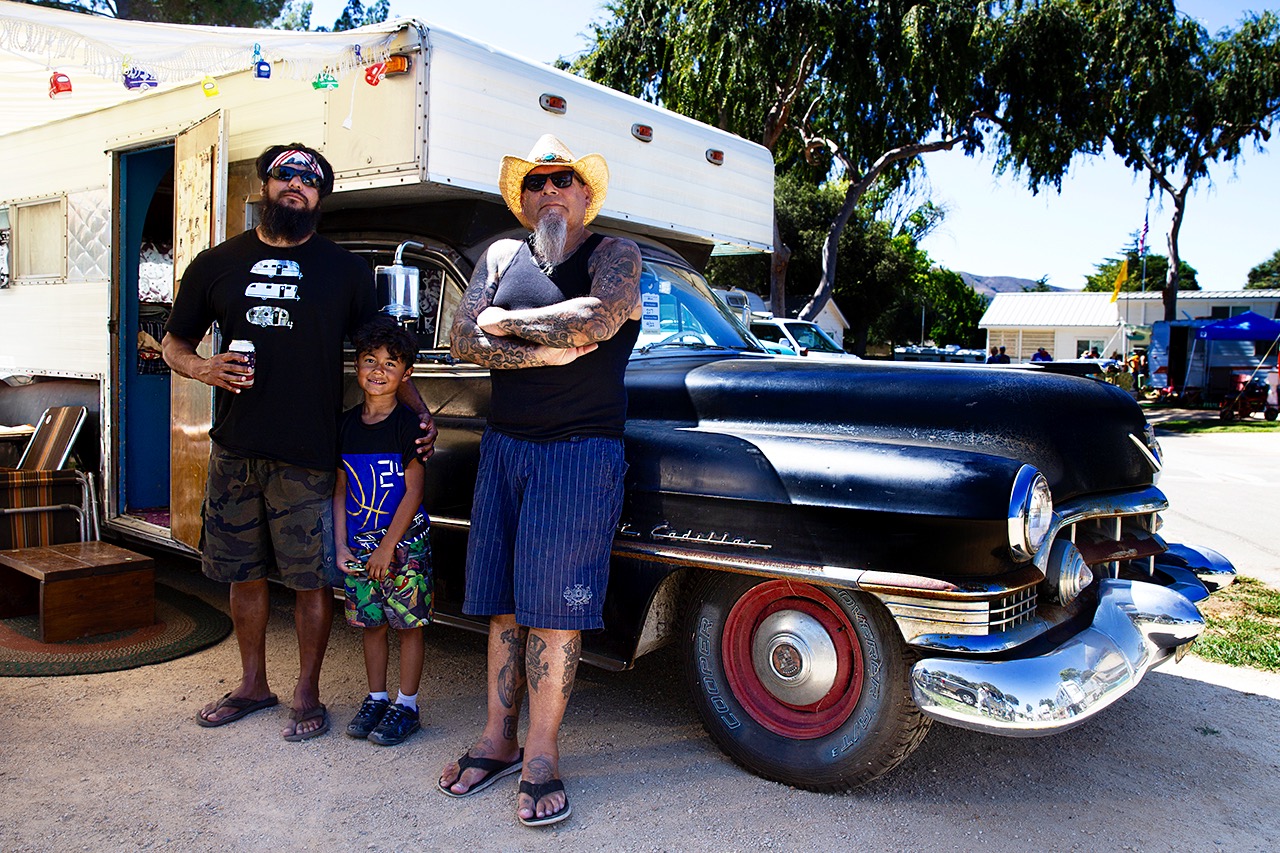 One of the things I love about vintage car and trailer shows is the people you meet. When I started taking pictures of this ‘50 Caddy hearse that was converted into a camper, the tattooed owner George walked boldly over to me and asked, “Would you like some chilled water? You look parched.” Another caravanner – also named George – who with his son, agreed to pose for a Foto de Amigos, soon joined him. 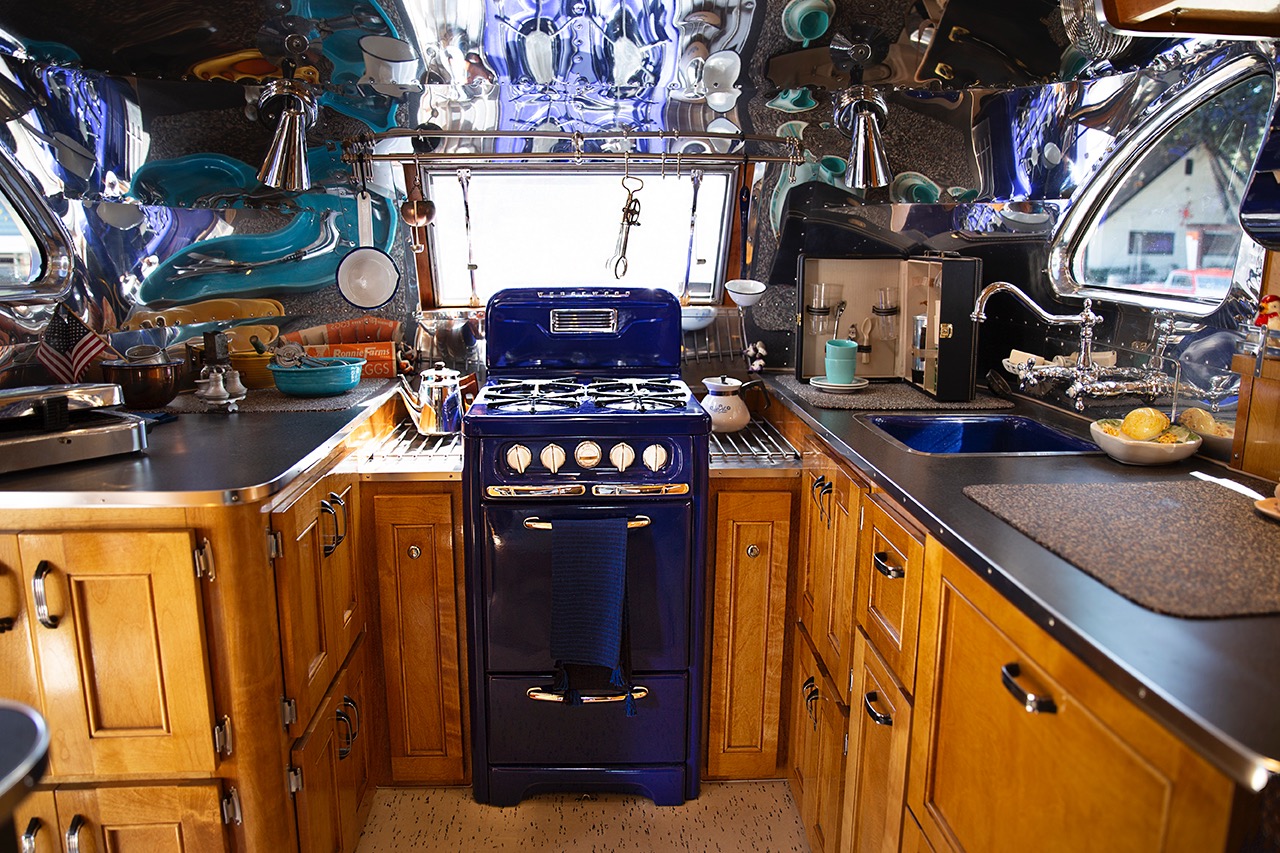 This ’48 Spartan Manor’s super-shiny custom kitchen is anything but spartan. The owners of this custom trailer spared no expense to make this Manor a marvel on wheels. High-tech amenities and custom materials are integrated throughout this showcase. More than a looker, she’s also a sturdy and dependable travel trailer, having journeyed over a 1,000 miles down from Idaho to attend the Buellton Vintage Trailer Bash. 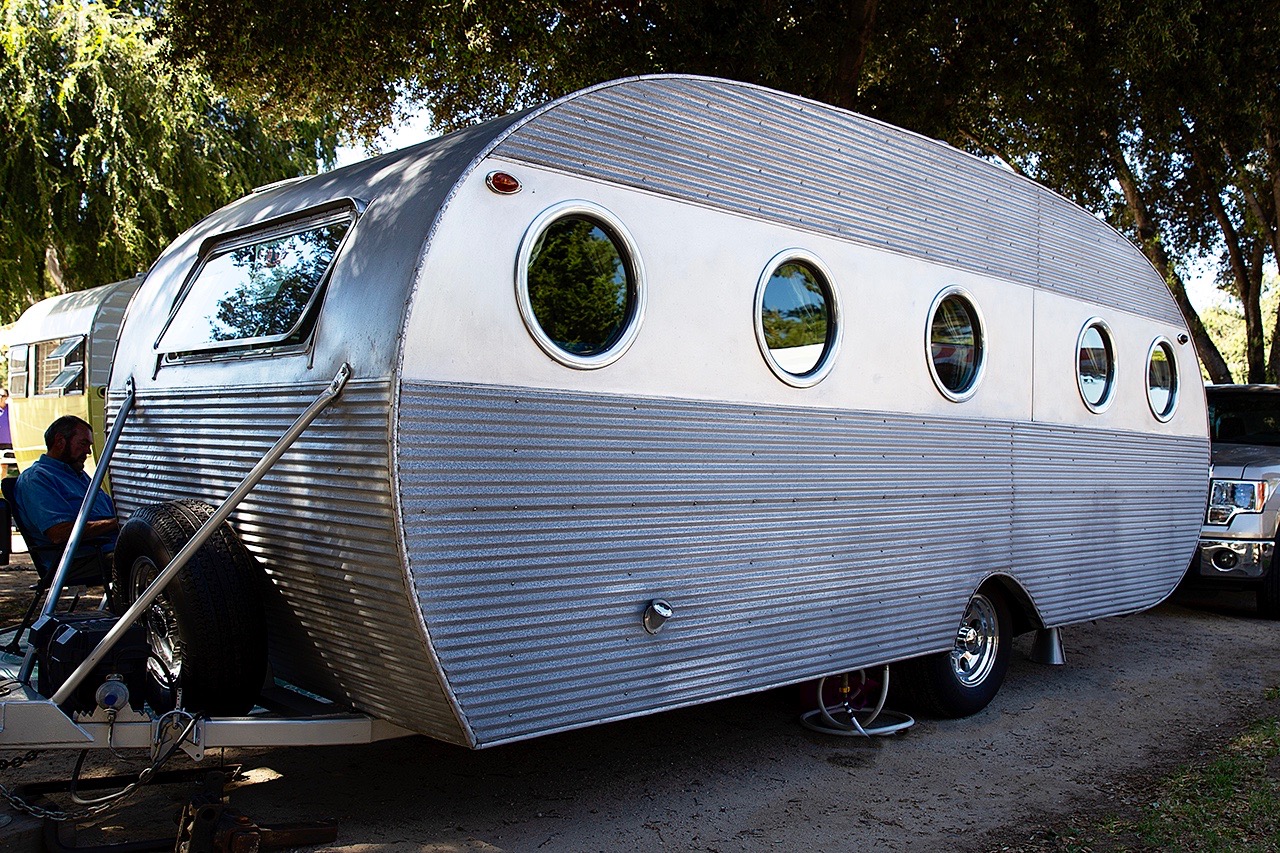 Product design, architecture and automotive styling during the 1950s was unapologetically spaceflight-influenced. Case in point: this 10 portal window, ’53 Airfloat would have fit right in as a lunar space station as it did as a caravan in Yosemite. Layout for this classic is twin beds up front, full-service galley in the middle and dining area, fold-down bed in the rear. 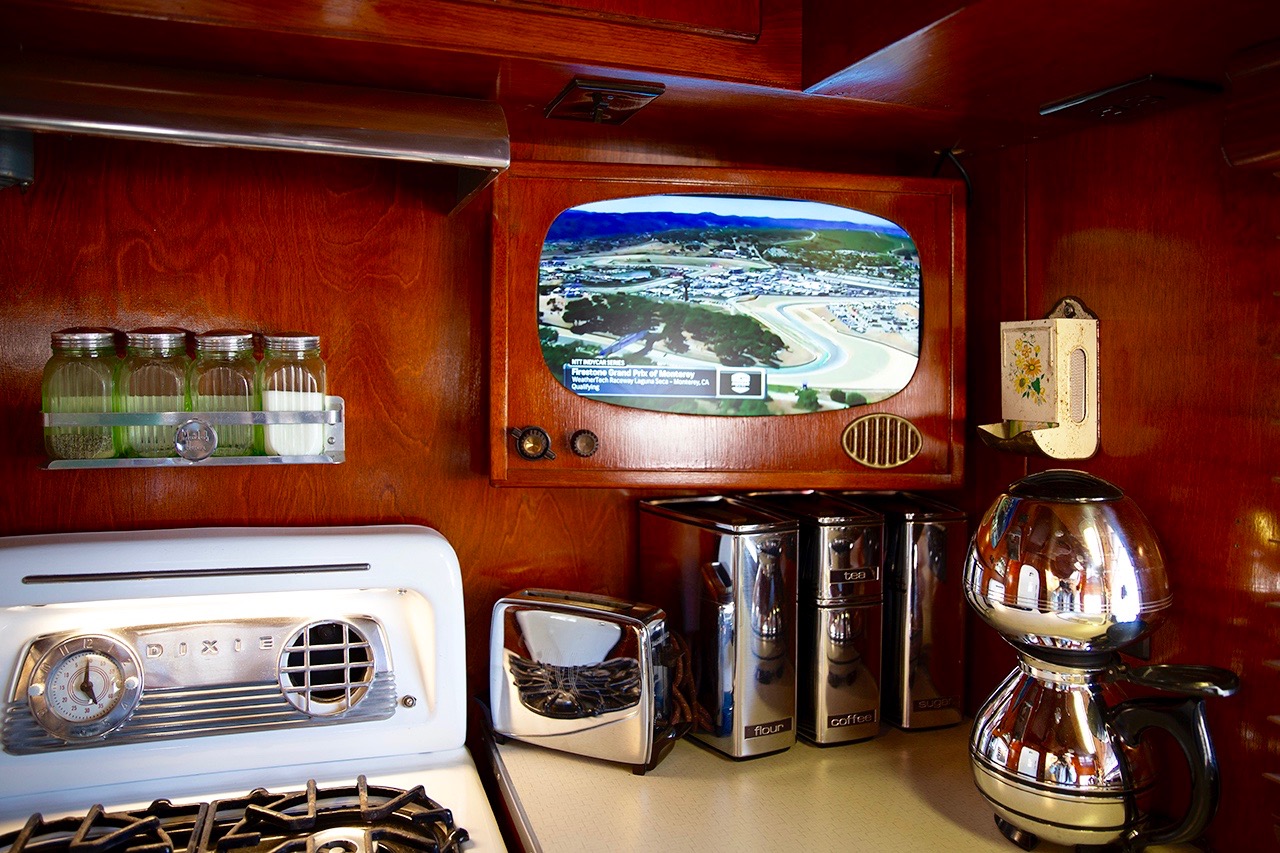 It’s not surprising that many travel trailer owners are exceptionally good with their hands. They apply their skills with woodworking, metal fabrication and period-correct design and decoration to their travel trailer projects. For many it’s the details that count. For example, the exceptional woodwork in this Spartanette was carried over to some modern amenities – like removable oval wood fascias for the trailer’s twin flat-screens. For show, the fascia is attached; for full-screen viewing it’s removed. 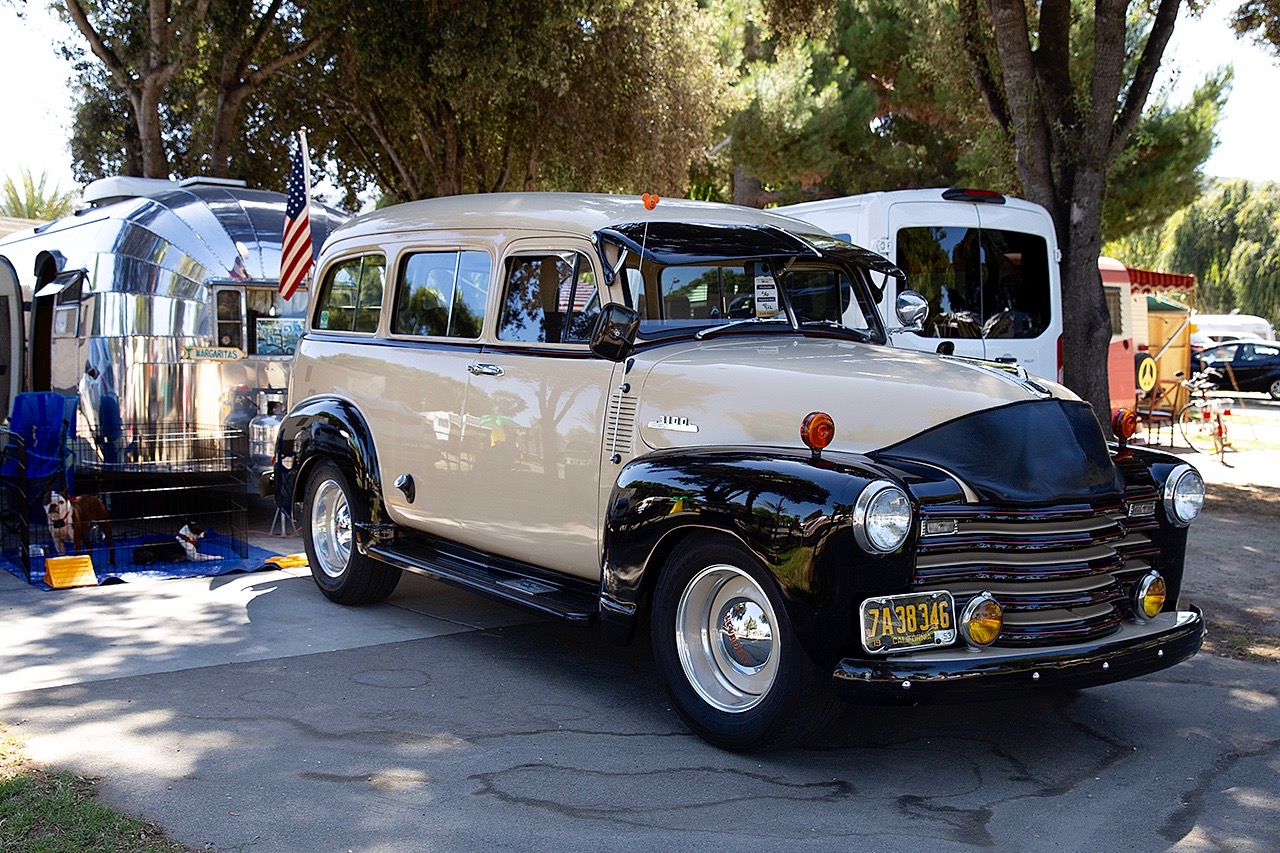 I’m not saying that leather bras are a turn-on. It’s more what’s underneath that raises the heartbeats – like this curvaceous ‘50 Chevy 3100 Suburban. While this Chevy tow vehicle has been moderately resto-modded, the beautiful 21-foot ‘53 Airstream Flying Cloud behind it is glorious in its original, super-shiny, all-riveted, all-aluminum skin. The first production Airstream was produced in 1931; the first Chevrolet Suburban in 1935. 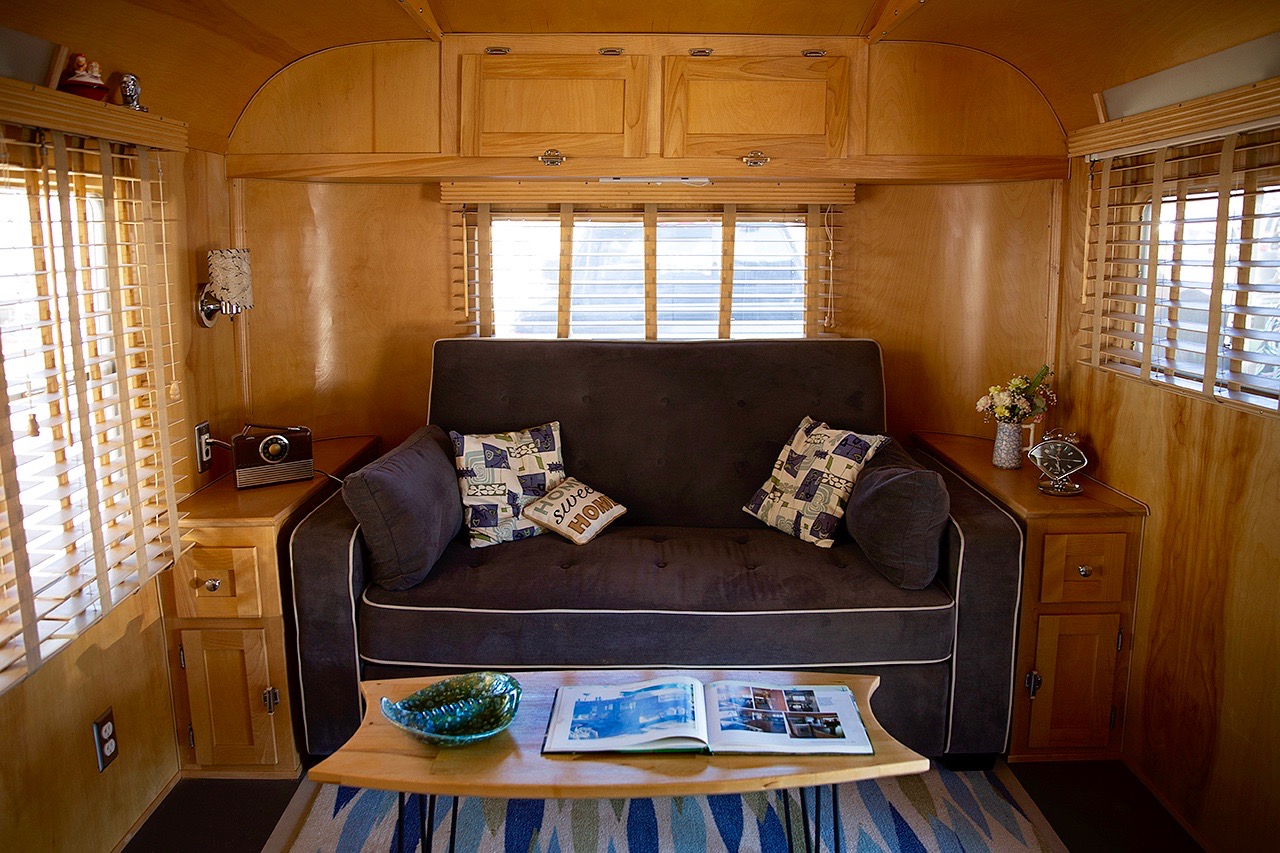 What a great place to relax: Surrounded by maple wood radiance under the curved corners of a ‘50 Westcraft Sequoia’s Pullman-style roof! Bob and Pam Ambuehl’s 27-foot, double-axle Sequoia was restored in 2016. Westcrafts were crafted using advanced aircraft construction methods and heavier gauge aluminum. When first built the trailer cost twice as much as an average Los Angeles suburban tract home! 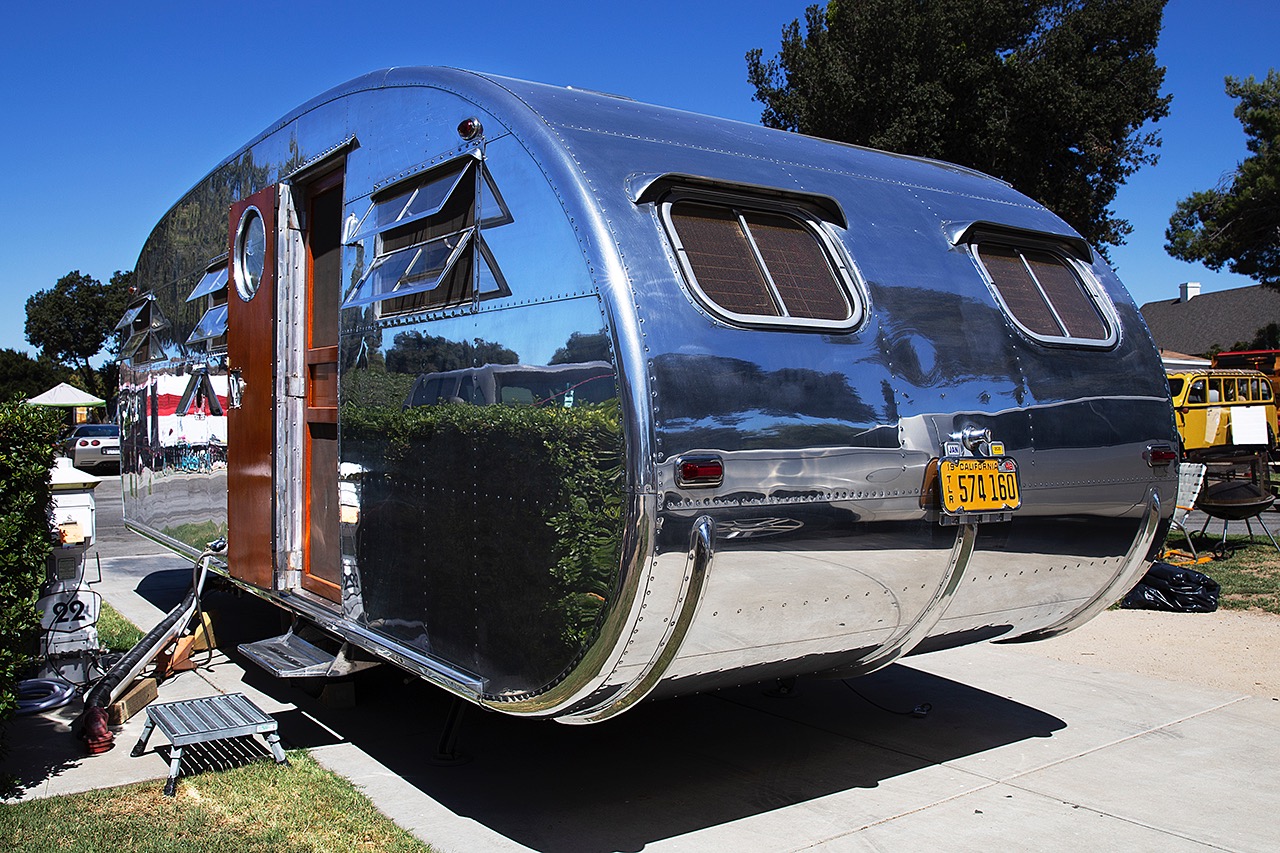 This shiny, 24-foot Spartanette travel trailer is very special. Not because it can seemingly float above the ground, but because it is the smallest Spartan trailer ever made and the easiest to tow. Given Spartan’s reputation, as a manufacturer of high quality trailers, the Spartanette is a very desirable trailer – though rather hard to find. 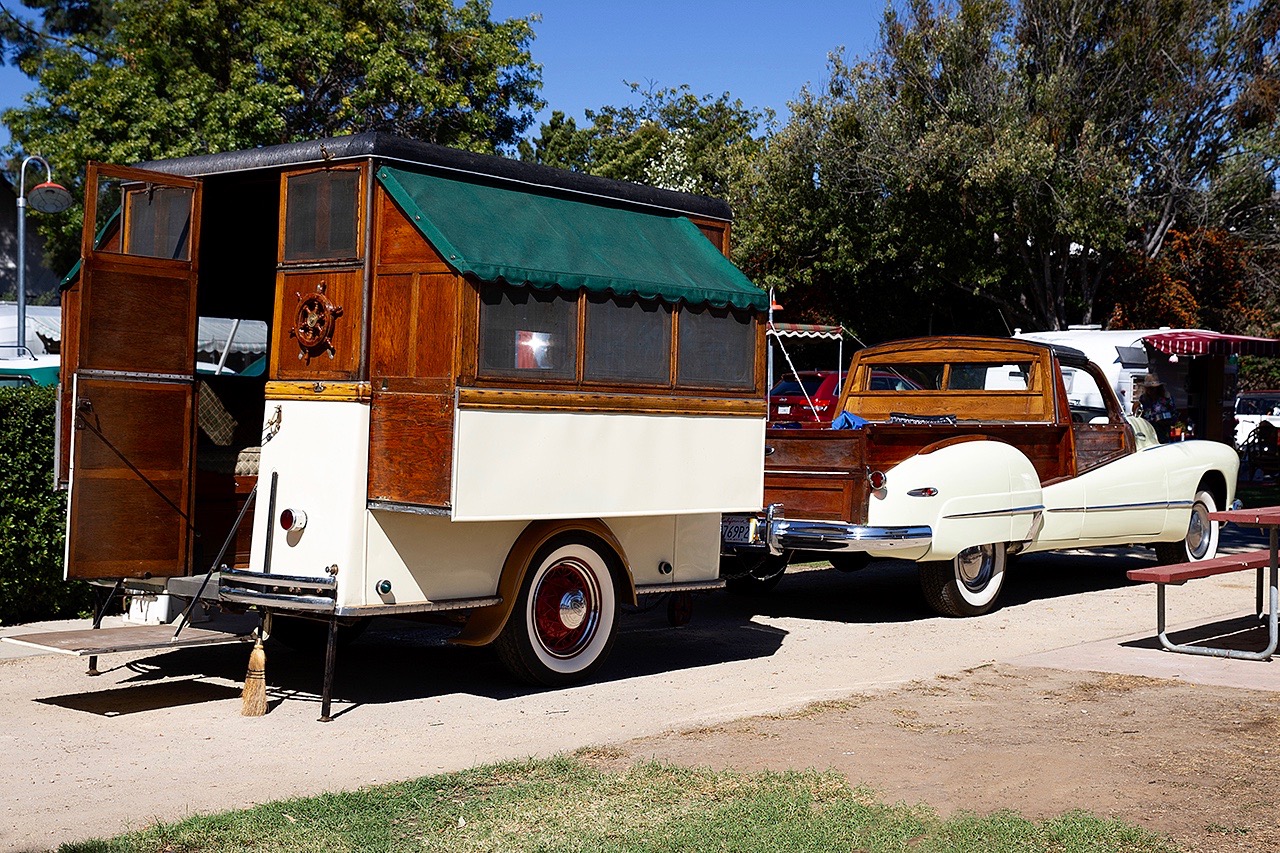 All aboard! This custom Woodie trailer is essentially a replica of a ship’s cabin riding on a single axle. Its beautiful woodwork is carried over to its tow vehicle, a custom ’47 Buick Super Model 56S. The Buick’s curvaceous 1940s styling is somewhat in contrast to the trailer’s sharp, angular lines, but kudos to the builder for bringing a bit of the sea to landlubber land. 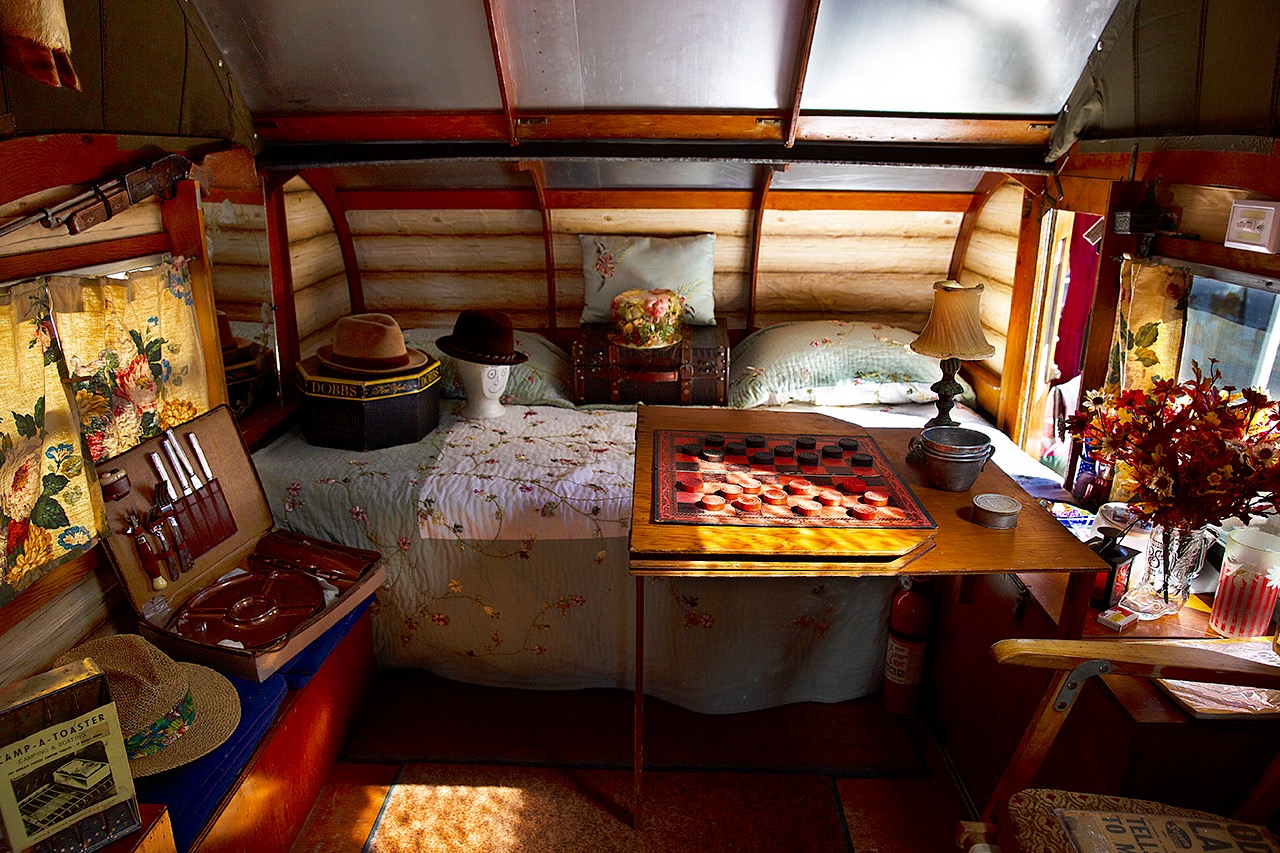 To get this shot I’m standing just inside the doorway of a small, vintage teardrop trailer. I can stand inside because this Standup Teardrop has a roof that angles up approximately 45°. Vertical canvas sides are then snapped-on along with a modular door end-side. Most of these clever Standups were homebuilt using plans available in the early 1950s from Popular Mechanics magazine. 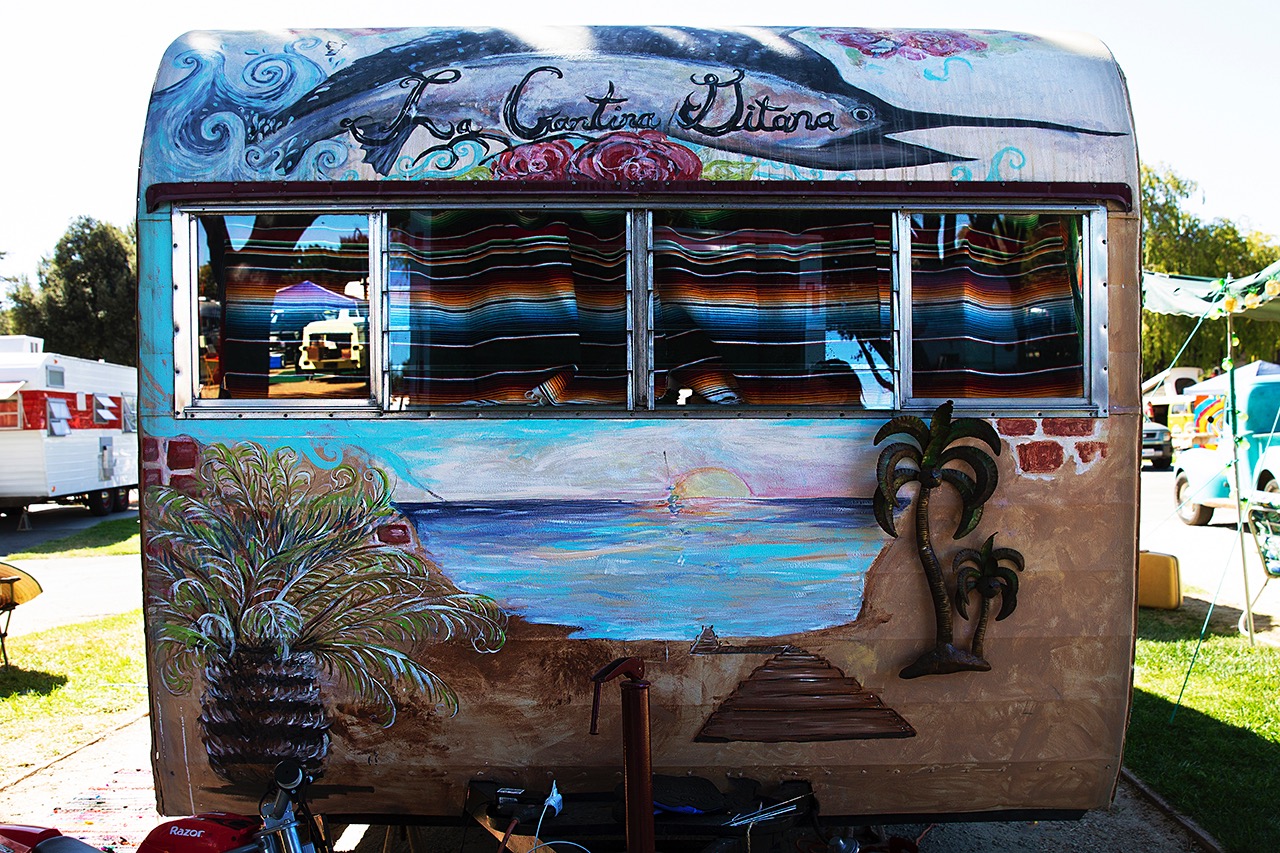 Before you could “wrap” a vehicle in digitally produced graphics and colors, if you wanted to add personalized imagery to the outer skin it would have had to be hand-painted. And that’s just what the original owner of La Cantina Gitana, this mid-century trailer did. He painted a fanciful panorama of a balmy Baja sunset that includes images of a dancing Señorita, a silvery swordfish and merry Mariachis. 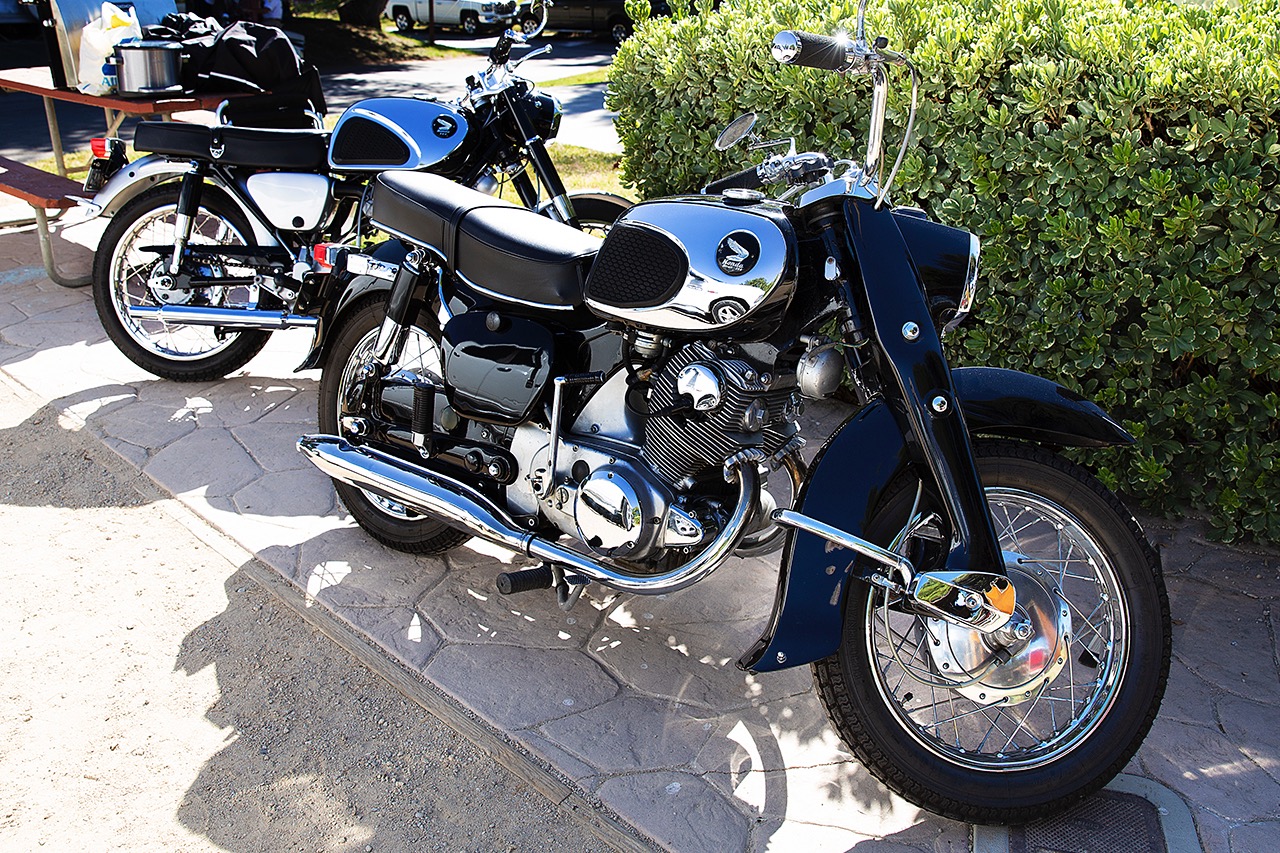 Phil and Wendy Cervantes tow one of the more impressive trailers I’ve seen to these vintage trailer events – a meticulously rebuilt and upgraded ’54 Silver Streak Clipper. This year they’ve added a couple of impressive caravan accessories to their camping pad – a ‘63 Honda Dream 305 and a ‘64 Honda Super Hawk 305. Life is good in Cervantesland! 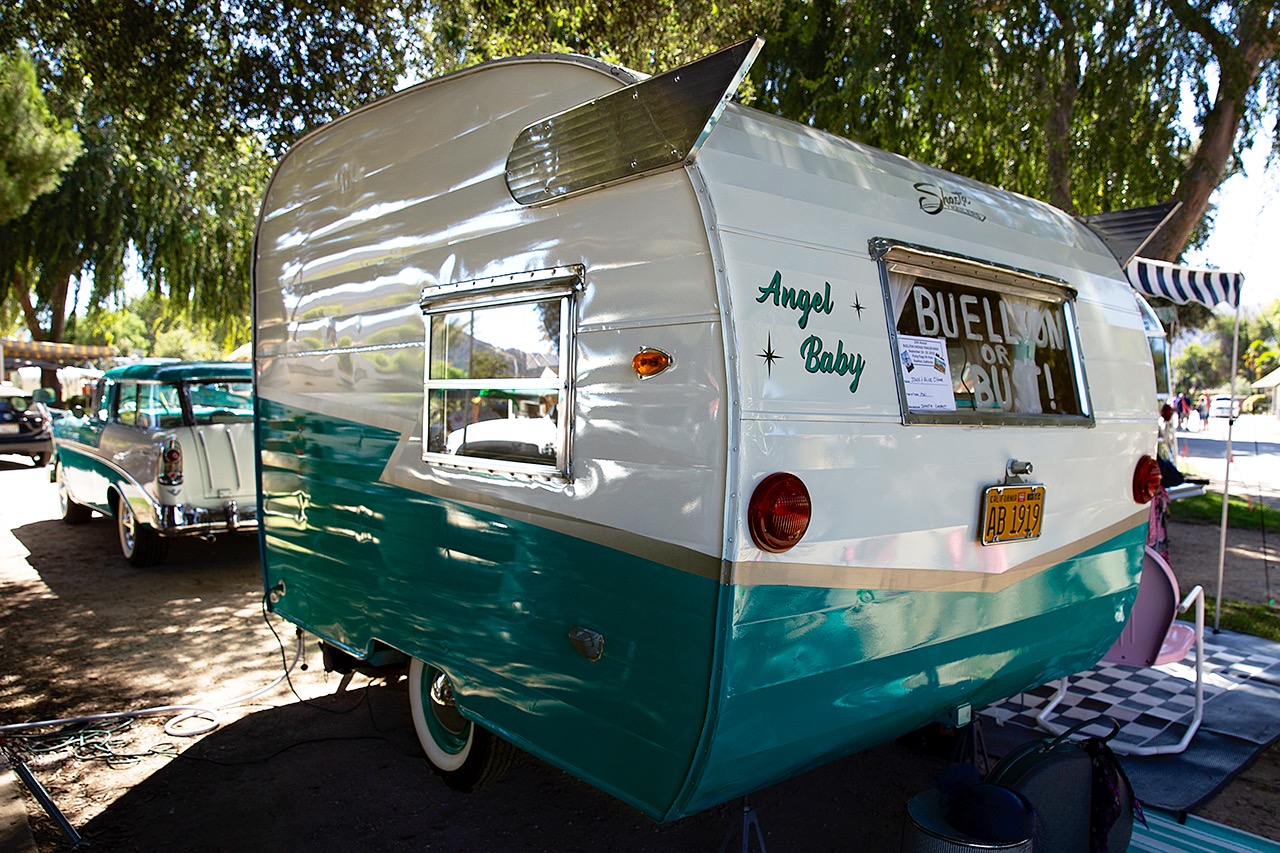 During the 1950s and 1960s, Shasta travel trailers were the best-selling trailers in the U.S. The company started out in 1941 building mobile home trailers for the US Armed Forces. This “Buellton or Bust” ’61 Shasta Compact, Angel Baby, is color matched to its ’56 Chevy Nomad tow vehicle. 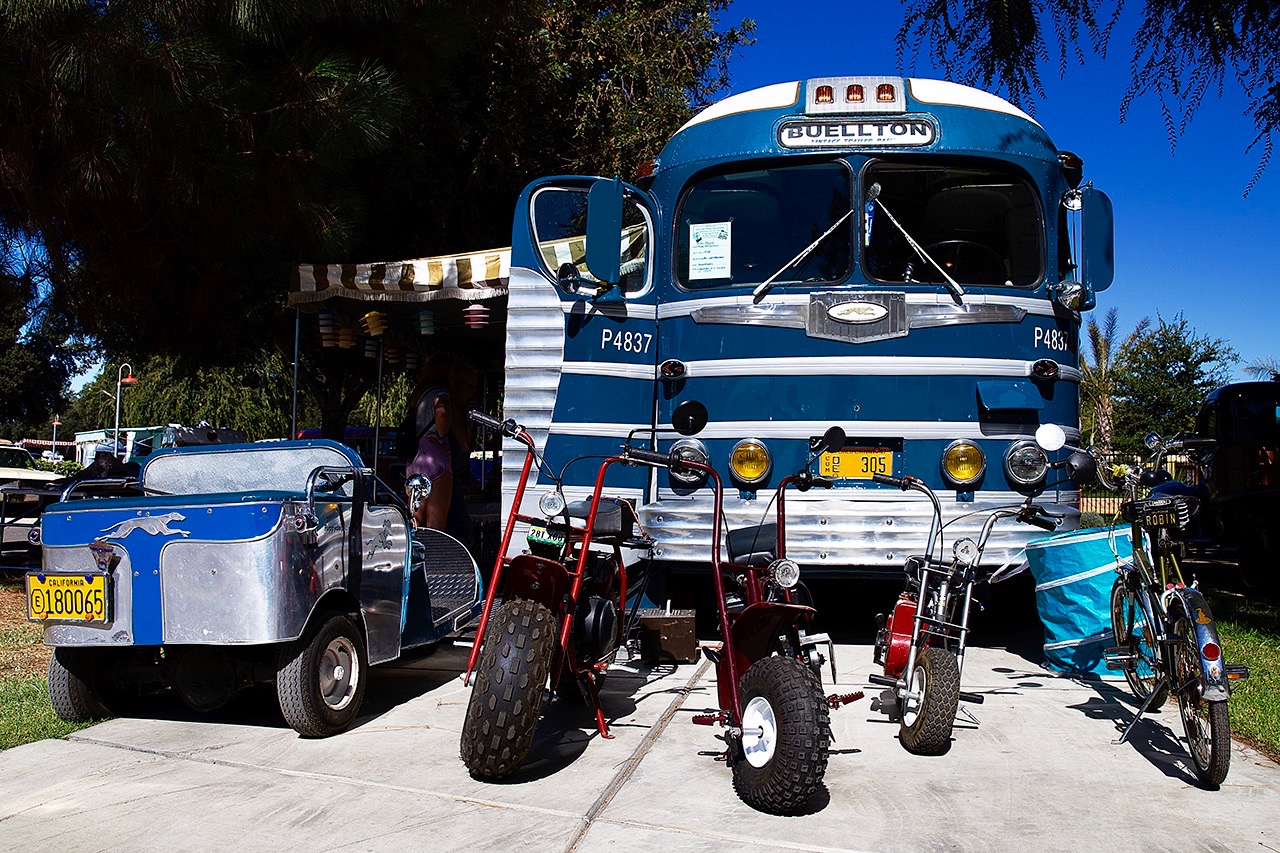 Mike Senzamici and his wife Robin Sager are well known and hard to miss at vintage trailer and car shows in California. Their visibility might have something to do with their sizable ‘49 Greyhound Silverside RV conversion bus. When attending these shows it becomes quickly apparent that caravanning culture includes bringing along lots of your toys to the events. These are just the ones in front of the bus! 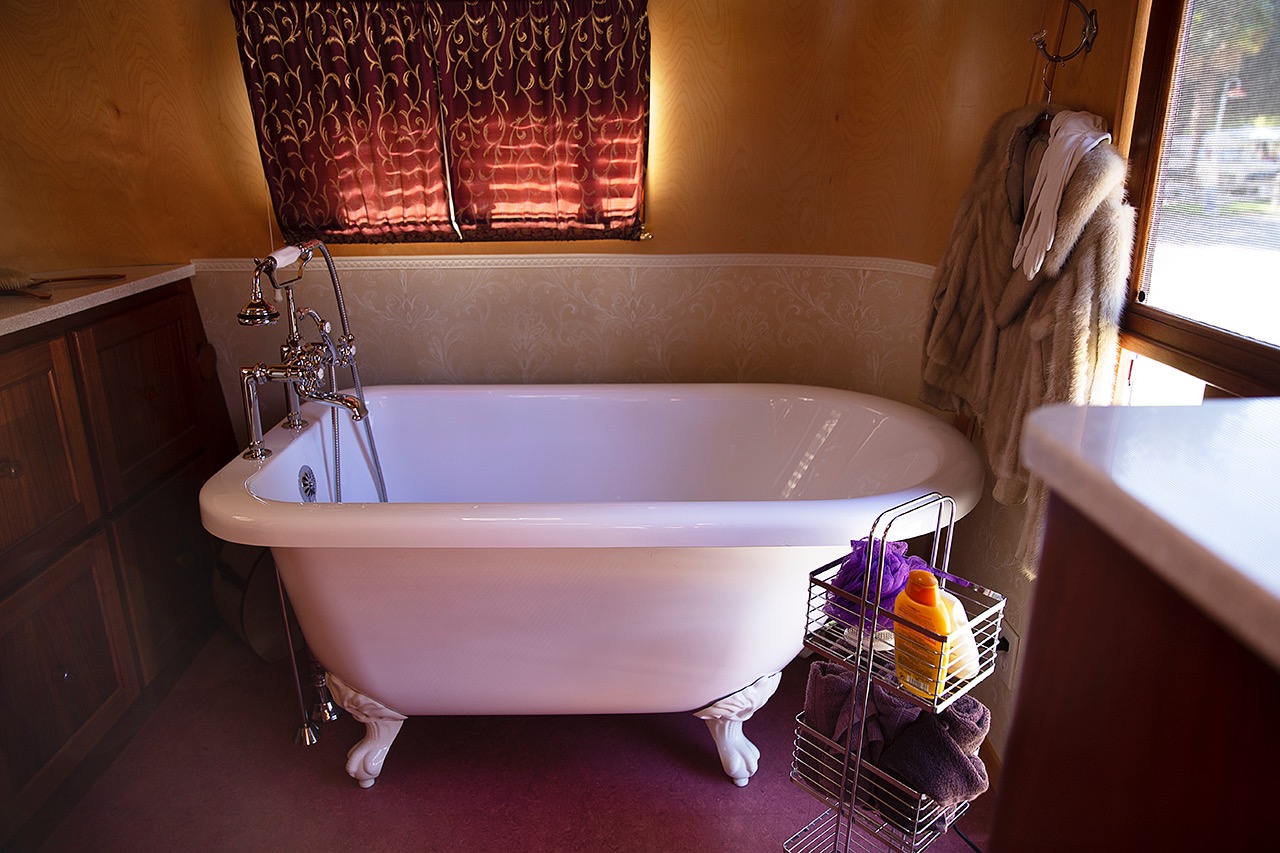 It took me approximately four hours to work my way around Flying Flags RV Resort to cover this year’s Vintage Trailer Bash. It was a beautiful but hot day in Buellton. One of the last shots I took was of this Clawfoot tub that remarkably did not look squeezed-in in the front end of a beautifully restored Mid-century trailer. If only I could have stripped-down and slipped-in!