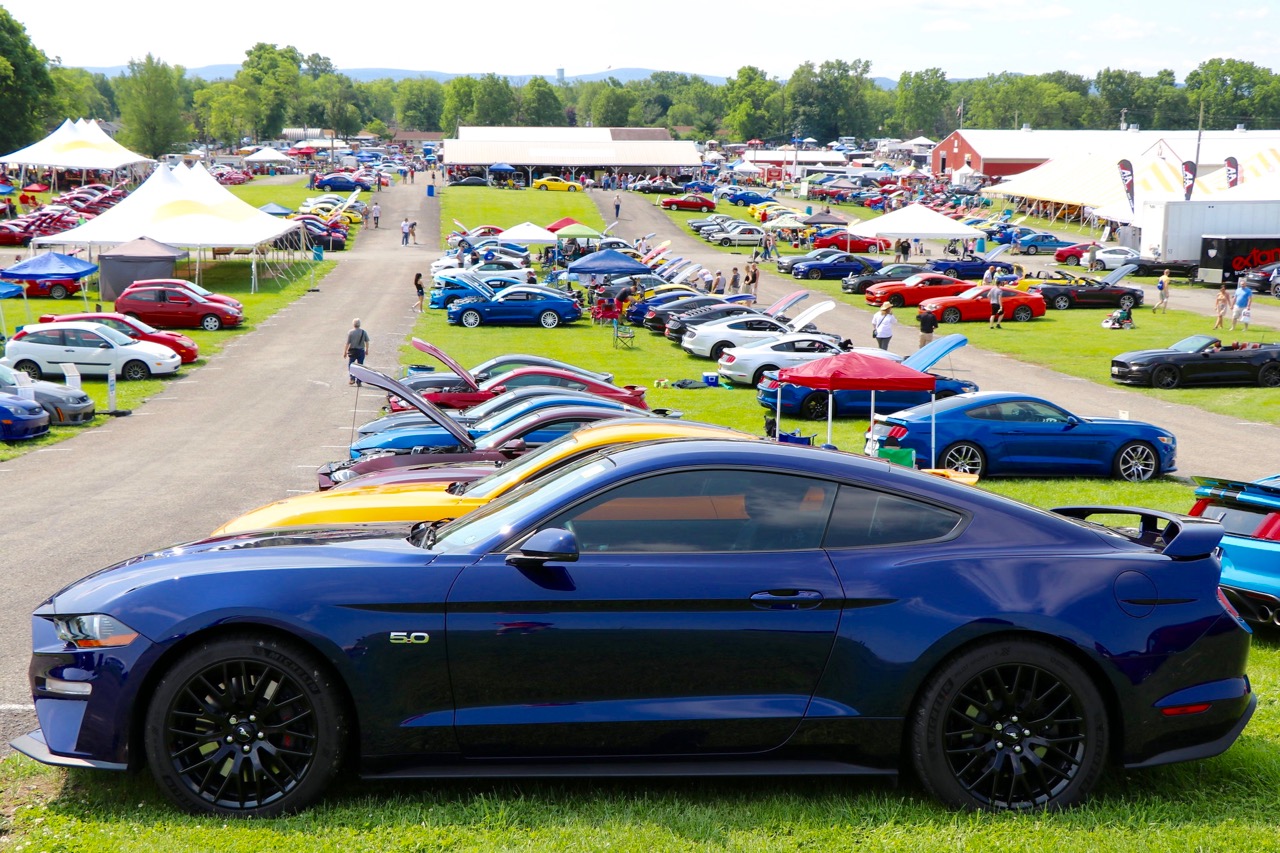 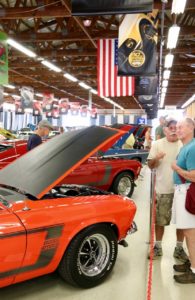 It’s June and summer is beginning to set in. A sure sign of that is the 2019 Carlisle Ford Nationals at the fairgrounds in Carlisle, PA. You may wonder why one attends shows anymore considering the vast wealth of information and items available for sale online, from the comfort of your own home. But come with us and we’ll tell you why, and what you miss out by not attending. Carlisle Photos: Andrew Welsh.

Ford built 214 lightweight Galaxies on Six-Cylinder donors to take on all comers in the Super/Stock drag wars of the musclecar era. Ford took advantage of fiberglass and aluminum components to trim 700 pounds off a full-size Ford. Powered by the top of the line, dual-quad 427/425 and devoid of any creature comforts, it was the Ford racer’s weapon of choice in 1963. Ford also offered dealers Lightweight Conversion Kits to turn production 427 Galaxies into lightweight racecars. Approximately 2,000 kits were sold. This Lightweight Galaxie was in the Car Corral with a posted price of $145,000. Not sure if it found a new home or not? 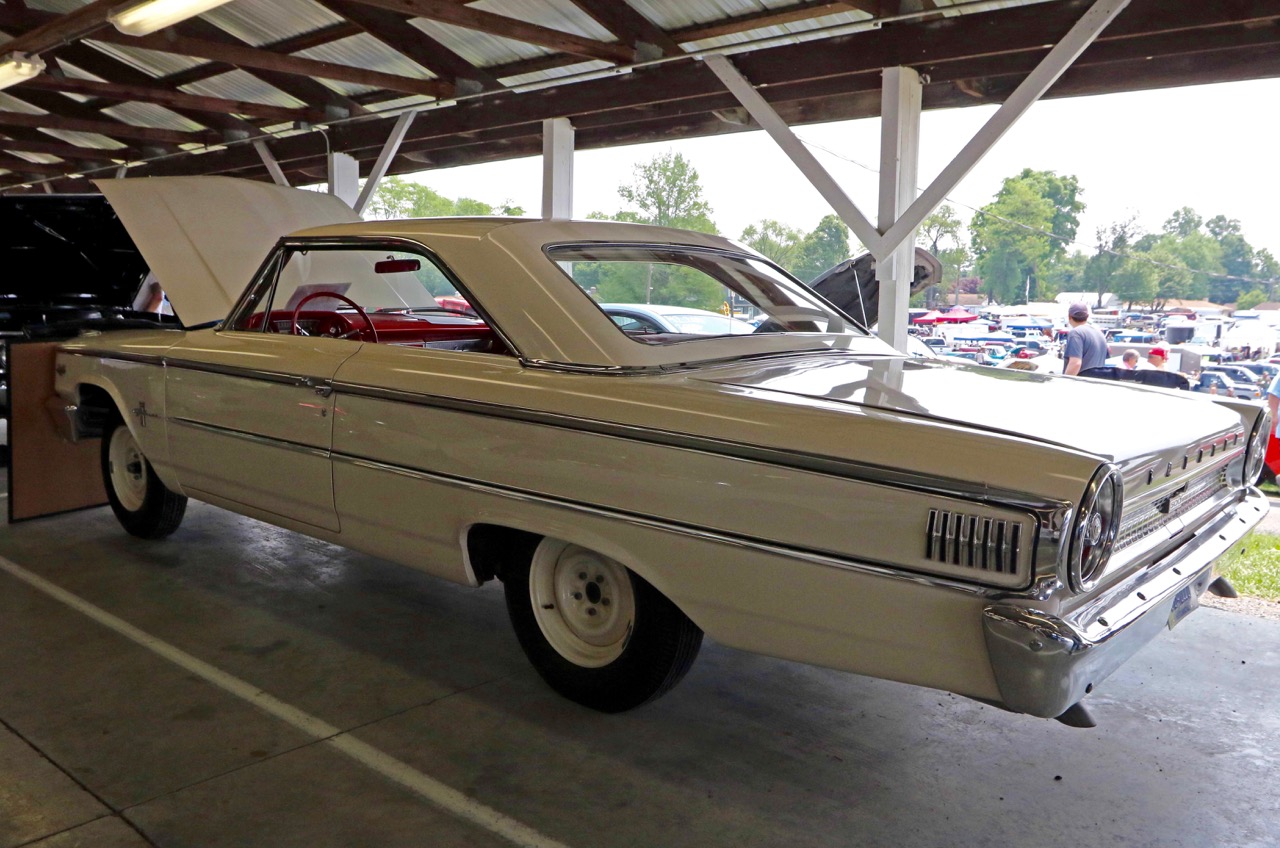 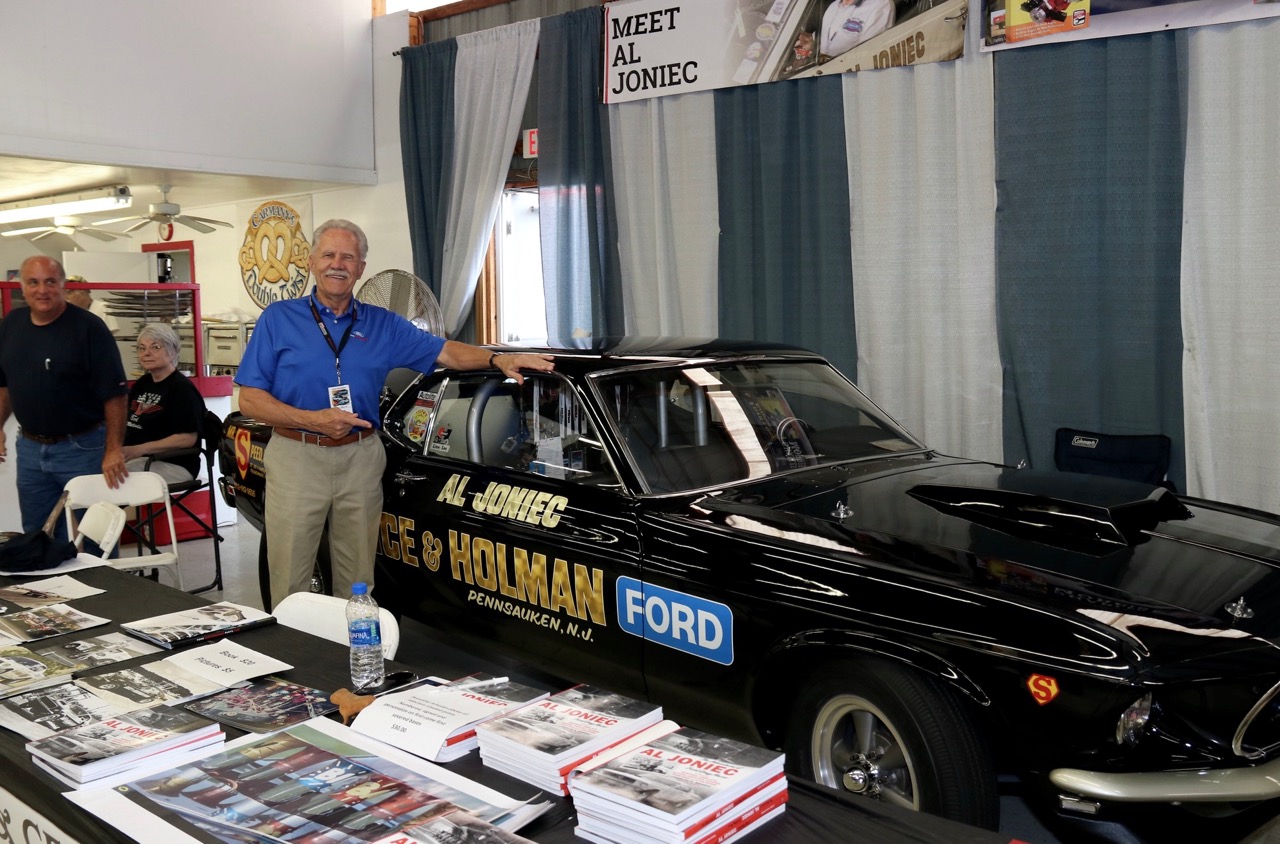 Veteran drag racer, Al Joniec, was a top Ford contender in NHRA Division One, worked as a mechanic in 1963 for Swenson Ford, and made his mark in a lightweight 427 Ford Galaxie. In 1964 he joined the Ford Drag Team. Joniec is probably best known for his wild Batman drag cars. He was a featured guest and signed copies of book just out on his life as a drag racer. Carlisle Photo: Andrew Welsh. 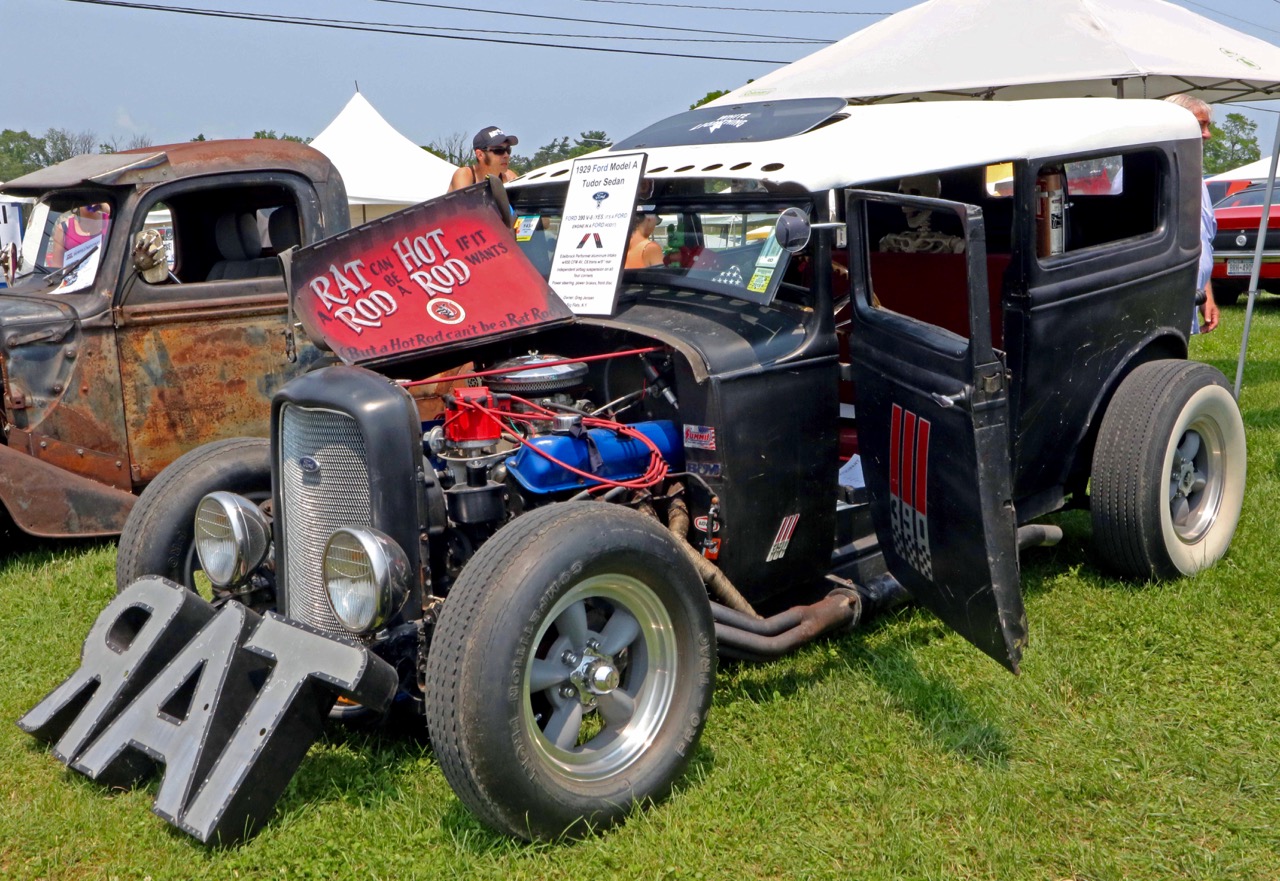 The central theme for a Rat Rod is to duplicate the feel of early hot rods built from whatever was handy. They range from the most primitive of cars up through some very high dollar machines. Greg Jensen’s ‘29 Ford Model A lies somewhere in the middle. Its first impression is offset by the inclusion of a C6 automatic, with power steering and brakes and an independent front suspension. Power comes from a 390-cubic-inch FE big-block Ford with headers and an aluminum intake. 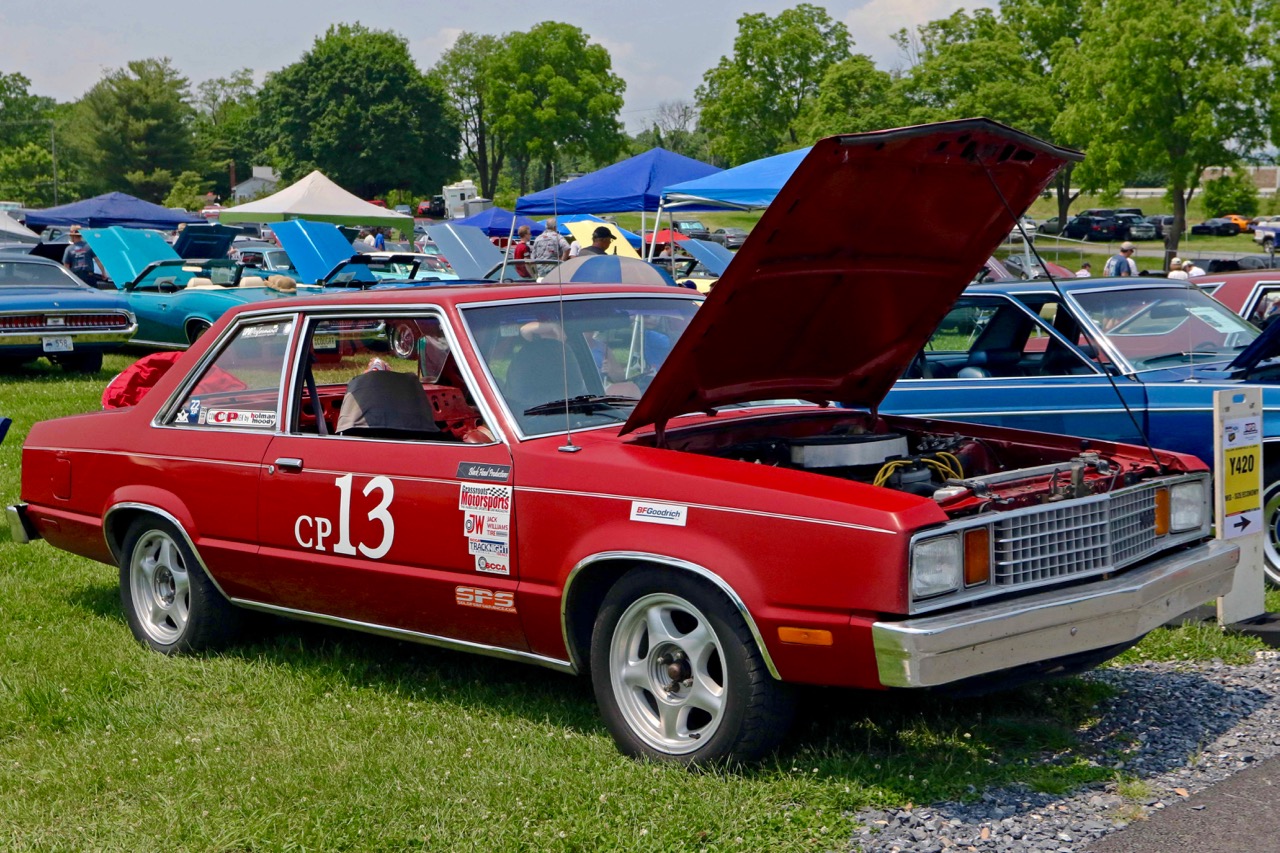 Tina & Mike Cunningham’s Ford Fairmont may be the only such car competing in open track events and autocrosses. It’s rather work-a-day appearance hides a very serious racecar with numerous suspension, engine and drivetrain mods. You learn that very quickly when he fires it up and the ground seems to shake. It is completely owner-built, and Mike Cunningham points out there aren’t any components on the car that he hasn’t had apart at least twice! 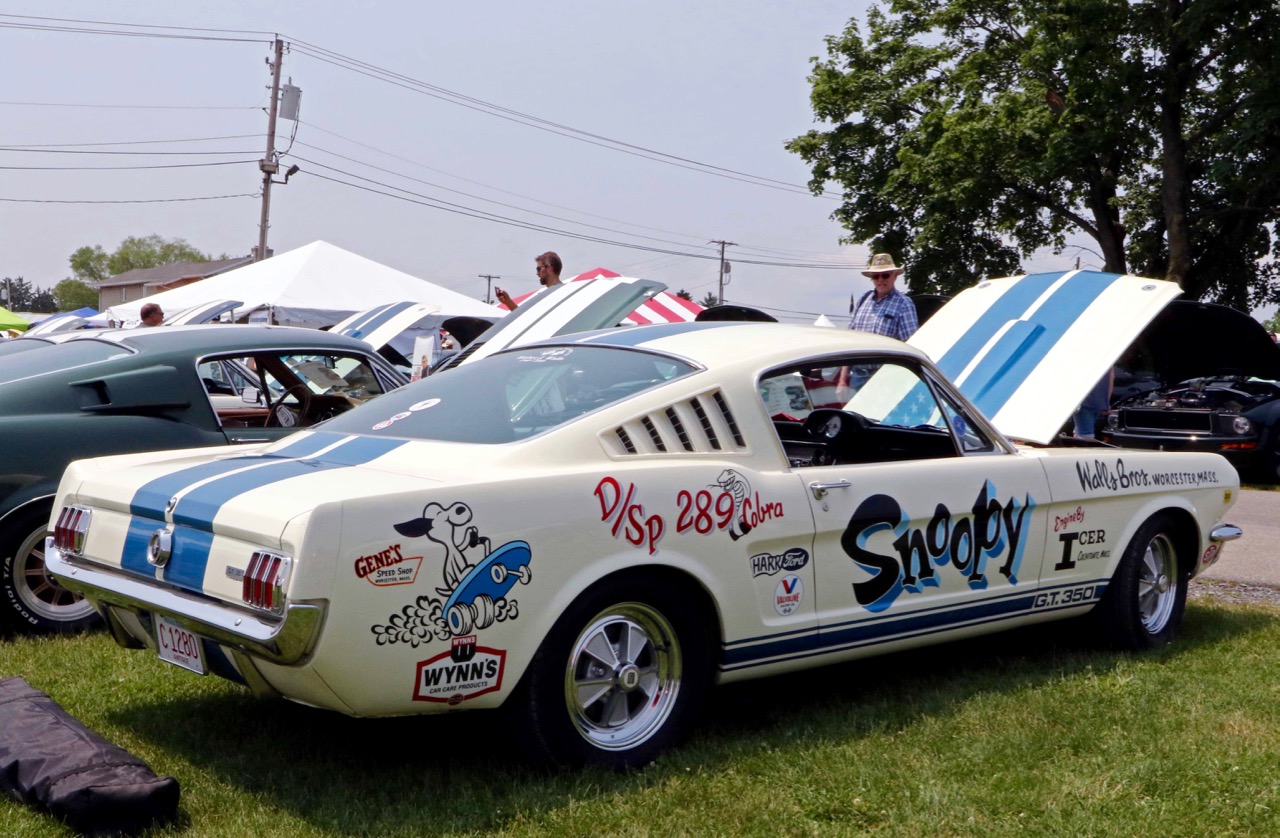 Shelby American asked Harr Ford in Worchester, MA if they could locate someone familiar with racing a Hi-Po 289 to campaign a then new GT350. They identified the Walls brothers who had been racing a Hi-Po Fairlane. Today the car is still within its original family, owned by brothers Robert & Steve Walls. Showing 42,000 original miles, the Mustang is a well-preserved example of an early GT350. It was shown in its 1966 race livery. 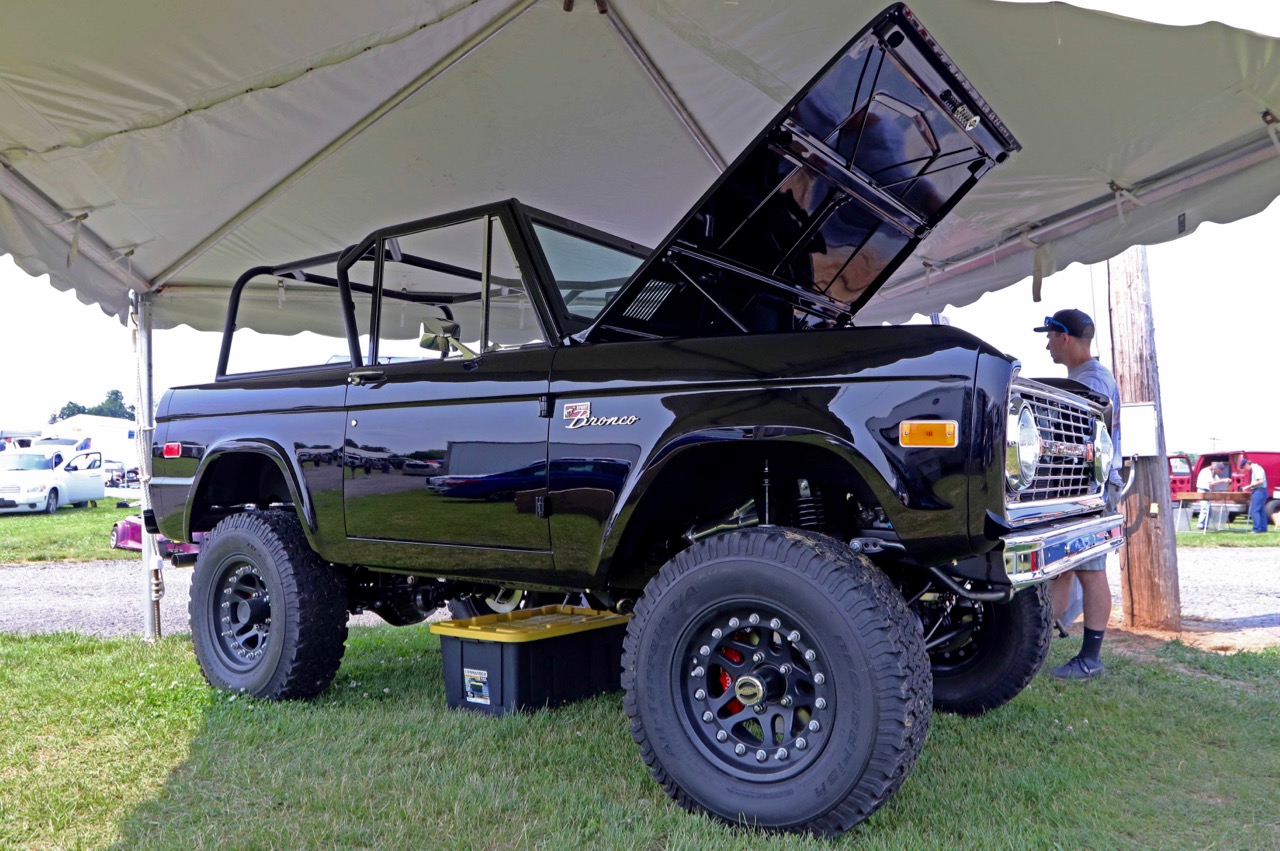 If you’ve checked prices, you probably have realized that early Ford Broncos have been discovered. Finding a good one has become a challenge. But never fear, the aftermarket has stepped up. Here we have a Kincer Chassis from Krawlers Edge, http://www.krawlersedge.com/ crowned with a complete reproduction body from Dennis Carpenter,  https://www.dennis-carpenter.com/ You can order both in whatever configuration fits your vision, from stock to over-the-top custom. This one is fitted with a lift kit and aggressive rolling stock. Between the frame rails is a Coyote crate motor.

Carlisle celebrated 50 years of the Boss Mustang this year. Close to Gate 2, Bill Collins Collector Fords, http://www.bcfords.com/ showed this well presented, nicely optioned ‘70 Boss 302 for a tick under $90,000. When we saw that the car originally stickered at $4,100, it got us thinking about how much of the current price could be chalked up to inflation and how much was appreciation due to supply and demand. A quick check of the Internet revealed that the original price inflated to something like $27,000 today, leaving $63,000 in appreciation based on some very crude calculations. 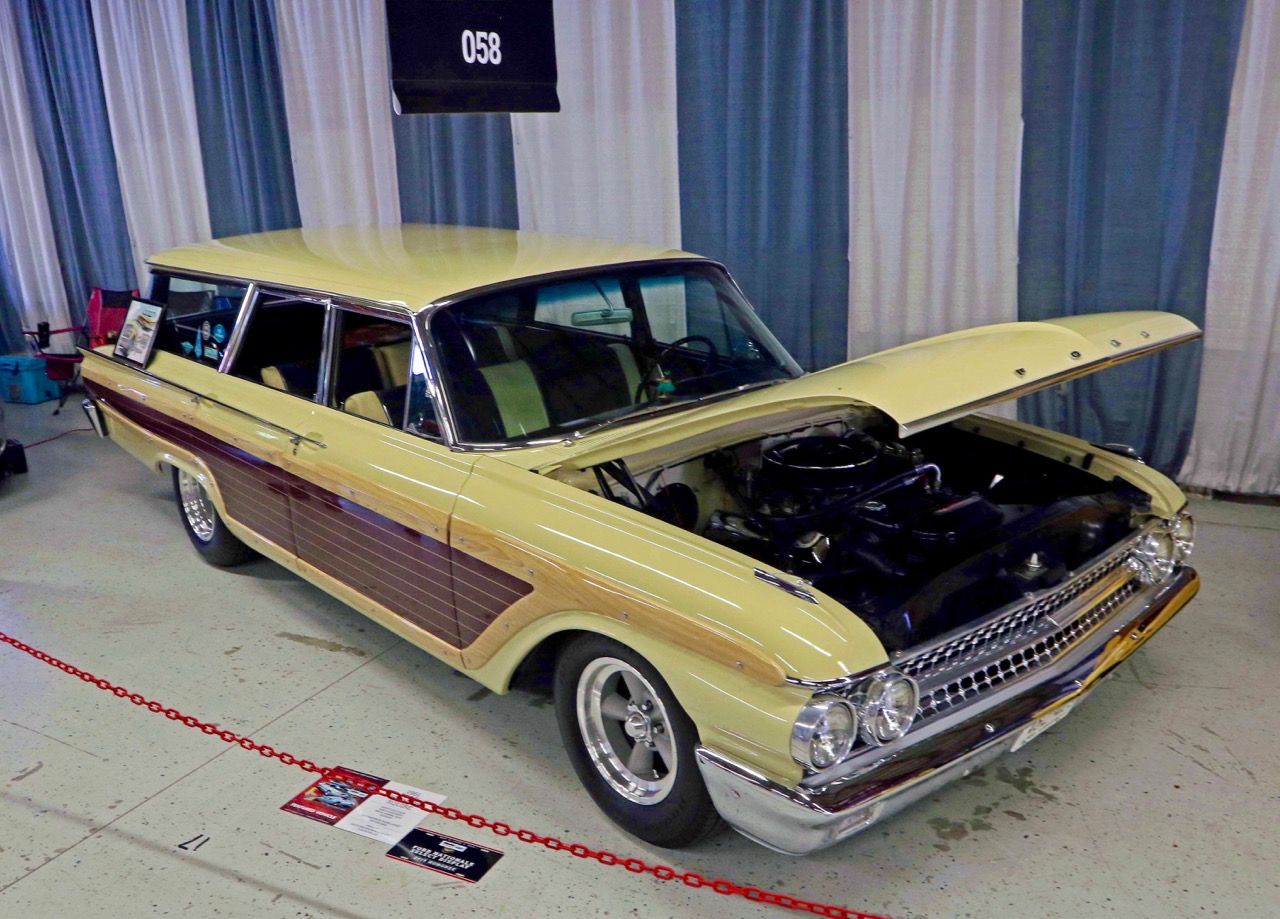 Since 2015 Carlisle has recognized a group of cars that they feel best represent the Ford brand. They are an eclectic lot that showcases the breadth of Ford’s offerings over time and around the world. Each car selected is issued a number in sequence and shown in a central building. It’s hard to go wrong selecting any of these cars for inclusion here, but we chose Brenda & Zach Straits’ ‘61 Country Squire. Flawless is an overused word when describing show cars but it fits in this instance. Details abounded like modern air conditioning, a Ford FE big-block under hood and surf decals on the back window. 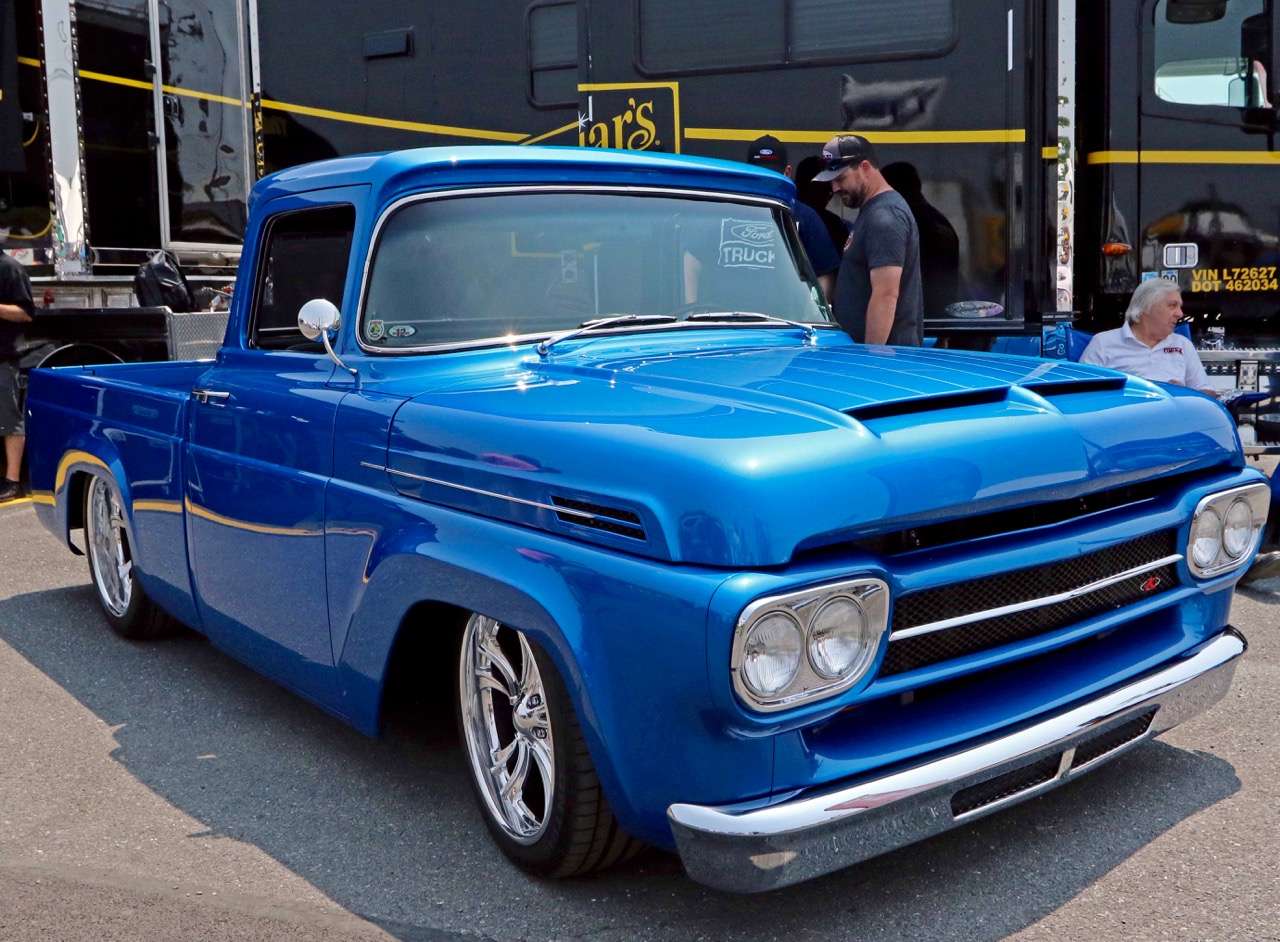 There is a little of everything at the Ford Nationals from owner-built garage “projects” to full-on extravagances. This is an example of the far end of that scale. Dan Bouchard’s ‘58 Ford pickup hardly has a component untouched in its creation. Based on a rendering by automotive stylist Eric Brockmeyer, http://www.brockmeyerdesign.com/and the execution was carried out by Korek Designs, https://www.facebook.com/Korek-Designs-173456062730992/ Under its hood is a supercharged Ford Coyote backed by a six-speed 6R80 automatic. Chassis & suspension are by Art Morrison. 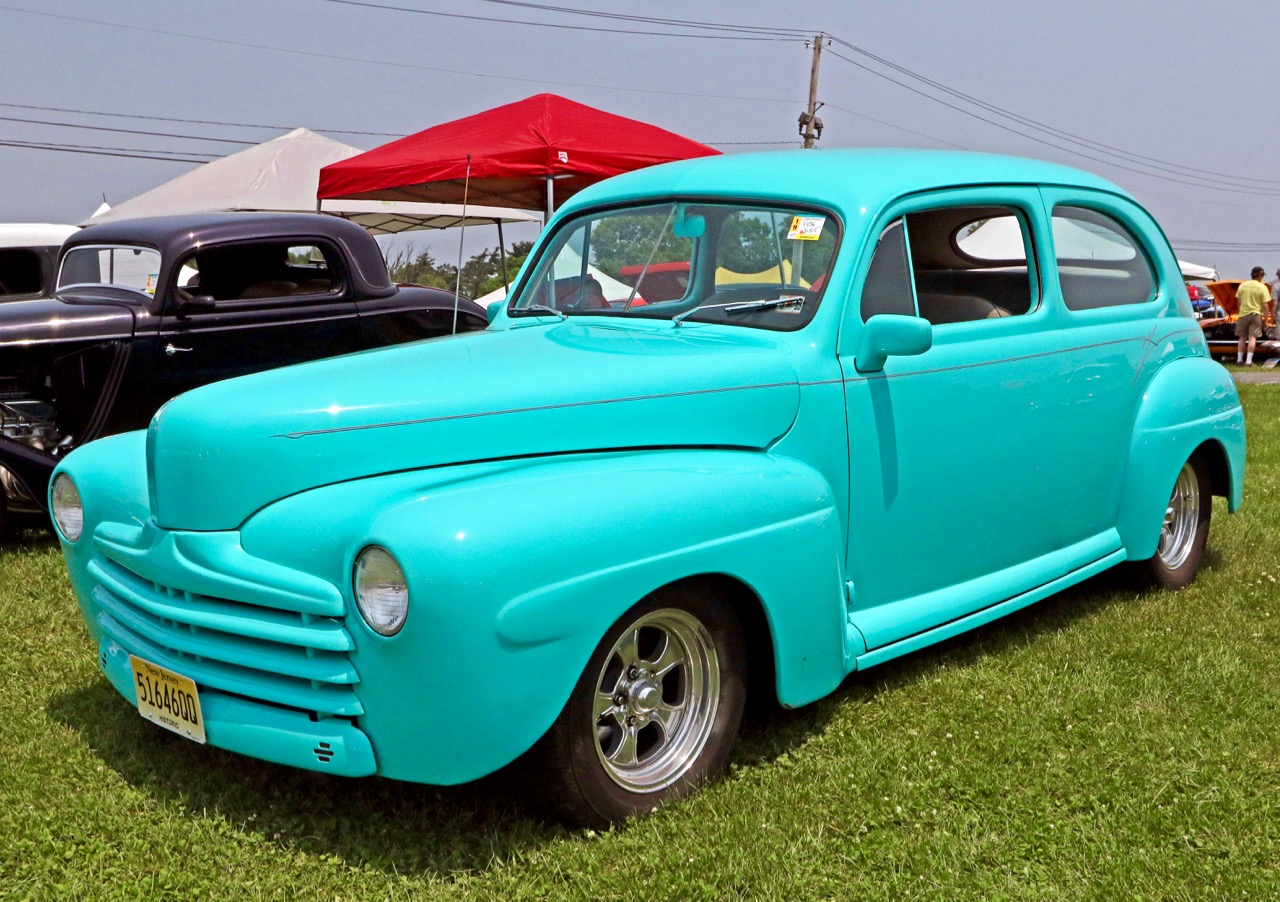 Terry & Joseph Lizzio’s Fat Fender ‘47 Ford is done in the 1980s idiom, with monochromatic paint, dechroming and slim pinstripes. Note how the turn signals were cut into the shortened front bumper, and the “flag” mirrors on the doors. It is as if the whole intent of the modifications was to remove anything that would detract from the car’s basic lines. We found the Lizzio’s nickname for the car appropriate, The Jelly Bean Express. 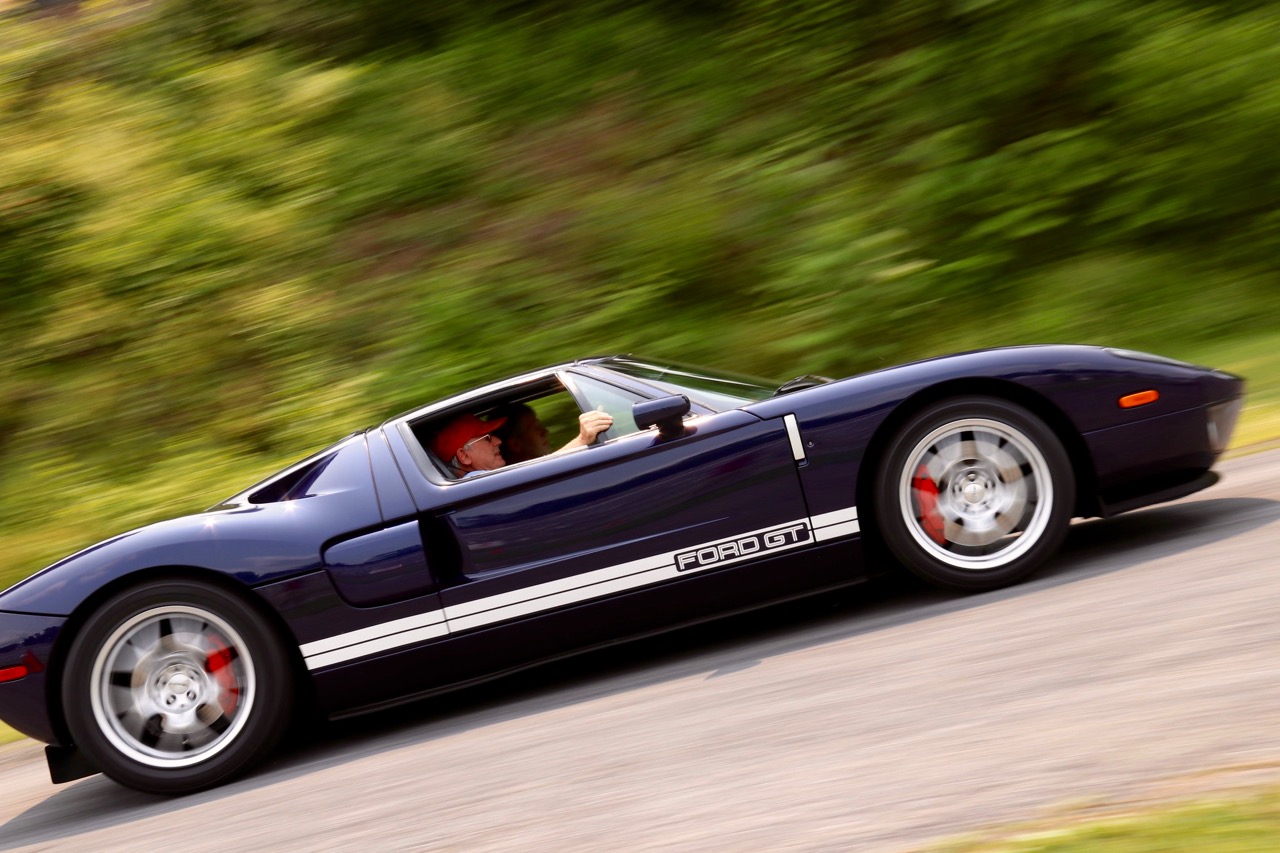 So there you have it. On a single 82-acre site, you can check out Ford GTs, buy complete cars, see the unusual and shop for everything from the whimsical to the latest trends in the hobby to that one tiny little unobtainable part you need to complete your project. In addition, you get to pick the brains of countless enthusiasts who have been there and done that. There are far worse ways to spend a sunny Summer day! Ford GT Photo: Andrew Welsh.