While Alfa’s sporty Stelvio may be late to the SUV party, its lively performance and spirited handling has huge appeal, blogs Road Test Editor Howard Walker. 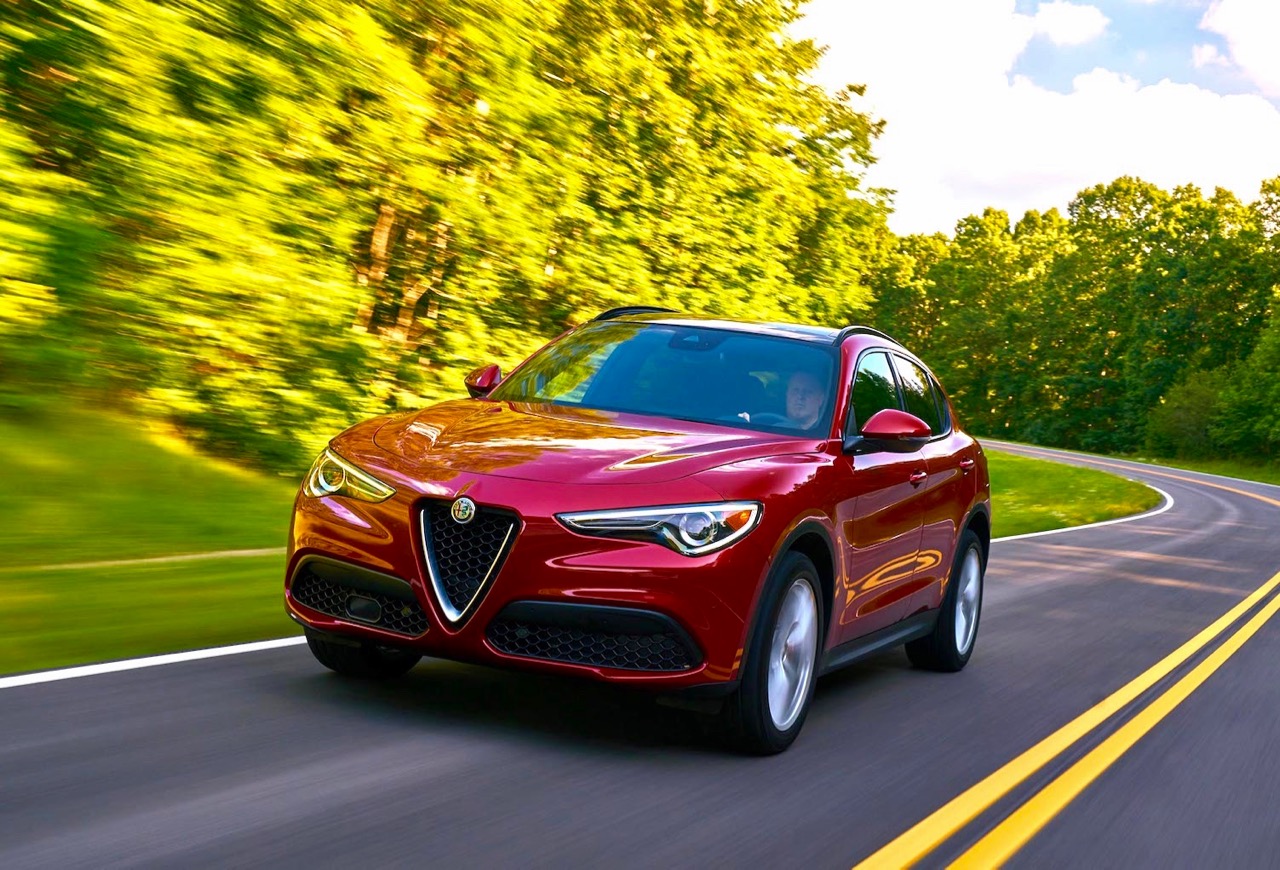 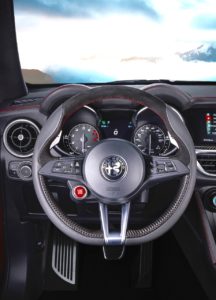 Who doesn’t adore Italy? All that pizza and pasta, the vino Chianti, the gelato. Ah, the gelato. I could live on Stracciatella. And all those swanky fashionista labels. Gucci and Armani, Fendi and Missoni. Want to sound more interesting in life? Just add an “i” to the end of your name. Walkeri? Maybe not!

A huge part of the appeal of owning a new Alfa Romeo has to be its Italian-ness. Just mouthing the words Alfa Rom-ey-oh – ideally with a shrug of the shoulders – makes you sound like a cast member of the Godfather. That said, while Alfa’s recently-launched Giulia sports sedan has received more outpourings of adoration than Oprah at the Golden Globes – it was just voted 2018 Motor Trend Car of the Year – so far it has been something of a sales dud. 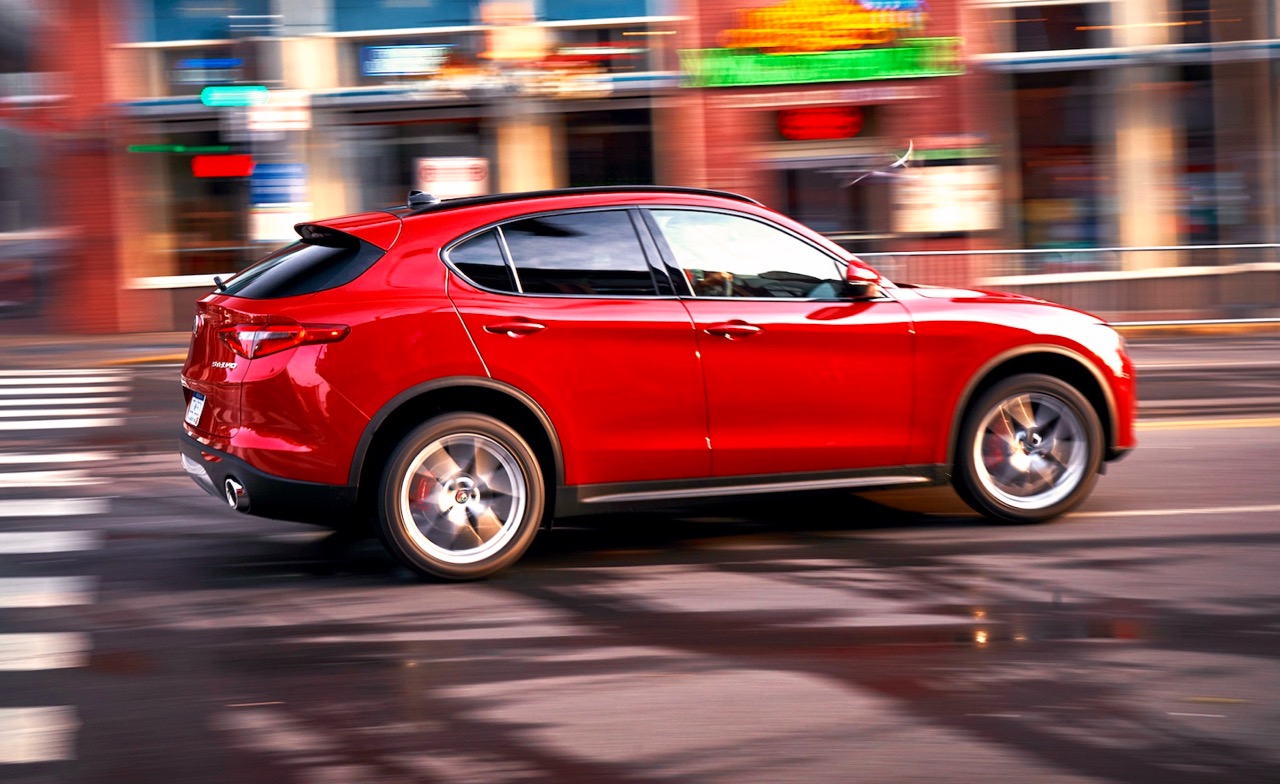 How come? It’s a four-door sedan, and as we all know, right now we Americans are head-over-heels in love with load-lugging, ride-’em-cowboy SUVs. So the timing should be just about perfect for the debut of Alfa’s first SUV, the Stelvio, named after the infamous Italian mountain pass that soars through 48 pinch-tight hairpin turns to its summit 9,000 feet above sea level.

And this new Stelvio is truly bellissimo, with its oh-so-appealing cocktail of sling-shot performance and athletic handling. It’s seductively priced too, kicking off at just $42,990 and maxing out at around $54,000 for a loaded Stelvio Ti Sport.

Yes, there are more rivals in the Stelvio’s class than there are cooked meats at the Publix deli – everything from Audi’s Q5, to Merc’s GLC, to BMW’s X3, to Jaguar’s F-Pace to Volvo’s XC60. But remember, the Stelvio is Italian. And a great value, generally undercutting the opposition by thousands of bucks. 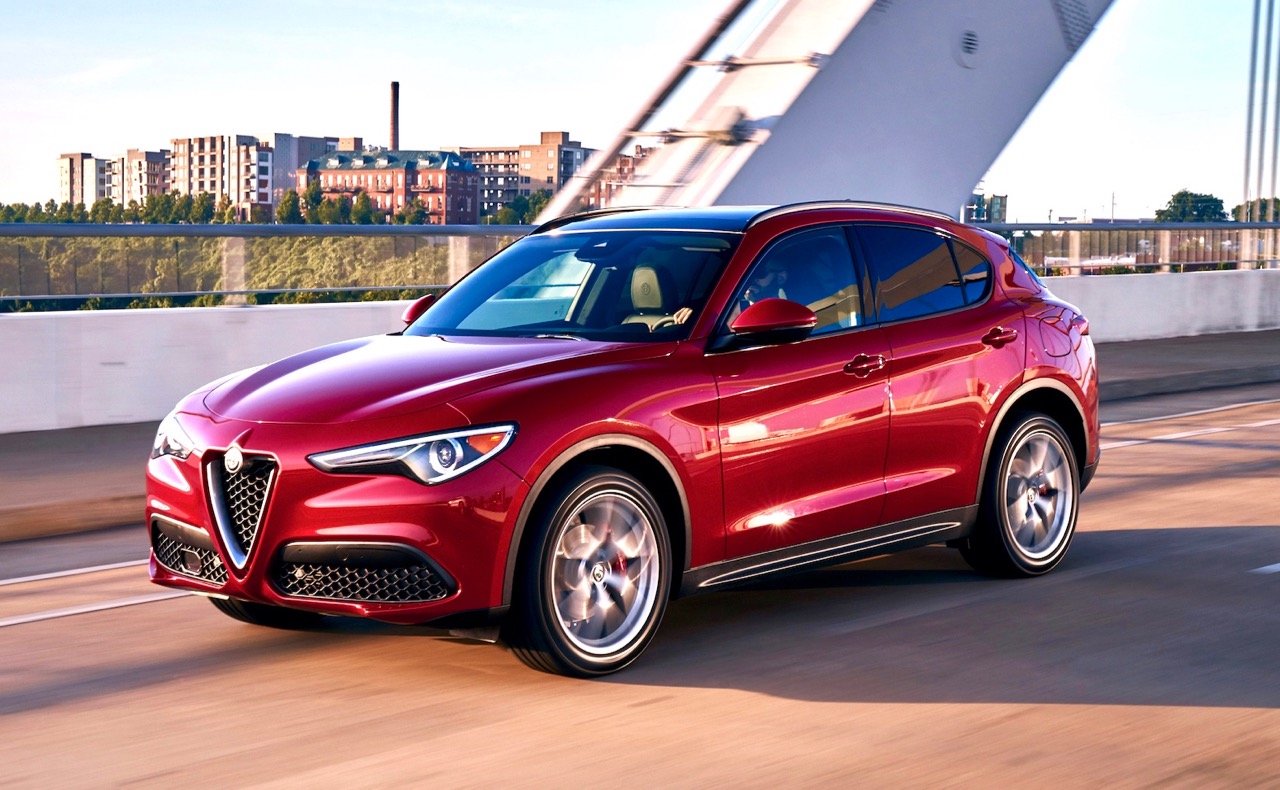 For an SUV, it’s also extremely pretty. That trademark shield-shaped grille – just like the one on Dustin Hoffman’s Alfa Spider in The Graduate – those swept-back headlights ringed with bright-white LEDs, those air-gulping intakes. It’s a face as striking as Isabella Rossellini’s!

Sizewise, it’s pretty much identical to Audi’s Q5. So not too big, not too small. Inside there’s space for four adults, though knee room in the back is pretty tight. And with that curvy rear end and angled tailgate, luggage space is also on the compact side. There’s just 18.5 cubic feet of stowage space with the 40/20/40-split folding rear seat in place. 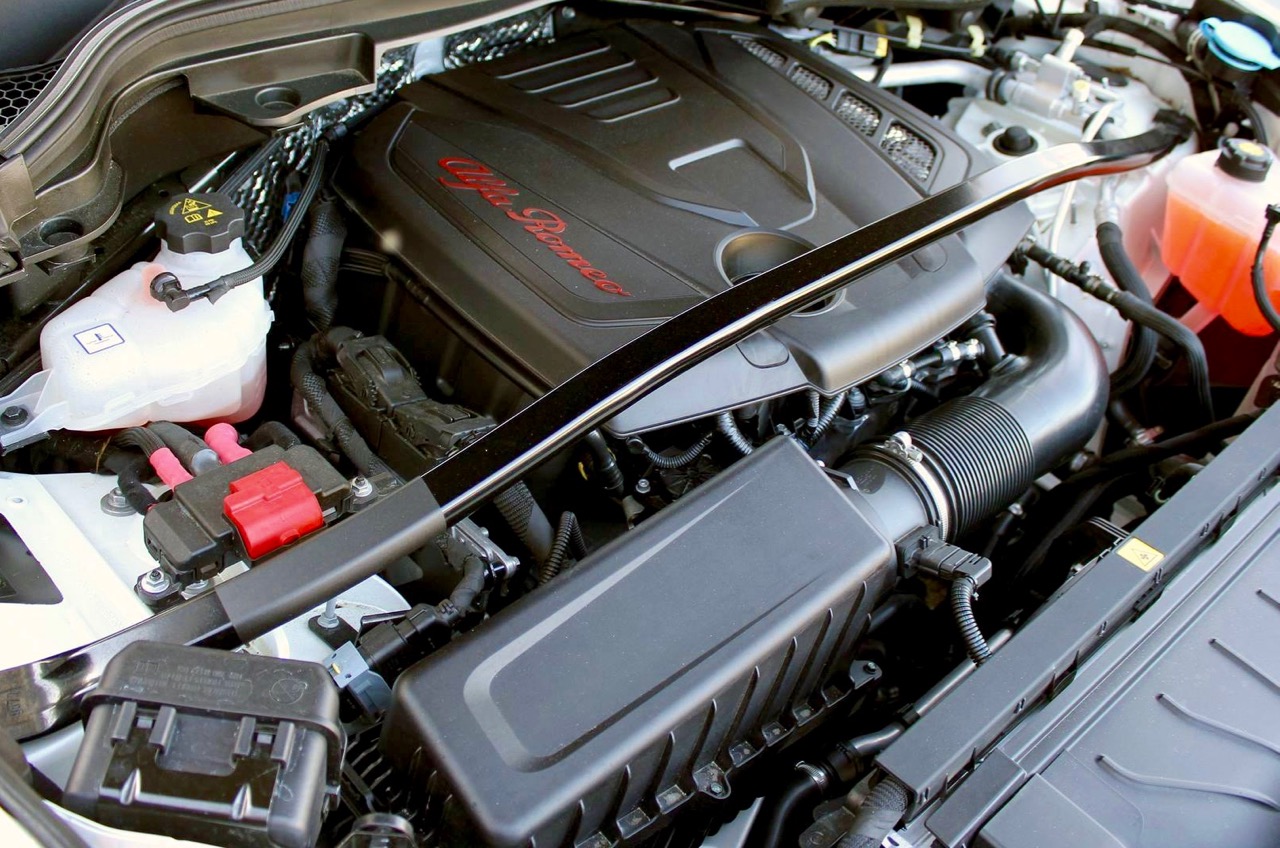 Mechanically, the Stelvio shares its greasy bits with the gushed-over Giulia sedan. Until the arrival of the fire-breathing 507-horse Stelvio Quadrifoglio version this Spring, the only engine on offer right now is a 2.0-liter turbo-four mated to an eight-speed paddle-shift auto. As in the Giulia, it’s a terrific motor punching out 280-horsepower and 306 pound-feet of torque. Red light turns to green and the Stelvio will rush to 60 mph in just 5.4 seconds, making it by far the quickest in its class. 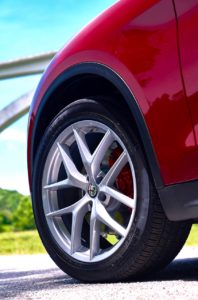 And it feels Usain Bolt-speedy thanks to the SUV’s almost over-enthusiastic response off the line. This is perfect when you’re in the mood for a fast take-off, but it verges on the annoying when you’re moving up in the Starbucks drive-thru. This hair-trigger response also applies to the brakes at low-speed. Stop-start commuter traffic is the worst – just a little pressure on the pedal will likely jettison the contents of the aforementioned Starbucks into the rear seat!

But point the Stelvio’s distinctive snout along a twisty back road and all the planets align. Here it simply doesn’t feel like an SUV, more a tall sports sedan. The car feels light and agile, nimble and fun. Sugared-up two-year-olds don’t have this much zest. The car’s steering is simply magical. Yes, initially it feels a tad light and over-boosted, but you quickly appreciate the response and delicacy of the system. The feedback you get through your fingers is remarkable.

Find a twisty back road – difficult, I know, here in the Sunshine State – and the Stelvio spears through the curves like it’s running on invisible rails. Standard rear-biased all-wheel drive just adds to the confidence as you punch the car through the turns. Even over the lumpiest blacktop, the car rides smoothly and soaks up the nastiest of potholes, while those big Brembo brakes are sensational at scrubbing off speed. 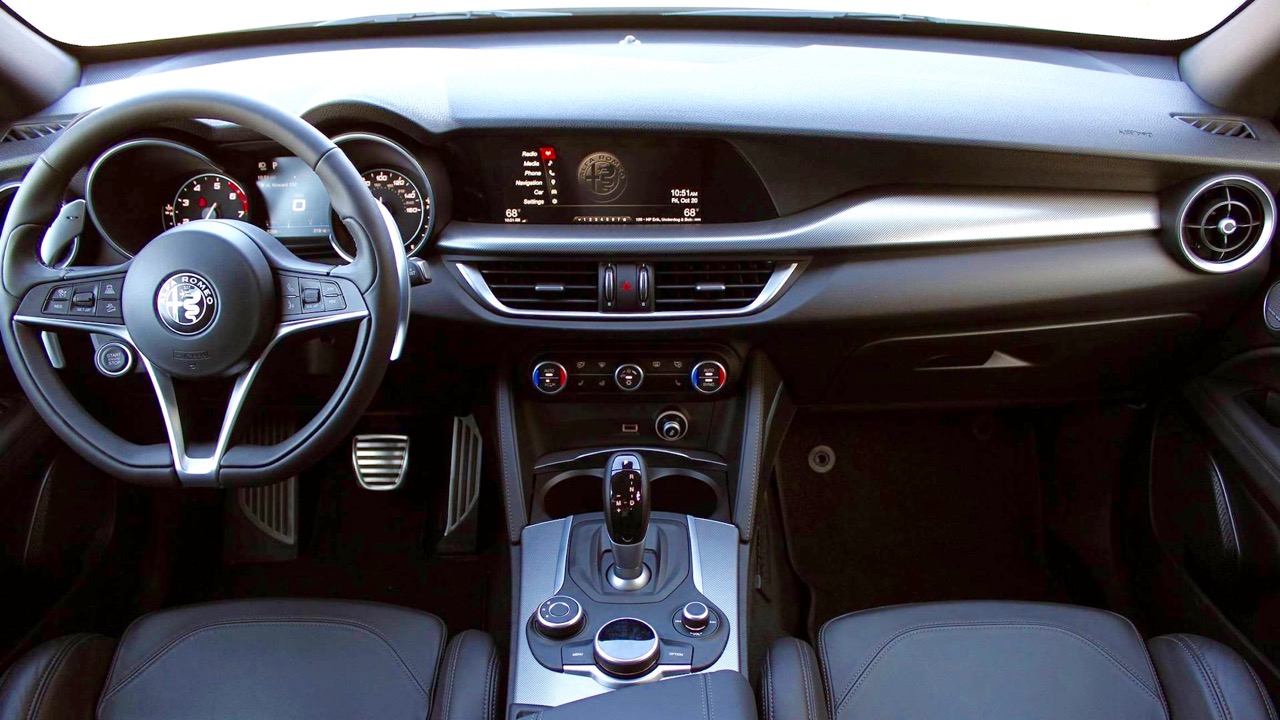 But, but…being Italian there are the odd quirks that will have you slapping your forehead in frustration. Like the automatic Stop/Start that occasionally likes to take its sweet time to fire the engine once you’ve taken your foot off the brake. That and the ridiculously small infotainment screen and the ridiculously large paddle shifters. Dumbo has smaller ears than these. The beeping from the over-sensitive parking assist system will also drive you nuts, as will the warning from the lane-keeping assist, which sounds just like Dumbo breaking wind beneath the center console! 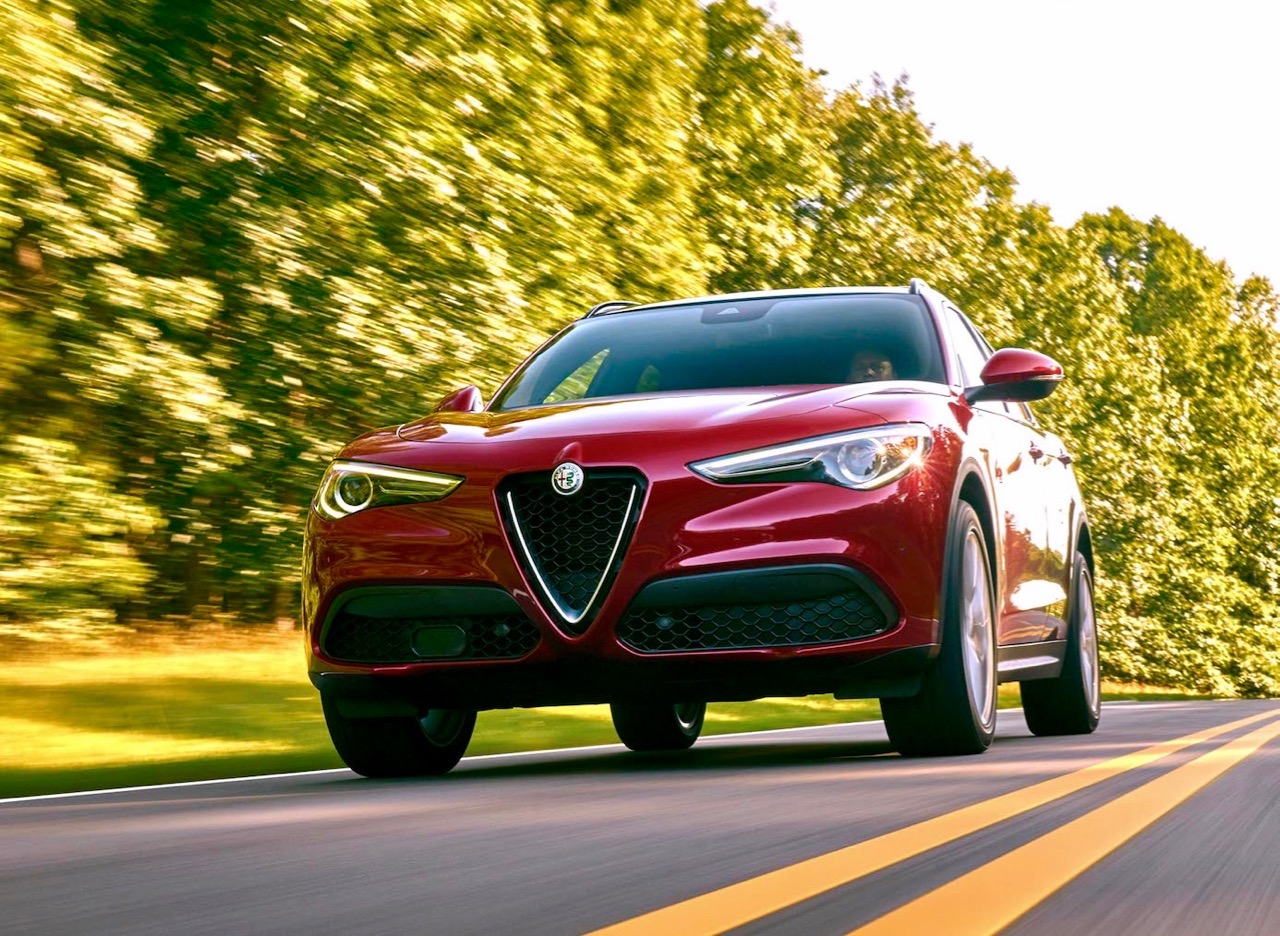 But quirks aside, the Stelvio has huge appeal. It’s a joy to drive, easy to live with, practical and it’ll allow you to throw a few Italian phrases into everyday conversation. Ciao Bella!

For more information about the Stelvio, please visit https://www.alfaromeousa.com/cars/alfaromeo-stelvio