Skip to content
In 1967, Ford’s street-muscle standard-bearer was the midsize Fairlane packed with 425 horsepower. Here’s a rare XL-trim hardtop that’s ready to rumble. 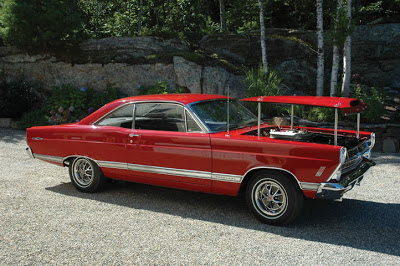 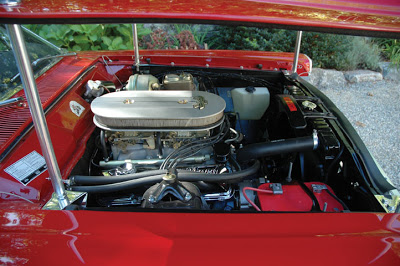 Traditional 1960s Supercars (now known as Muscle Cars), mid-size models with maximum power, were packed with as much horsepower as the carmakers could come up with. It was the era of Street Hemis, big-block Chevys, tri-power GTOs and niche market muscle from Baldwin-Motion, Nickey, Yenko and, of course, Shelby American. Whereas GM chose the 112-inch wheelbase Chevy SS, Pontiac GTO, Olds 442 and Buick GS-455, Ford put its Supercar
badging on the 116-inch Fairlane, packed with a choice of single-four-barrel 410-horsepower
or dual-quad 425 horsepower R-Code 427 wedges. 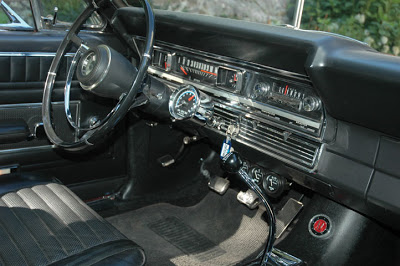 Ford was having an incredible year in 1967 on the motorsports scene with its GT40, Shelby Cobra and Mustang road racecars and drag racing 427 Super/Stock Fairlanes. In order to run in Super/Stock, Ford had to offer 427 Fairlanes to the public. And they did. Some of the top
drag racers, like Ed Terry, Bill Ireland, Don McCain, Hubert Platt and Jerry Harvey
campaigned hard-charging Super/Stock Fairlanes. 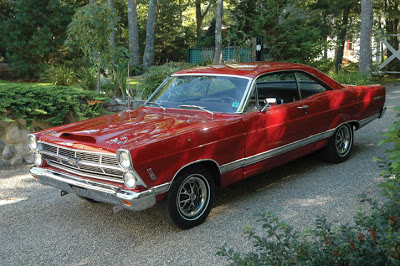 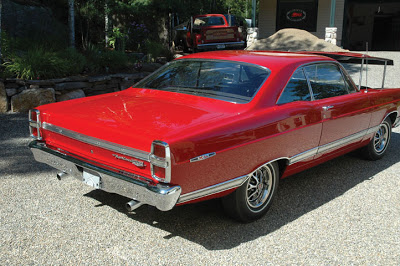 The 427 Fairlane featured here has an extensive drag racing history and just 2,877 miles on its odometer. It’s powered by a period and date-correct replacement R-Code 427/425
hooked up to a four-speed “top-loader.” Finished in Candy Apple Red with a black interior,
it was restored two years ago and has been stored in a climate-controlled facility. It will cross the block at the Auctions America Auburn Spring auction, May 9-11, 2013.