Skip to content
‘The squirrel survived to chase another nut thanks to the Subaru WRX STI’,
blogs Dan Scanlan. 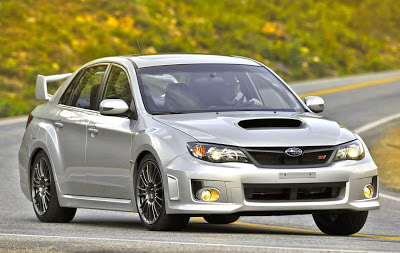 Darting in front as I accelerated down a narrow road, then zigzagging as he freaked at the sight of my turbocharged wide-body sedan coming at him, I nudged the steering to swerve as I tapped the Brembo brakes. Result: No gray fur in its wide lower air intake as the all-wheel-drive sedan responded quickly to driver input and swerved easily! That’s just some of the fun I had with the WRX STI Limited Edition. Let’s rally around a car I used to call “Rex the Wonder Subaru” and see how it flies.

Subaru used to flog its WRX STI racecars in the World Rally Championship to good effect – it won Manufacturers’ and Drivers’ titles. Then in 2004, the street-legal WRX STI came to the U.S. STI (Subaru Tecnica International), the high-performance and racing arm of Fuji Heavy Industries, which makes Subarus. For 2013, the street WRX STI carries on with the sleeker redesign offered in 2008 on the Impreza compact platform, with slight tweaks to the front bumper. The biggest change from the stock Impreza is the wide body design. Glaring chrome-rimmed HID headlights flank a basic Subaru grille, with black plastic mesh hosting the red STI badge. Fog lights in side vents above a lower air dam flank its lower air intake. 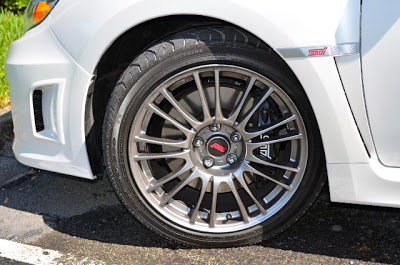 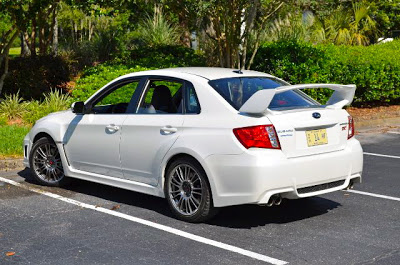 There’s a rear aero underbody fascia with quad exhaust tips, and you can’t miss the tall tail spoiler, which doesn’t really mess with rearward vision. The WRX 5-door hatchback is a nicer shape in my opinion. Sport compact tuners have copied what was once a rare boy racer
look, so no one gave our STI a second look. 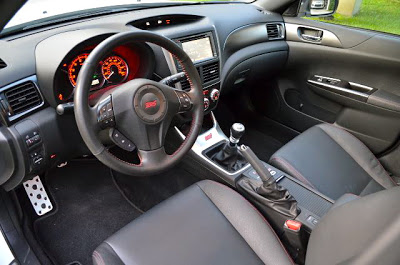 Since the STI is based on a garden variety Impreza, you get a basic hard black plastic design with some upgrades, some due to its “Limited Edition” configuration.  The leather-clad high-back sports bucket seats with embroidered STI logos are limited edition spec with double red stitching. A three-spoke tilt and telescope leather-wrapped steering wheel with red stitching has stereo, cruise, and Bluetooth/voice command buttons. A gauge package with black-faced, orange-needled 160-mph speedometer, 8,000-rpm tachometer and gas and temperature gauges is appreciated. Aluminum pedals and a dead pedal add a racing touch underfoot,
while all gauges and buttons glow red at night. 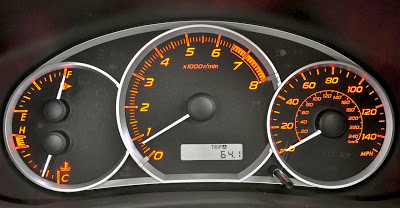 Dash center, there’s a 6.1-inch LCD touchscreen for navigation with XM NavTraffic, plus a six-speaker AM-FM-CD-XM Satellite audio system with iPod control and text messaging capability. It sounded good, but the screen washed out on sunny days. Other luxury touches include heated front seats, heated side mirrors, windshield wiper de-icer and moonroof. The high-back seats were firm and comfortable, but not as super supportive as I had expected. 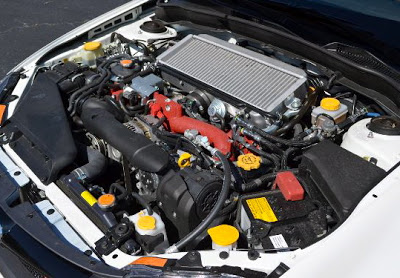 Under the STI’s gaping hood scoop is an intercooler atop a 16-valve 2.5-liter horizontally opposed “boxer” four-cylinder engine rated at 305 horsepower at 6,000 rpm and 290 pound-feet of torque at 4,000 rpm. Our test STI sprinted to 60 mph in 5.5 seconds after we launched at 3,000 rpm to get the turbo spooling. We got an upshift arrow with a flashing red light and beep when the 6,700-rpm redline was close. The engine always had power available, even in sixth gear. Zero-to-100 mph is estimated at 12 seconds. The sound of the tailpipes was a snarl with a bit of turbo whistle, overlaid by the gear whine – it was musical. I appreciated the Incline Start Assist. The clutch pedal spring was heavier but offered precise take-up, even in stop-and-go driving. We averaged 20-mpg on premium. 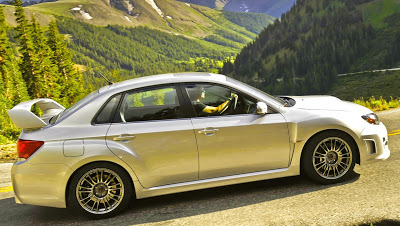 The STI-designed 4-wheel independent suspension has inverted struts in front with forged aluminum-alloy lower A-arms, a crossmember stiffener bar, coil springs and a 21mm stabilizer bar. In back, a double-wishbone type with coil springs and damper units and 19mm stabilizer bar. Ride is very firm, with almost no body roll in a turn. The ride can be a bit jittery on a concrete paved interstate with regular gaps. But tackle a smoother road and the STI smoothens out, rebound handled firmly but fluidly, without any harsh jarring. The STI also has a Driver Controlled Center Differential for the all-wheel-drive, which has a base 41:59 torque split. Sensors monitor steering angle, throttle position, RPM, lateral-g, yaw, brake, ABS and wheel speed to govern torque transfer response. A limited-slip front differential and a TORSEN
torque-sensing limited-slip rear differential handle side-to-side power distribution, helping to prevent the inside wheels from slipping during cornering. A switch and two buttons change
the center differential. “Auto” offers all-round performance as it varies front/rear torque distribution automatically. In manual, the system offers six levels of center differential
locking to vary front/rear torque distribution. 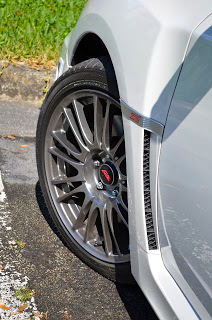 Play with it and you can get the tail out in dirt, which is a lot of fun and very controllable. Set in “Auto,” the STI just arcs into a turn with no drama and only a hint of understeer as all four grab and go. You can power out of a turn, the car grabbing and pulling as you exit. On our skidpad, adding power neutralized it, while backing off allowed the tail to rotate to point the STI where I wanted on exiting. Levels of grip were amazing, even on 4,000-mile-old rubber. Even a bump in mid-turn didn’t upset the STI. The ventilated disc brakes – 13-inch/4-piston calipers up front and 12.6-inch/dual piston in back – had a precise and controllable pedal feel and great grabbing power, repeated hard hits from speed taken in stride with no fade after repeated use. Steering was accurate
if a bit light in feel. 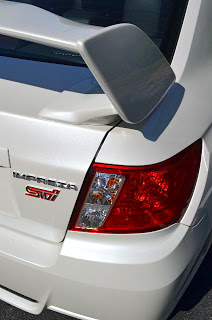 Quick, nimble and econo-car usable – that sums up the Subaru WRX STI. Yes, there are constant reminders that the STI is based on a compact economy Impreza, from the lightweight door and hard plastic interior to the simple trunk mat. Then there’s the less-than-economy fuel mileage, and that almost-$40,000 price tag that takes it away from a lot of its intended Fast and Furious audience. But its absolute sure-footedness combined with its speed makes it a must-have if you want something that has space, lots of pace and grace under pressure. Last word: Tossable fast fun, but expensive!

For more information about the latest vehicles from Subaru, please visit http://www.subaru.com/index.html