Skip to content
‘I’ve got an almost mustard-yellow BMW Z4 Roadster, and everyone seems to want to catch up with me,’ says Dan Scanlan. 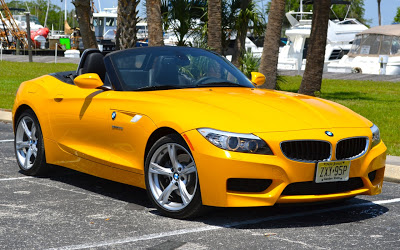 But whether it was the color – officially Citrus Yellow – or the shape or the hardtop convertible on it that tagged everyone’s interest was a question we would ponder during our weeklong test of the smallest BMW. This being prime top-down season in Florida, we had plenty of miles of sweeping interstates, winding saltmarsh roads and oceanfront lanes to drive the BMW Z4 sDrive 28i topless. Let’s see if this BMW lives up to its strong history of agile little convertibles, stretching back to the 1930s and its beautiful 328.

About 25 years ago, BMW introduced its first modern two-seat convertible with the innovative Z1, known for its unique drop-down doors. It never came stateside, but the long-nosed/short tail Z3 roadster did. In 2003, it was replaced by the edgier and longer Z4, done under the controversial, then-BMW’s chief designer, Chris Bangle. In 2009, the crisper rounded lines of the first-gen Z4 were sharpened by designer Juliane Blasi into what you see here. 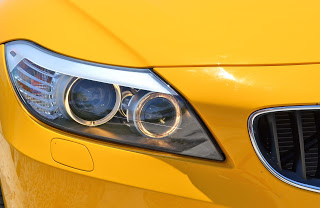 The first thing that grabs you are glaring O-ringed headlights under accent lines that look like angry eyebrows. They flank a classic twin-kidney BMW grille that leads the way on a rounded, upright nose on the very long hood.

Our test car’s M-Sport aerodynamics package added wider front side air intakes whose edges combine with the lower air intake and glaring headlights to give the Z4 an aggressive face. They look even better at dusk, when the
LED rings around the headlights stare at the world. 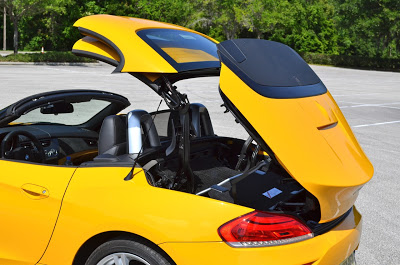 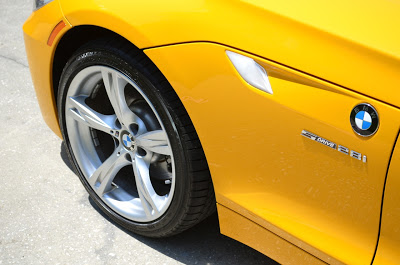 Our Z4’s interior is a visual and tactile feast thanks to its optional Citrus Yellow package. It begins when you step over the alloy M-Sport sill trim and see the hard black plastic dash top with a small covered storage compartment. Under a petite binnacle hood lies a simple
gauge package – 160-mph speedometer with inset fuel gauge and 8,000-rpm tach
with inset temperature gauge framing a classic orange LCD trip computer display.
Then the feast begins with black Alcantara suede covering the dashboard face with
double yellow contrasting stitching.

BMW’s M-Sport package adds heated and nicely bolstered black leather power buckets with Alcantara center inserts accented with yellow dotted stripes. The door panels get more gloss black inserts over yellow suede, while the armrests and center armrest are clad in black leather. We did hours of driving and the seats were comfortable and supportive, both with power lumbar support that was height adjustable plus manually adjustable thigh support. 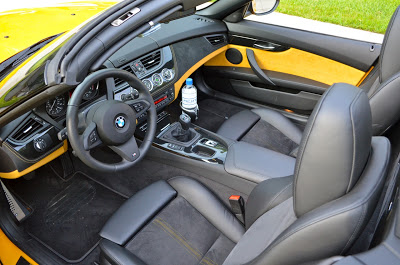 There is a pass-through to the usable trunk, which fit a large suitcase, camera and garment bags and odds and ends for our weekend trip. But since the hardtop’s sides cut into the eight-cubic-foot trunk when it drops, we could never go topless with the trunk full. With a mesh wind-blocker clipped between the roll hoops, top-down wind buffeting was at a minimum. 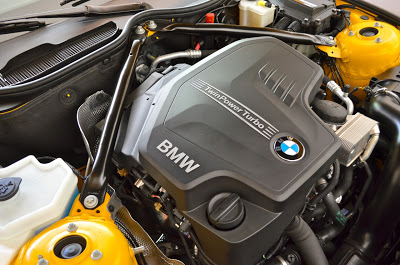 Our 4,800-mile-old test car had plenty of power from that turbocharged Four, which made its presence known with a neat turbo whistle and some wastegate sounds when we let off the gas. We sprinted to 60 mph in 6.1 seconds, with a chirp of rubber in the short throw First-to-Second shift and a healthy engine snarl. We even had some boost and passing power in Sixth at
speeds as low as 40 mph. Our mileage, a mix of highway and urban, was calculated at a
decent 28-mpg on premium, helped by an engine stop/start mode that shuts it down
when you stop. It didn’t work much, though!

Another part of the M-Sport option was the ability to toggle the Z4 between Comfort, Sport and Sport+ modes via a rocker switch on the center console. Toggle in either Sport setting and we immediately sensed a quicker throttle and engine response, tighter steering feel and firmer suspension. That suspension is all independent with a multi-link rear. Sport+ also puts stability control in dynamic traction control mode, allowing more wheelspin and more tail-out action. 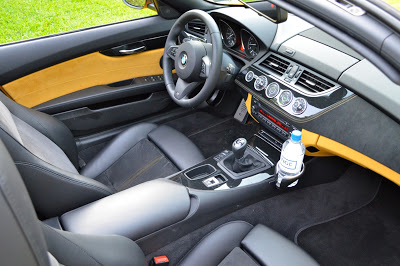 On any setting, the Z4 handles corners flat and predictably, hanging in neutrally. Tackle tighter curves and the Z4 just gripped and hung on, not even unsettled by a drainage grate mid-turn. We tried Sport + on our skid pad and found we could juice the tail out on demand and hold it entertainingly, understeer tunable by throttle – lots of fun!

The 13-inch front/11.8-inch rear ventilated disc brakes had precise pedal feel, great stopping power and good resistance to fade after repeated use. To sum it up, the Z4 was precise, mighty quick, and just a lot of fun to dance with in the turns and off-ramps. 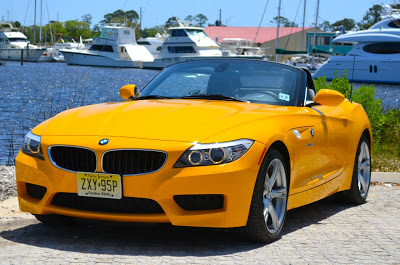 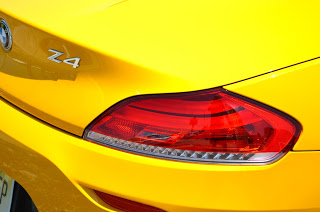 I could do without the yellow paint, but I’d keep the suede interior and M-bits. I love the fluid and secure feel of the car, its instant response to throttle and steering, and its elegantly simple interior design inside its wickedly swoopy exterior. A more modern stereo design and an easier Bluetooth process would be plus-features.

For information about the latest BMW vehicles, please visit http://www.bmwusa.com/